Episode 5 of the Pokémon Sun & Moon anime has aired!

Episode 5 – Popplio, do your balloonest!

The episode starts with Pikachu and Rockruff playing outside of Kukui’s house while Ash is on his way to school. As he walks, Rotom says to Ash that Rockruff likes it when Ash rubs its chin. Along the way, Ash meets Lana and Popplio who are training to make large water balloons. When Ash arrives at school, he opens his bag and Rowlet falls out! 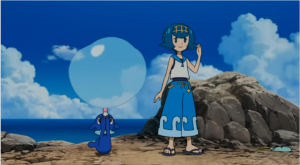 During school, Kukui informs the class that tomorrow they will be traveling to the ocean to connect with Pokémon of the sea. The key to success, he shares, is a fishing rod! Hearing this, Sophocles wonders how Lillie will be able to join them since she can’t touch Pokémon, but Lillie is confident. She says she has a secret weapon, but when Popplio jumps on her she is so scared that she can’t even move. 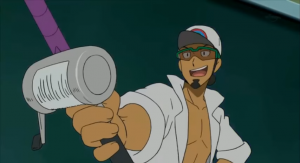 Meanwhile, Team Rocket have been spying on the class. They want to learn Ash’s schedule so that they can (once again) try to steal Pikachu. 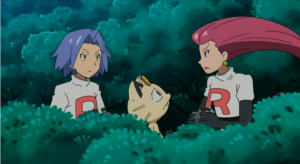 Since Ash doesn’t have a fishing rod, Lana offers to lend him one. On their way to Lana’s home, they stop for a break a Lana and Popplio’s “spot”. Not only do they train here, this place is where Lana and Popplio met!

Through a flashback, Lana is shown fishing with Lapras when she notices Popplio being bullied by a group of Team Skull members. Using Lapras’s Ice Beam attack, Lana freezes the grunts and rushes Popplio to a Pokémon Center.

Initially, Popplio is afraid of Lana. That is, until she gives it some food. Since then, they have become great friends. 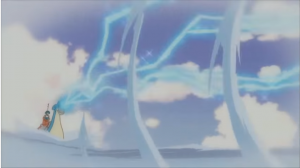 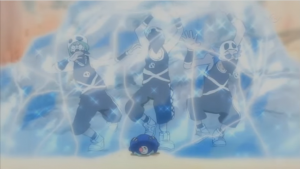 After the flashback, Popplio is once again trying to make a balloon. Lana explains that her dream is to explore the ocean with Popplio in a water balloon, because they want to meet the many rare sea Pokémon down there. 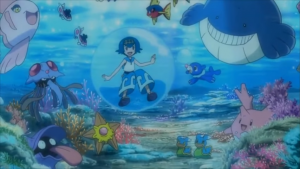 Later, Ash and Lana finally arrive at her house, and Ash is super excited to see a Lapras and visit the sea tomorrow. It turns out Lana has younger, twin sisters named Harper and Sarah. When her sisters see Pikachu, they rush up and begin to annoy it. Angered, Pikachu releases a Thunderbolt that shocks the entire house. 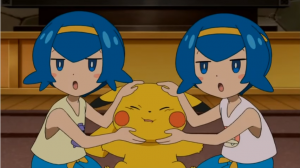 As this is happening, Team Rocket are still spying on Ash but they’ve changed plans. They now want to steal the Ride Pokémon Lapras! 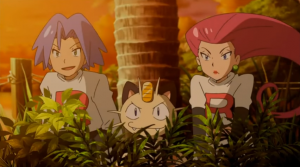 The next day, the class gathers and is ready to meet some sea Pokemon! Kukui declares that Lana will be the teacher today since she has a lot of experience and she is very good with water Pokémon.

Along with the four Lapras, there are also two Wailmer as a Ride Pokémon today!

Once everyone is on a Ride Pokémon, Lana leads them to a specific spot that she explains has a lot of Pokémon species living there. She then jokingly claims that they can catch Kyogre too, which Ash falls for.

Lana then reels in the first Pokémon, an Alomomola! She says that when you reel in a Pokémon, you should give it some Pokémon food so you can build a close relationship with it. She then reels in three Luvdisc, a Finneon and a Corsola! 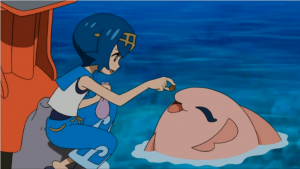 Pikachu then manages to fish up a Magikarp with its tail! Ash tries to grab it, but it slaps him with its tail and escapes.

Later, Lillie gets a bite too, but this time it’s a Milotic and it is pretty strong too. Lana and Ash rush towards Lillie so that they can help her, and Ash jumps to reach her but he crashes with Milotic and it escapes. 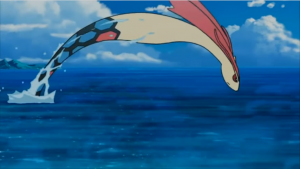 While the class is taking a break from fishing, Team Rocket shows up in their balloon with a large net and steals the Ride Pokémon, the Pokémon Lana fished up, and even Ash’s Rowlet!

With Rotom’s help, Pikachu jumps up high and uses Iron Tail to set the Pokémon free. However, the freed Pokémon start falling towards some rocks! Acting quickly, Popplio creates a large water balloon to save the falling Pokémon. Team Rocket sends out Mimikyu which uses Shadow Ball on Popplio, who reflects it back with another water balloon. Rowlet then uses Leafage, which destroys the Team Rocket’s balloon and sends them falling. At the last moment, Bewear jumps out and escapes with Team Rocket! 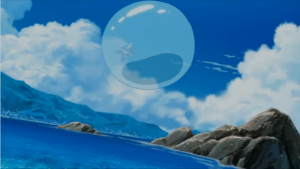 Ash decides to watch Kukui’s house for him. He starts making lunch, but since he’s not very good at cooking, he ends up wasting all the ingredients and has no choice but to head to the nearby shopping mall. There, he runs into his classmate Sophocles and the Roly-Poly Pokémon Togedemaru. But suddenly, the shopping mall experiences a blackout and everyone ends up separated from their Pokémon.

Edited by bobandbill, Lost and Z25.