The fifteenth episode of the Pokémon Sun and Moon anime is out now, featuring Rockruff!

The episode starts with Ash and Kukui returning home. But, they realized that Rockruff is missing and that’s when Rockruff returns home. Surprisingly, it’s injured, scratched and even burned, however Kukui alleviates a little bit of the pain with a Potion.. 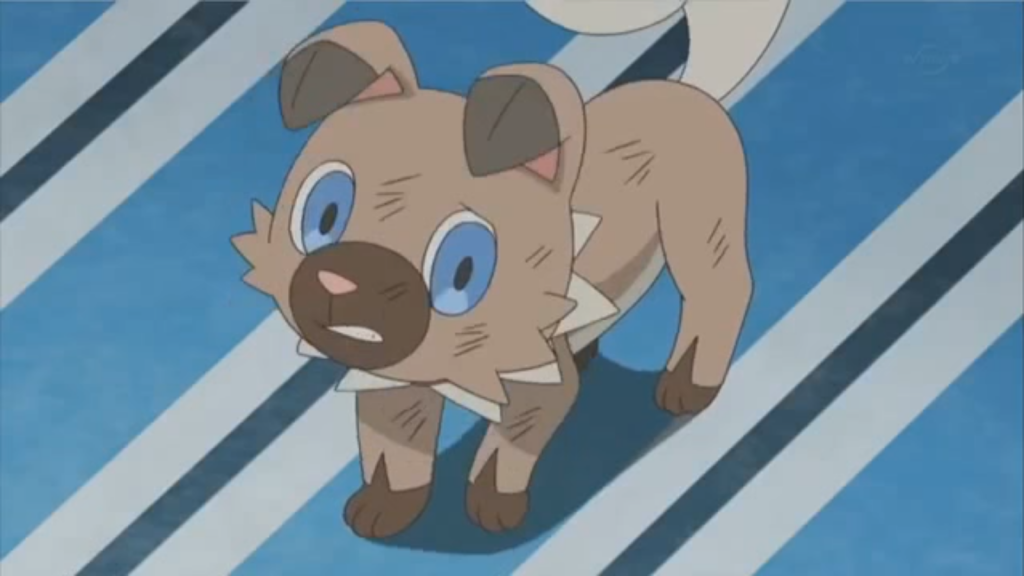 The next day, Ash tells everyone in the Pokémon school what happened. Lillie is wondering why Rockruff isn’t in its Pokéball, with Ash treplying to her that Rockruff isn’t Kukui’s Pokémon, Kukui gave it some food and then Rockruff came with him. Everyone thought that Rockruff was Kukui’s Pokémon because they’re getting along so well. Then Rotom explains Rockruff’s characteristics and introduces the evolutions of it. 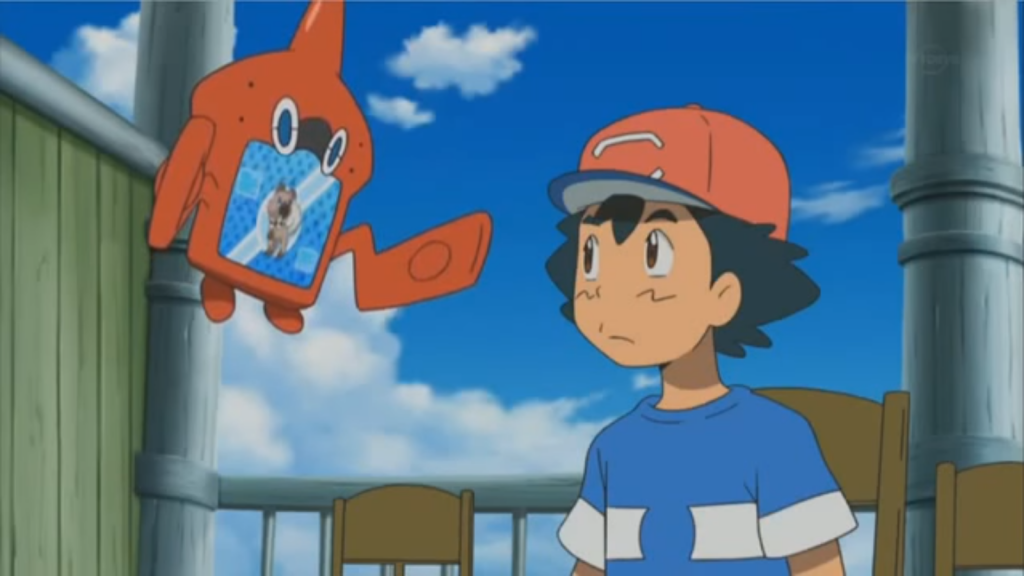 Later, when Ash returns home he sees Kukui worried about Rockruff. Then Kukui reveals that he has set up cameras in the house, so he can see what Rockruff is doing. First, they see that Rockruff was playing with some toys but suddenly Rockruff got away of the house. 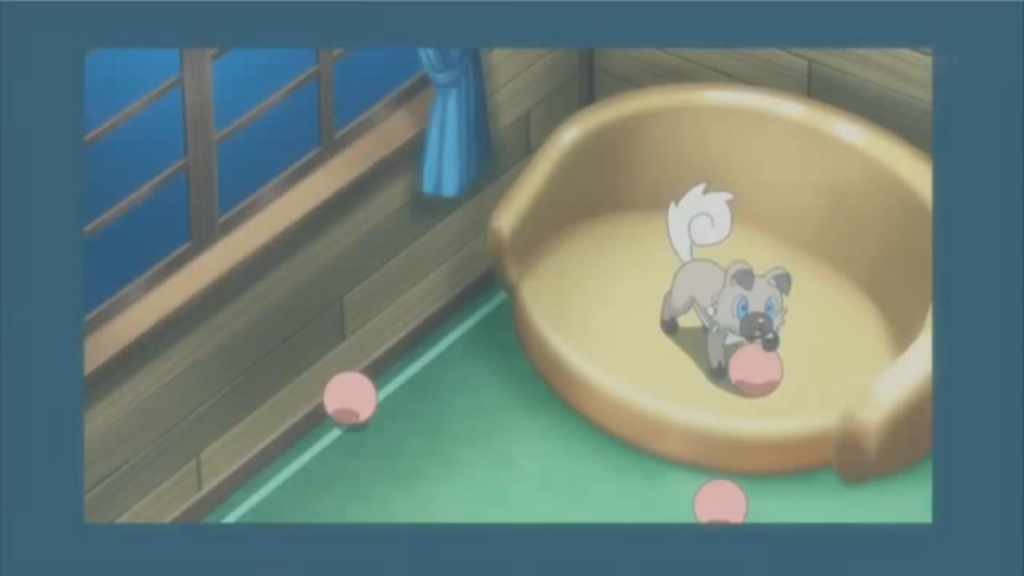 A little later, when it’s night Kukui gives Rockruff a new Substitute Doll to play and he’s leaving the house with Ash. However, they were hiding behind a bush and watching Rockruff with Kukui’s device which is connected with the cameras. Rockruff is getting very aggressive with its new toy and starting to bite it. Suddenly Rockruff runs out of the house again, with Ash and Kukui following it. 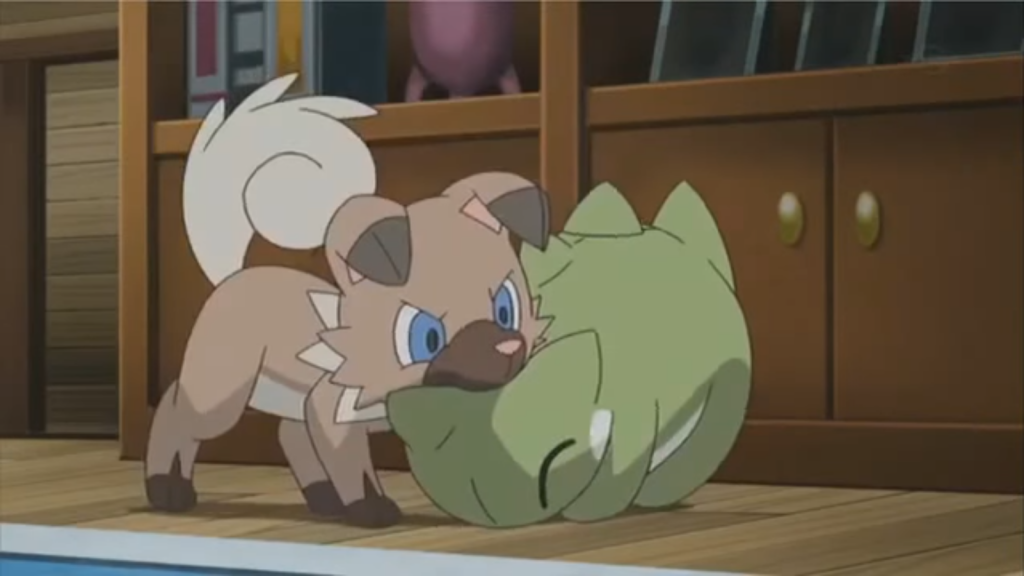 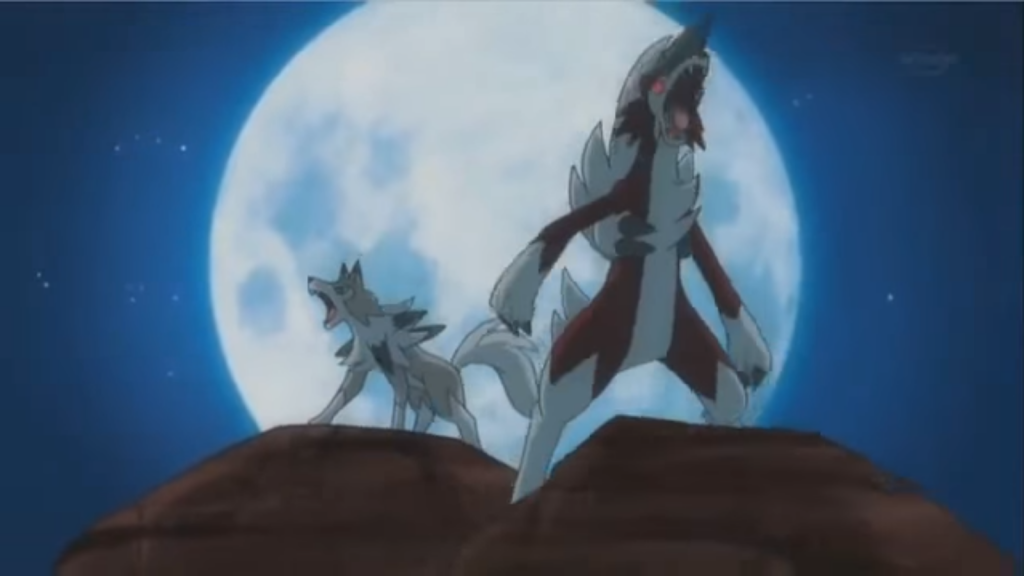 Rockruff wants to battle with a Magmar. Magmar hits it first with a Fire Punch, Rockruff manages to hit it with Bite but Magmar answers with Flamethrower. After that, it seems that Rockruff is about to use a new attack. Before using it, Magmar uses Flamethrower once more but Rockruff doesn’t give up, it uses Bite but Magmar endures it and finishes this with a Flamethrower. Meanwhile, Kukui explains to Ash that these Pokémon aren’t fighting but they’re training. 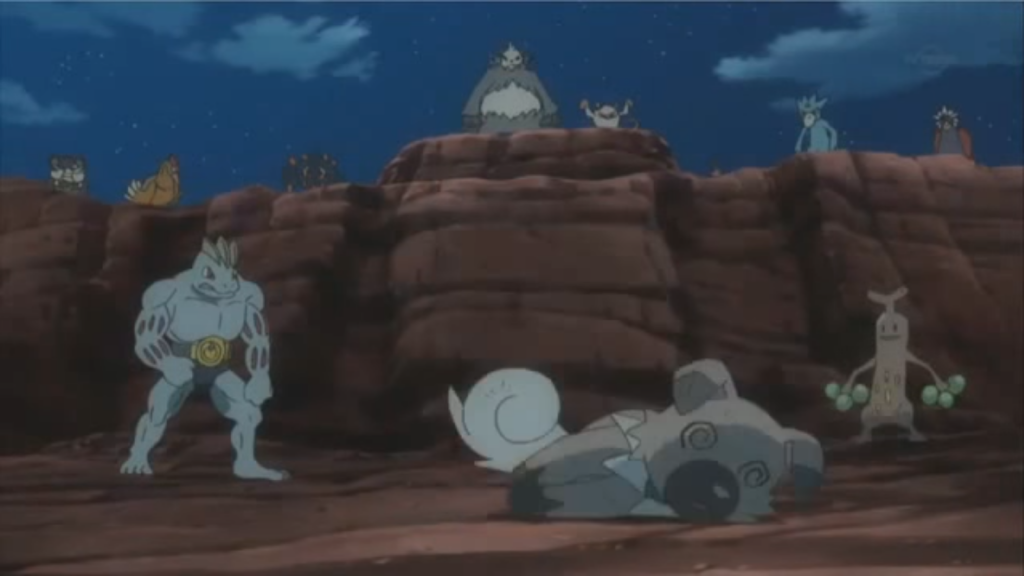 Later, when it’s over and Rockruff is on its way home, it finds Ash and Kukui waiting. Ash encourages Rockruff, saying he and Pikachu are going to help it with its training! 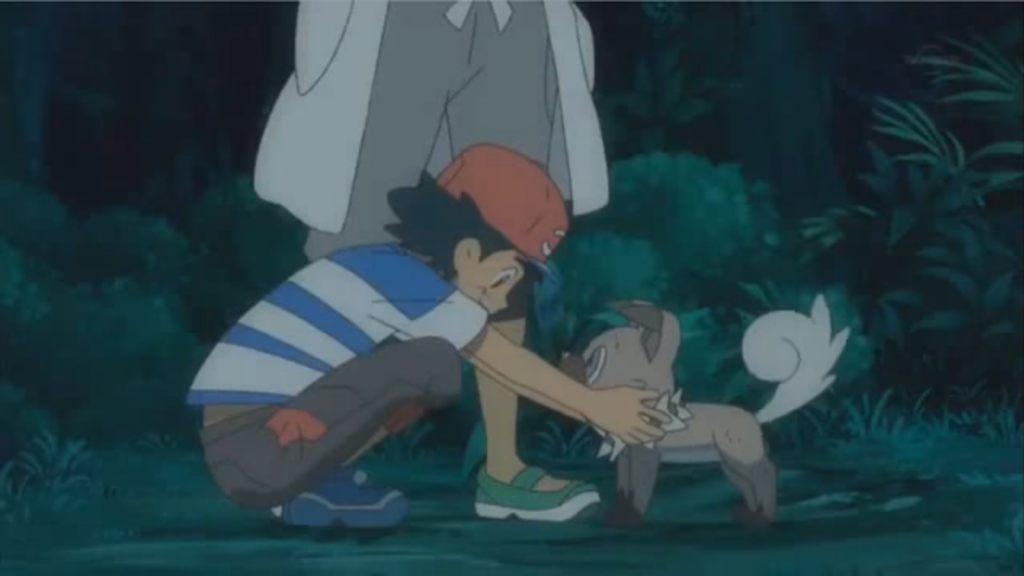 The next day, they’re all at the beach and Kukui says that the move Rockruff is trying to learn is Rock Throw, one of the most basic attacks for Rock Type Pokémon. First, Ash and Pikachu are showing how to charge an attack, with Pikachu showing Electro Ball. Then, they’re starting to run and start their training. Then Pikachu is showing how to dodge with the help of Kiawe and his Turtonator’s Flamethrower attack. When Rockruff gives it a try, its tail gets burned. Later, when all Ash’s classmates are watching, Ash tells Rockruff to try Rock Throw on him. Rockruff can finally do it, it uses a powerful Rock Throw on Ash. His classmates are all surprised to see Ash use himself as a target. 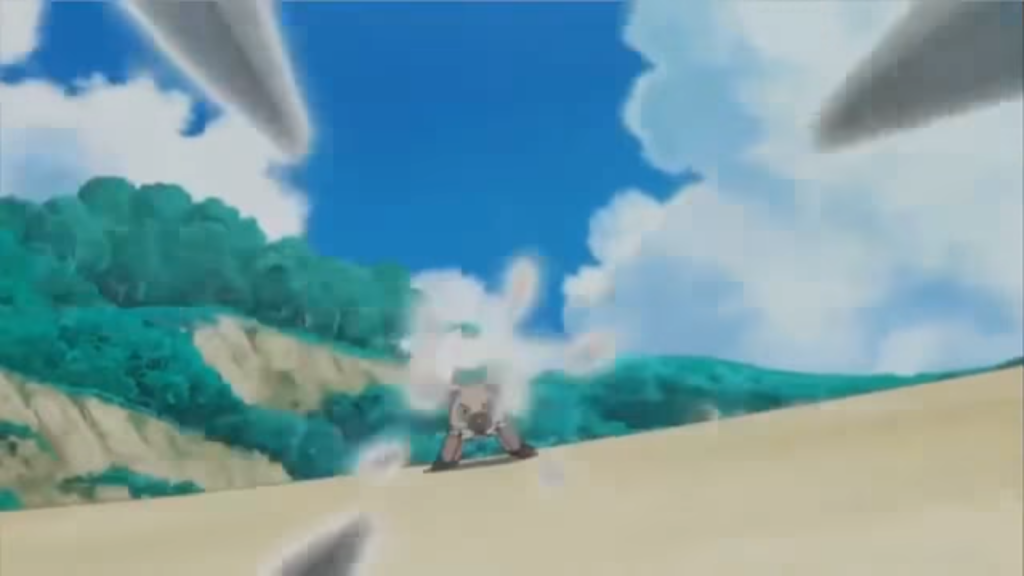 The next night, it’s time for Rockruff to go one more time to the Clawed Hill. The battle with Magmar starts with Magmar using a Flamethrower. Rockruff dodges it successfully and attacks with a Tackle but Magmar counters with a Fire Punch. Magmar is using Flamethrower once more, Rockruff jumps and starting to use Rock Throw but Magmar hits it with a Flamethrower. While they’re both midair, Magmar is using Fire Punch and Rockruff dodges it by bouncing on Magmar. This time Rockruff is using Rock Throw and it hits Magmar. While Magmar is on the ground Rockruff finishes this with a Bite. 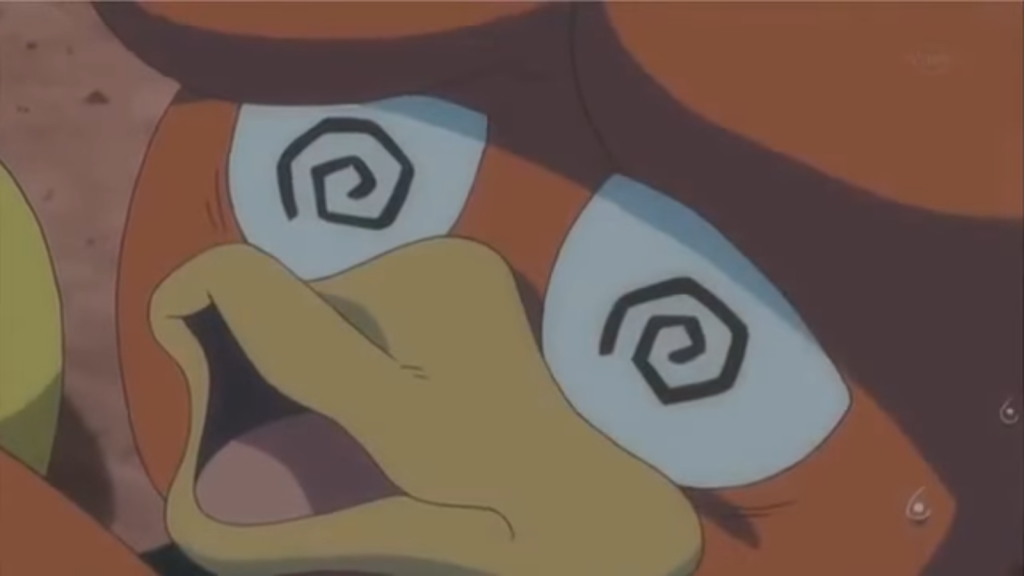 Later, on the beach, everyone is so happy about Rockruff’s win and new move. Kukui is very impressed with Ash’s training and how they’re getting along with Rockruff so he suggests to catch it. Of course Ash can’t deny this and Rockruff is a new member of Ash’s team! 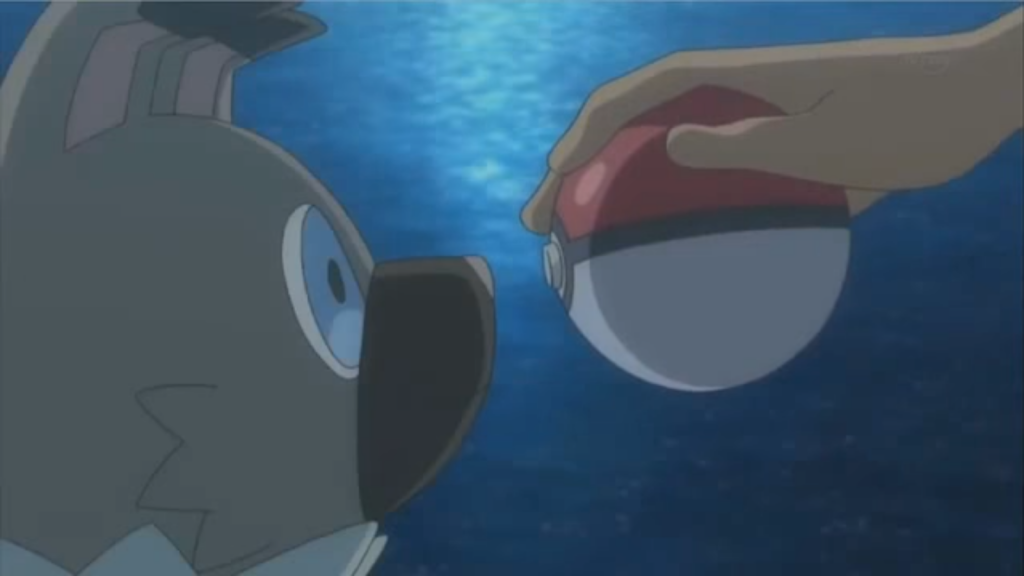 Edited by Volpe Artica and Z25.