Episodes 3 and 4 of the Pokémon Sun & Moon anime have aired. In Episode 3, Ash receives a RotomDex and Team Rocket finally arrive in Alola. Episode 4 centres around Ash’s continuing quest to catch his first Pokémon in Alola.

Episode 3 – Nice to Meet You, I am the Rotomdex, Roto!

Episode 3 opens with Professor Kukui giving Ash his PokéDex, and a Rotom appearing out of his electrical sockets before it jumps into the Dex. It eventually loads up and, much to Ash’s delight, starts talking! The RotomDex can communicate with people, and we see it identify Ash, Pikachu, Kukui and Rockruff. The RotomDex takes photos of Pokémon in order to update data on the Pokémon it sees, and does so with Pikachu and Rockruff. Ash describes the RotomDex as ‘awesome’, but Rotom doesn’t understand what this means before Kukui explains – Rotom then adds it to its own vocabulary.

At the Pokémon School, Ash’s friends are amazed at his RotomDex and take turns introducing themselves and their Pokémon to the Dex. Professor Kukui then lets everyone know that today will be a field class, and everyone will be helping Ash to catch his first Alolan Pokémon. 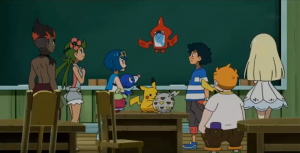 Meanwhile, we see that Team Rocket have arrived in the Alola region. We see a flashback in which Giovanni tells Jessie, James and Meowth to head to the Alola region to catch some new and rare Pokémon. Meowth is seen to be jealous of Giovanni’s Persian, and vows to one day be sitting on Giovanni’s lap himself.

Having had to leave all their Pokémon behind in the Team Rocket HQ bar Meowth and Wobbuffet, Jessie and James set off in the same forest as Ash and friends to try and find some rare Pokémon. The first Pokémon they come across is none other than Mimikyu, who Team Rocket mistake for a Pikachu at first. 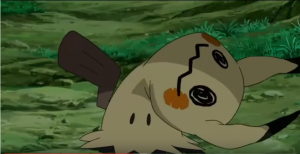 When Mimikyu leans its neck to the side, Team Rocket is freaked out – it is only then that Meowth works out that it’s not Pikachu, but a different Pokémon wearing a Pikachu-like cloth. Jessie declares that she wants to catch Mimikyu and Meowth tries to attack it to no avail as its Normal-type moves do not affect the Ghost/Fairy-type Mimikyu. Annoyed, Meowth tries to pull back Mimkyu’s cloth but a ghastly mist appears, knocking Meowth unconscious. 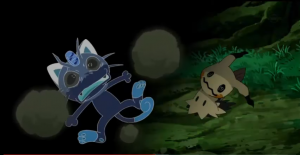 Meowth comes to in a dark cave and walks in a dreamlike state. His surroundings shift from a glorious meadow to a dark abyss, before he finally wakes up for real with the help of Jessie and James. 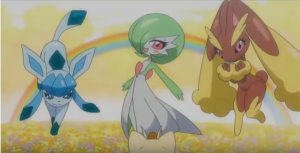 Ash and his classmates then appear and see Mimikyu. Ash decides that this will be the first Alolan Pokémon he will catch, and sends out his Pikachu to weaken the Mimikyu. However Mimikyu deflects Pikachu’s Iron Tail and Electroball with its Shadow Ball. Team Rocket realises this is their golden opportunity to catch both a PIkachu and a Mimikyu, so Team Rocket jumps out, ready to battle with Meowth. Ash’s friends look on in confusion, having never heard of Team Rocket before. 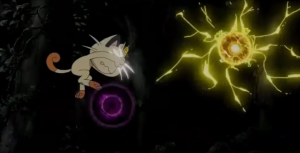 Pikachu tries to attack Meowth but Mimikyu decides it wants to defend Team Rocket, much to their surprise. Jessie orders Mimikyu to use ‘anything’, but before it can do that, Bewear appears and snatches Jessie and James up once again. Mimikyu is poised to attack, but Meowth convinces it that it can attack Pikachu later – what’s important now is saving its friends from Bewear. Meowth and Mimikyu run off to save Jessie and James. Ash and friends breathe a sigh of relief, although they are a bit disappointed, having missed their opportunity to catch a new Pokémon. 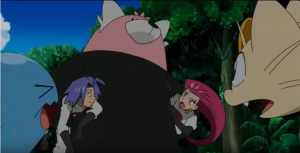 Episode 4 – Enter Rowlet! I Got a Pokémon in Alola!!

It’s this time of the year in the Melemele island, when Pikipek are gathering fruits and berries for the newly hatched Pikipek. Along with these Pikipek there is a Trumbeak (Pikipek’s evolution) and also a Rowlet that seems exhausted. All the locals are helping Pikipek by giving them fruits and berries, however Rowlet picked something that looks like a bell by accident because it thought that it was a berry. 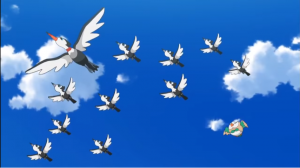 Ash is battling a Grubbin. After successfully dodging Grubbin’s String Shot, Pikachu managed to get a hit with Thunderbolt! After that, Rotom explained that you must throw a Pokéball after the wild Pokémon is exhausted. Ash threw a Pokéball but he failed to capture it and then Grubbin went underground and hit Pikachu with a Vice Grip after using string shot. Pikachu was injured and Ash had to take it to a Pokémon Center. 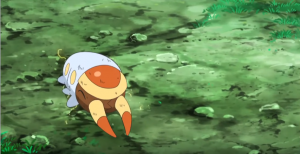 Meanwhile, Bewear took Jessie, James, Meowth and Mimikyu to his nest inside a big tree. Jessie tried to catch Mimikyu two times but she failed. Then James dropped a Luxury ball he had from his collection so Jessie tried to catch it with the luxury ball and she did it. So Mimikyu is the first Pokémon that Team Rocket caught in the Alola region. A little later it seemed like Bewear is a friendly Pokémon because it gave to both Jessie and James some honey to try! 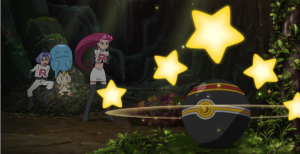 In the Pokémon Center, Rotom gave Ash some information about Comfey, a new Pokemon who acts as Nurse Joy’s assistant. 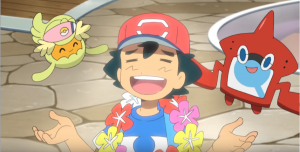 After that, the Pikipek are finally done with gathering fruits and berries from the city and gave these to the leader, Toucannon and the newly hatched Pikipek. Then, Trumbeak appeared and after seeing that Rowlet had a bell instead of a berry or a fruit it started yelling at it, as a result, Rowlet is searching for fruits or berries, this time alone. 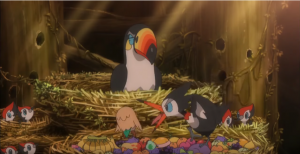 Mallow’s Bounsweet is releasing an aroma which attracts Rowlet whilst it’s confused. Thinking hat Bounsweet is a fruit, Rowlet again tries to get Mallow’s Bounsweet. After that Ash and Mallow realized that Rowlet must be hungry and gave it some fruits; however Rowlet left with a watermelon to go to the nest for the Pikipek. Ash begins to run after it because he wants to catch Rowlet. 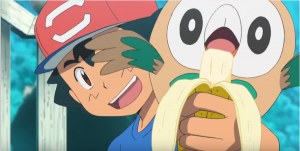 Meanwhile, the Trumbeak and some of the Pikipek gathered some berries from Bewear’s and Team Rocket’s place, causing Team Rocket to become angry. 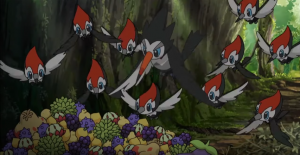 When Rowlet delivered the watermelon, Toucannon and Trumbeak were delighted and that’s when Team Rocket appeared and tried to steal all of these Pokemon and the fruits too. Pikachu battled Mimikyu once more and it seems that Mimikyu is a very strong Pokemon. Rowlet helped Pikachu with Leafage and after that, Bewear showed up and grabbed Team Rocket again. 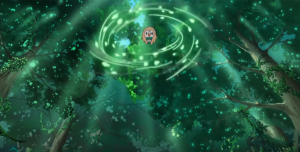 So Ash decided it’s better not to catch Rowlet because it has many friends there but Toucannon actually convinced Rowlet to go with Ash! 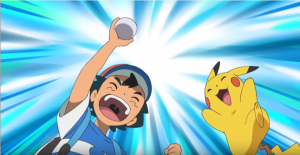 The Pokémon School holds an extracurricular lesson in the form of a fishing tournament from the top of Sea Ride Pokémon! And the teacher is Suiren, who loves Water Pokémon. Since Ash doesn’t have a fishing rod, he and Lana head to her house so he can borrow one from her. They drop by a beach on their way, where Lana and Popplio tell Ash about their dream. And then the day of the extracurricular lesson finally arrives!

Written by Charlie Brown and Kostas.