The thirty-eighth episode of the Pokémon Sun and Moon anime is out, and it features Jessie and her Mimikyu!

The class is finally back in Melemele Island and Team Rocket appears outside of the school and steals Pikachu. Ash decides to use Lycanroc’s Z-Move, Continental Crush, however the Z-Move fails for some reason. Kiawe then uses Turtonator’s Inferno Overdrive and gets Pikachu back! 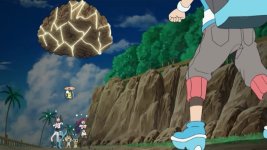 This time, Team Rocket blast off but Bewear doesn’t appear. Jessie and Mimikyu are separated from James and Meowth and land in a shopping mall. Furthermore, Turtonator’s Z-Move ripped Mimikyu’s rag. Jessie buys some Malasada but some Murkrow attack her and steal the Malasada. Jessie decides to use the bag from the Malasada as a temporarily rag for Mimikyu. Then, they go for shopping looking for another rag for Mimikyu, however Mimikyu is unhappy, probably because it wants only the Pikachu rag. 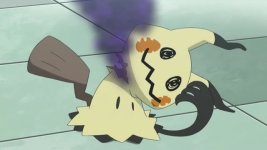 Meanwhile, at the Pokémon School, Ash keeps practising Continental Crush with Lycanroc but the Z-Move is still not working. Professor Kukui says that the problem is because Lycanroc evolved recently and it can’t control its power, so he suggests to keep practising with its basic Rock Type moves! 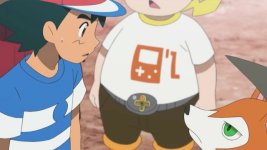 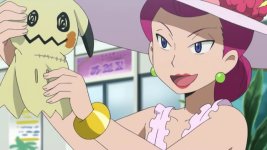 Now, Team Rocket is back in Pokémon school to challenge Ash and his Lycanroc once again! Mimikyu uses Wood Hammer… but on the wrong Pokémon! Once again, Mimikyu tries to attack Pikachu. Now, Lycanroc finally uses Continental Crush and Team Rocket is blasting off again. However, this time Bewear is going to save them! 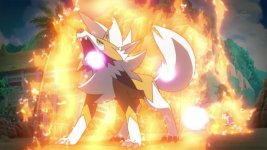