The thirteenth episode of the Pokémon Sun and Moon anime is out now, featuring Alolan Raichu, Noa, Pikachu, Team Rocket and Lillie!

The episode starts with Mallow and Bounsweet doing some training for a Melemele Island tradition. The race is called “Pokémon Pancake Race” and that’s why Bounsweet has a dish with pancakes on top of its head while they’re training. After Mallow explains some things to Ash she then convices him to join the race. 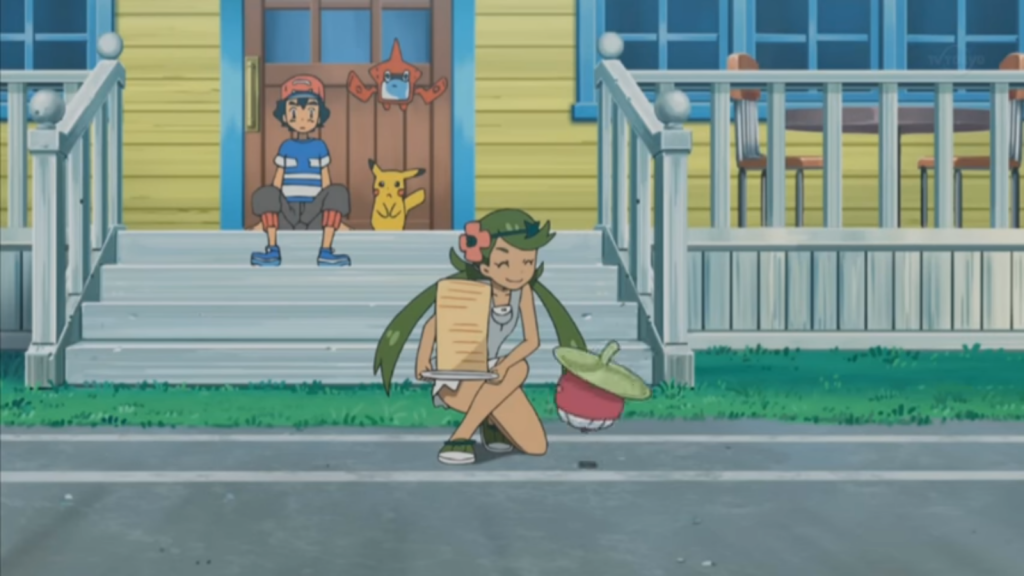 While Ash and Kukui are shopping they decide to take a break at a Pancake shop. There they meet Noa, who won the pancake race with her Raichu last year! Ash is very surprised by Raichu’s Alolan form and new typing which is Electric and Psychic. Ash decides to join with Pikachu and that’s when Pikachu and Raichu begin to see each other as rivals. 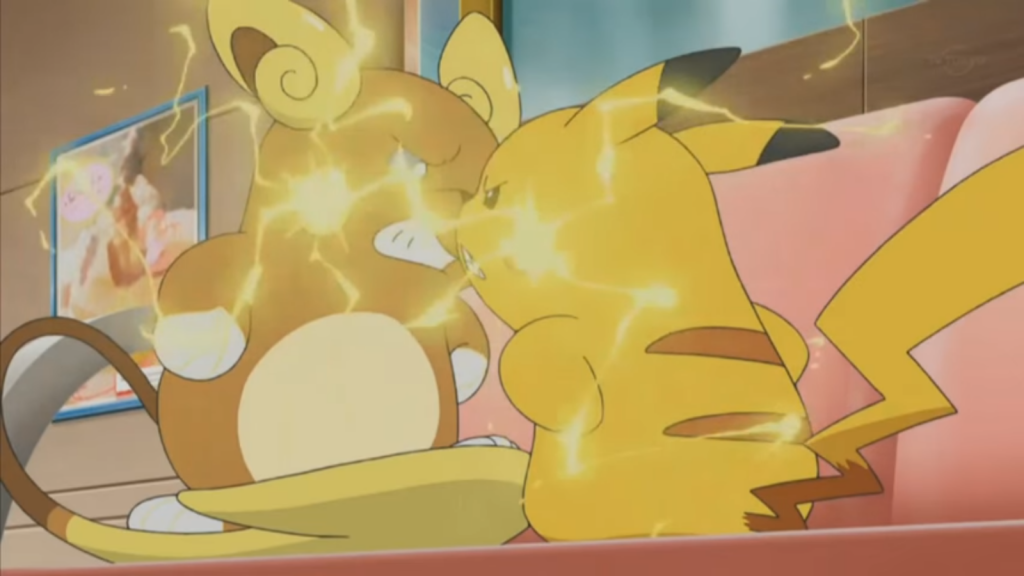 After they finish eating, Noa and Ash are doing some practice for the upcoming race. While Raichu seems to do this very easily, Pikachu gets tired but manages to speed up from 5 km/h to 15 km/h according to Rotom but still loses, and the rivalry between Pikachu and Raichu goes on! 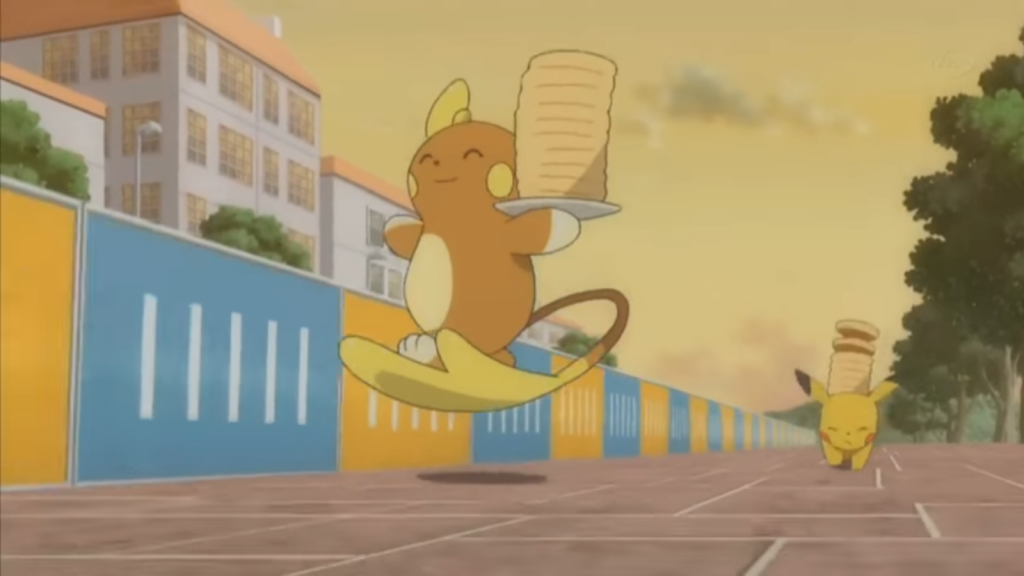 Meanwhile, Team Rocket is watching Raichu and they’re also surprised by the new form of it. Jessie wants to join the race after she learns that the winner will get free pancakes in all the Alola region. 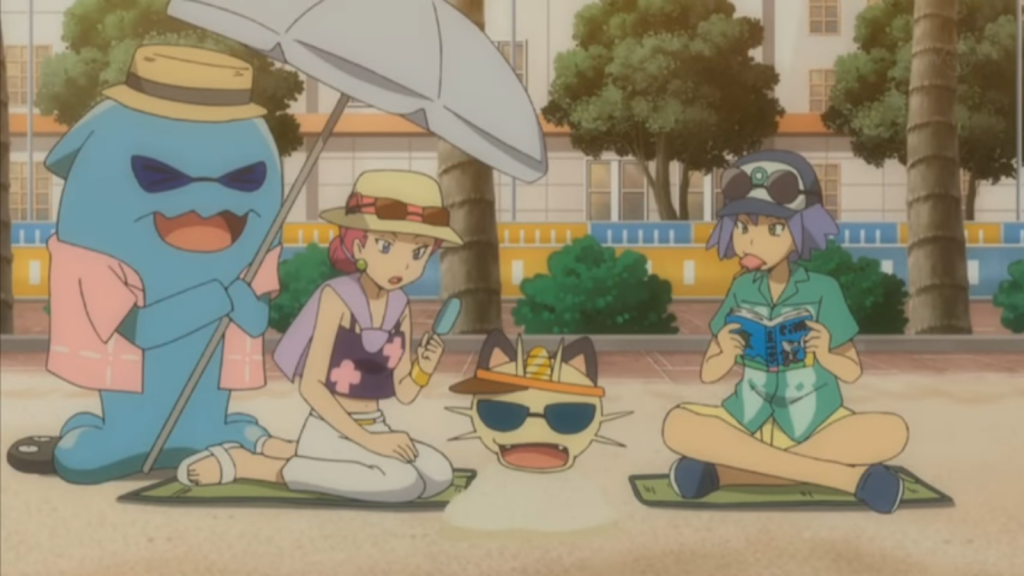 This day finally arrives and Ash, Mallow, Lana, Sophocles, Kiawe, Team Rocket, Noa, Samson Oak and many more are joining the race while Lillie and Kukui are watching it. Oak joins the race with a Komala. A journalist from Alola TV, riding a Magnezone, will broadcast the race but first, she explains the rules. The first part of the race places participants without their Pokémon as they climb a hill and then must proceed to the balance beam and navigate while trying not to fall. The second part of the race has them pull their Pokémon in a wagon. After this, only the Pokémon will compete in running and reaching the finish line. Furthermore, a Pokémon can’t attack another one. 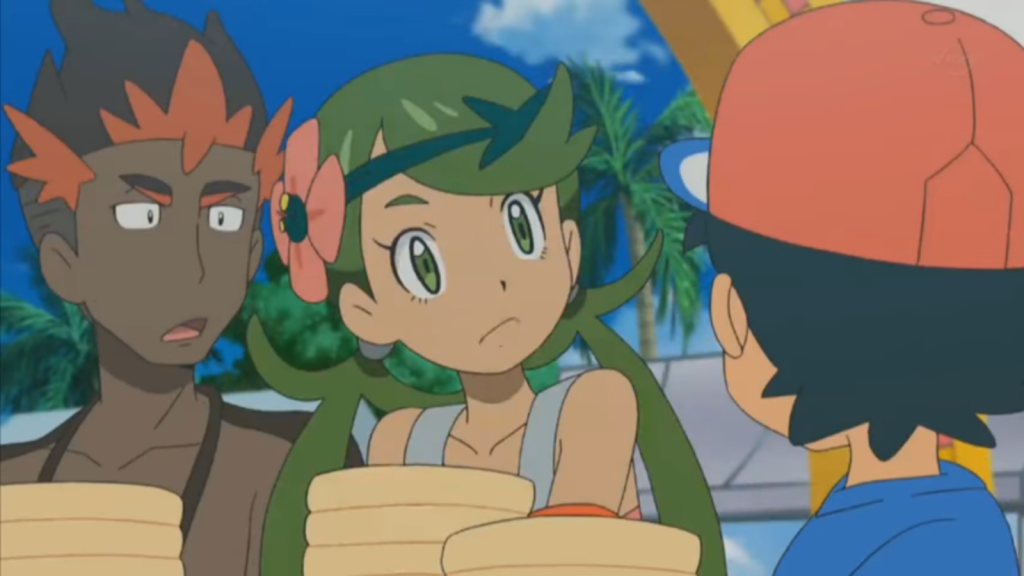 The race starts and many contestants already end up being disqualified on the balance beam, including Sophocles. Just like every year, there are some Muk under the balance beam so they can eat all the pancakes that have fallen. Ash and Pikachu are right behind Noa and Raichu. Pikachu feels something weird and that’s because Mimikyu is behind, aiming a Shadow Ball against Pikachu. Jessie is scared of losing the competition and while she tells Mimkyu not to attack, the wagon keeps falling behind. James is struggling to pull the wagon because he entered with a fake Bewear made of metal and inside are Meowth and Wobbuffet. As expected, Kiawe is also struggling to pull his Turtonator and falls to the ground shouting, they’re not fit for this race. 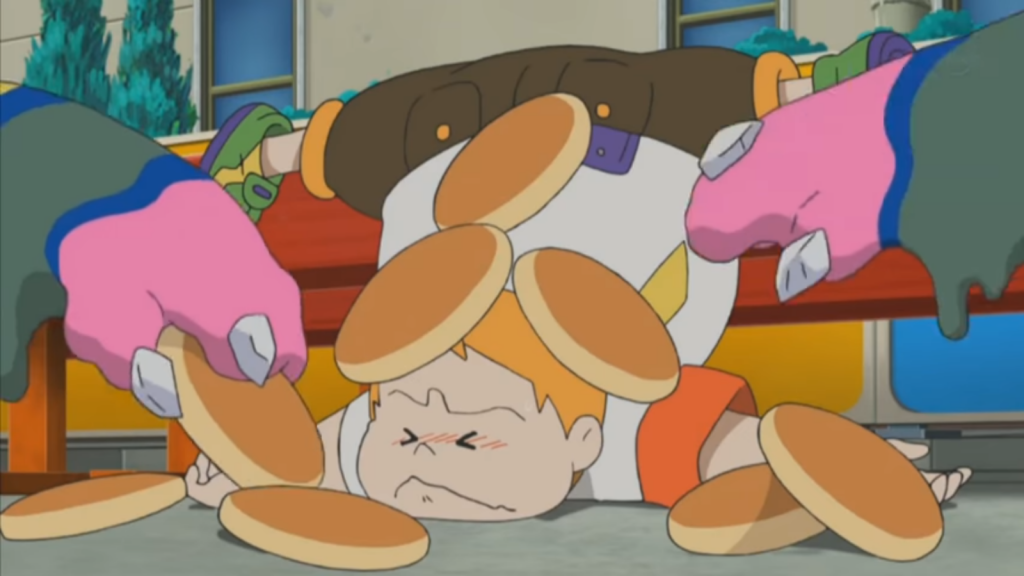 At the next part of the race, while Pikachu, Raichu, Popplio, Bounsweet and Mimikyu are crossing a small bridge, Mimikyu aims a Shadow Ball against Pikachu  again but this time, Bounsweet’s pancakes fall off onto Mimikyu’s pancakes and the Shadow Ball hits Popplio’s bubble, so all 3 Pokémon are out at the same time. 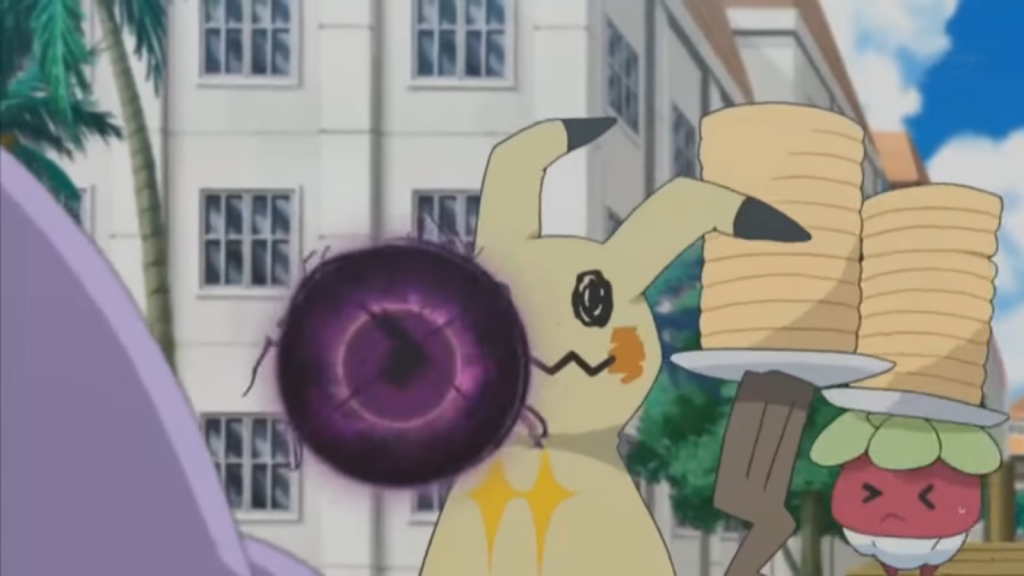 A little later, Raichu is leading with Pikachu right behind it while Komala and the fake Bewear are very far behind. Pikachu catches up to Raichu and now it’s a head to head race. Meowth enables a turbo rocket on the fake Bewear so now they’re first and heading to the finish line. But then, the real Bewear make its appearance before the finish line and it destroys the fake Bewear, sending Meowth and Wobbuffet flying. It jumps and grabs them as well as Jessie and James. Everyone, including Pikachu and Raichu seem very shocked, and as a result, Komala is now in first place. When Pikachu and Raichu realize their mistake, it’s too late. Komala and Oak are the winner, while Kiawe is still trying to pull Turtonator. 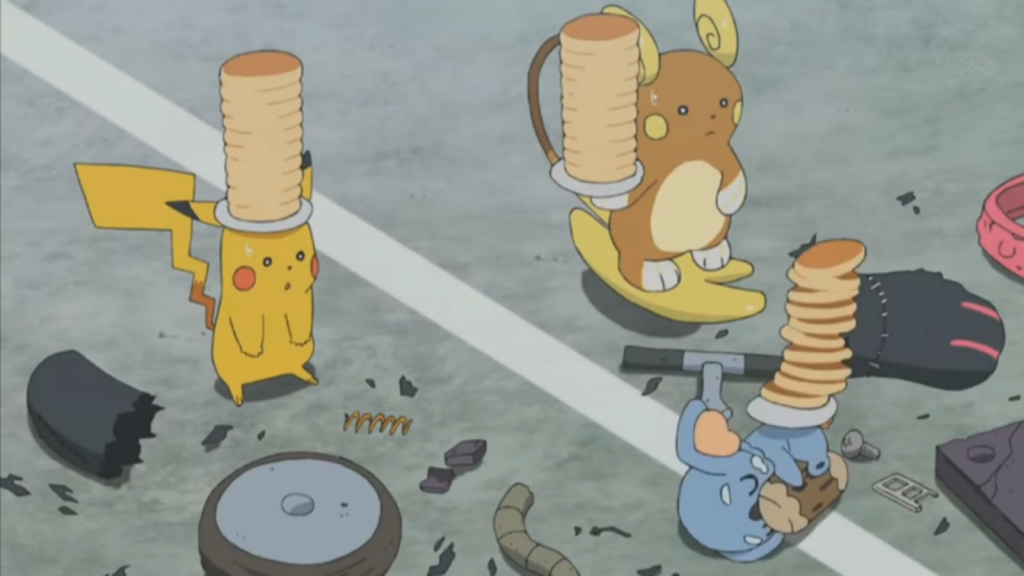 The next day, at the Pokémon school. Lillie says something is happening with her egg. The egg is glowing and it’s starting to hatch. The Pokémon inside the egg is an Alolan form Vulpix. 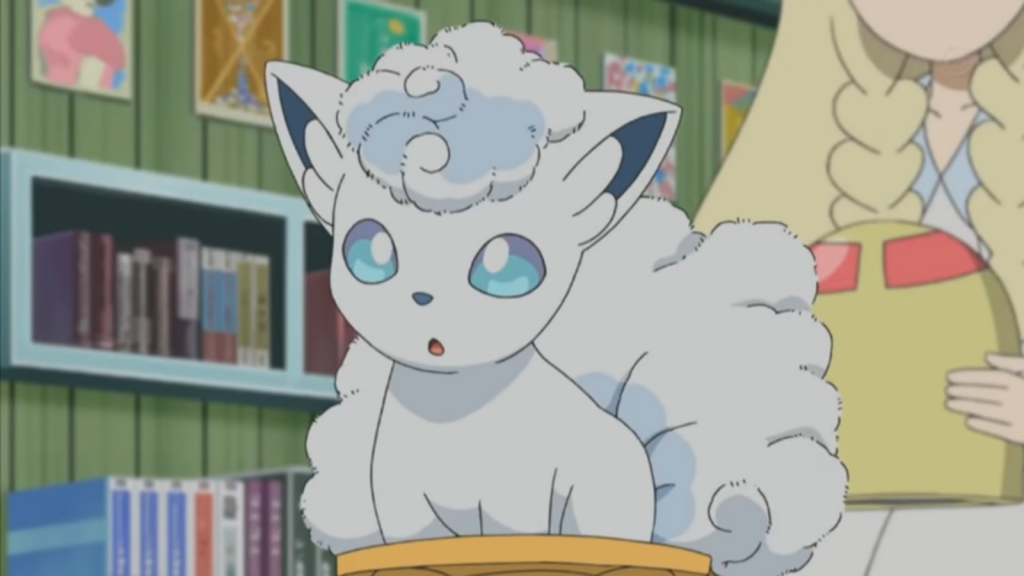 Stay tuned for the next episode!