Thus far, we’ve discussed hidden, obscure and otherwise neat bits of trivia in the second and third generation games. It’s certainly been an eye-opening experience to see what exactly Johto and Hoenn both still manage to hide from a lot of us after all this time! But I gotta admit, something just seems kinda… off, doesn’t it? Kinda like there’s something missing, or maybe something we’ve forgotten? Well, don’t you worry, because we’re gonna fix that! It’s time to pay the region that started it all its proper respects and find out what fun things are still left to uncover in Pokémon Red, Blue and Yellow!

Lost in localization (and the sauce!)

During the localization process, there are quite a few cultural, religious or other types of references in the original Japanese dialogue deemed too inappropriate or obtuse for Western audiences and removed or changed accordingly. Occasionally, though, some small details get overlooked! While the old man blocking the player’s path in Viridian City is said to be in need of his morning coffee before he’ll move in English, in Japanese he’s actually passed out drunk and can’t move until he sobers up. While they took care to make sure this dialogue was changed, the sprite of him laying down with quite the noticeable drunken blush seemed to have gone unnoticed!

In Red and Blue, the player can come across a Viridian City Poké Mart employee on Route 1 who kindly gives them a Potion as a “free sample.” Interestingly enough though, Viridian City’s Poké Mart doesn’t actually sell Potions! This was thankfully corrected in Yellow and all subsequent games, because otherwise it begs the questions “Wait, who is this man and why is he lying to me?” 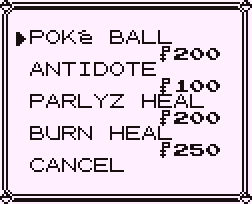 Remember the poor girl in Cerulean City valiantly trying and failing to get her Slowbro to obey, commanding it to use Withdraw, Sonic Boom, to throw a punch, do anything? Well, unfortunately for her, it seems like her Slowbro has a very good reason to be confused after all! While it can learn Withdraw and a punching move in generation 1, there’s no legitimate way for it to learn Sonic Boom. I suppose all we can do is hope she’ll figure it out eventually!

“You say you want an Eeveelution?”

With Yellow granting the player’s rival the multi-evolutionary Eevee as his starter Pokémon, there became a need to determine exactly which of its many final forms would be used in the Champion battle. In the end, the developers decided they didn’t have to choose, the player’s actions could! The rival’s Eevee’s final form is actually decided right at the beginning of the game — Vaporeon if the player loses the first battle in Oak’s laboratory, Flareon if the player wins the lab battle but loses or skips the optional first battle on Route 22, and Jolteon if the player happens to win both battles.

In Yellow, the player’s Pikachu occasionally react to and interacts with events and NPCs in the environment. In Pewter City’s Pokémon Center, Pikachu can fall asleep after listening to the Jigglypuff’s song and the game will actually prevent the player from viewing its stats or depositing it in the PC, giving the message “There isn’t any response…”

It looks like Kanto still has plenty of fun stuff left to figure out and find! There’s just no way of knowing what you’re going to find out next with these games, and there’s something just so wonderful about that, isn’t there? Oh, and by the way, if you have any fun bits of obscure or just plain neat Pokémon game trivia, please feel free to send it our way! You really can’t have too much neat trivia, you know. It just isn’t humanly possible.

Edited by Aldo, bobandbill and Kitty.