Our map is nice, but it’s just a little empty! Let’s fill it up with some people and events to give it some life. Switch to the Events layer by pressing F8 or going to Mode -> Events in the dropdown menus. Your map now has a grid over it! Double-click on a grid square to create an event on that tile. 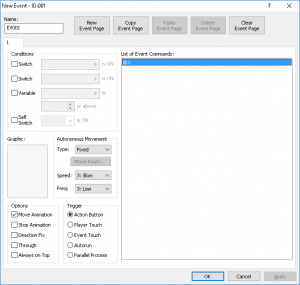 A wild event editor appeared! This thing isn’t as complicated as it might seem at first. Let’s go through it piece by piece.

“Cool but.. how do I actually make my event do something,” you may be wondering. Have a look at your empty List of Event Commands section and double click the empty box to find a new menu – a list of actions that can be added to your event!

We’ll only go over a few of the most useful event commands because there are three pages of them, and on top of that, many of them are intended for use in a Vanilla-style RPG Maker game and do nothing at all (or worse, break the game) when used in Pokémon Essentials. Some of the options on this menu can also be done in better alternative ways with Ruby scripting, and they will be listed on the next page.

Common Events are global events that can be run from anywhere in the game. To create one, open up your database again and switch to the Common Events tab to find a list of existing ones. You can create a new one with event commands in exactly the same way as you would a normal event.

You can use a Common Event from a normal event by adding in the “Call Common Event” event command. More frequently, Common Events are used in Pokémon Essentials scripting, such as Pokégear phone calls, where calling certain NPCs will trigger an interaction defined in a Common Event. Have a look at Common Event #1: “Professor Oak phone” for an example.