Okay, I get that this set is an Invasion. Something about aliens from another universe. But what makes it a Crimson Invasion? I looked at the Wikipedia article for crimson, and the closest thing I found to an invasion was a crimson tide, which is an invasion of a body of water by red-colored algae, causing said water to appear red. But how does that relate to Ultra Beasts? Nihilego is a jellyfish, not an algae. This is all hurting my head…

Well, it’s that time of year again. The new games come out in three weeks, but we don’t get the respective set for another few months. So, what do we get instead? Ultra Beasts. LOTS of Ultra Beasts. Overpowered ones too. But not Celesteela or Pheromosa. Those are promos later. Anyway, I’m out of things to talk about. Let’s get to the article.

I have taken the liberty of meticulously analyzing each and every card in the upcoming TCG set for playability, artistic value, and interesting mechanics. As such, I will be using this article to forgo whatever results I may have picked up from this analysis and just rant about which cards I like and don’t like. So without further ado, here is the fourth full set in the seventh generation, the fourth in 2017 and the Sun and Moon block, and the equivalent of the Japanese Awakened Heroes and Ultradimensional Beasts, Sun and Moon: Crimson Invasion.

Standard Disclaimer: As usual, these are my opinions. Also as usual, some images are of Japanese cards because no one has apparently seen an English version. 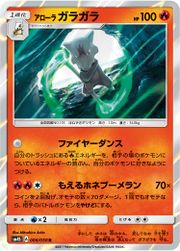 A set-and-a-half ago, I said that Fire needed some good energy acceleration. Well say hello to Alolawak.

For a grand total of zero energy, Alolan Marowak’s first attack lets you attach as many Fire Energy from your Discard Pile as the opponent has energy of any type on their half of the field. In a format of Ho-Oh GX, Volcanion, and other fun fiery things, this could be amazing as a recovery tool in the mid-game or just let you distribute some free energy across the board turn two or three. 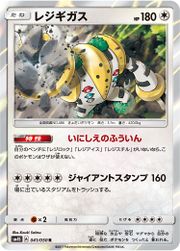 Large-scale multi-Pokémon combos are hard to pull off, but I’ve heard rumors of these four putting in work. The OG Regis all buff each other in various ways, and their type differences allow you to hit many different types for Weakness. Gigas can only do its attack with FIVE energy, and you need to have all three of the minions on the field, but 160 damage unboosted from a non-GX hurts. A lot. 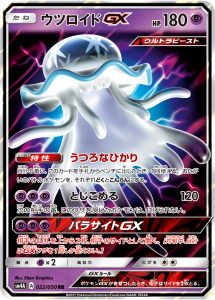 [P][P][P] Symbiont GX: Add the top 2 cards of your opponent’s deck to their Prize cards. (You can’t use more than 1 GX attack in a game.)

I rest my case. 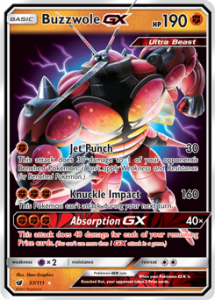 I really thought Furious Fists rotated out like two years ago. SO WHY IS FIGHTING BOX STILL SO ANNOYING?

Buzzy has the semi-unique trait of doing 30 damage (and 30 to a benched character) for 1 energy, which normally isn’t much, but with all the Fighting buffs lying around… 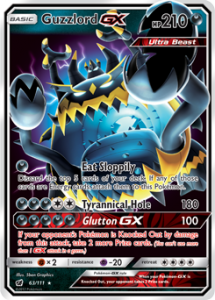 Guzzlord finds your deck most delicious.

Rule #1 of Crimson Invasion Prerelease events: If you pull Guzzlord GX, you are obligated to run that and 39 Dark Energy (with up to two Devoured Fields). I can say with all certainty that this works perfectly and is a fool-proof strategy in the 4-prize format. As in, I did this and went 3-0 in a combined 9 turns.

Outside of this format, Guzzy can still more than hold its own. The first attack is called Eat Sloppily. It lets you discard the top 5 cards of your deck and attach any Energy found there to Guzz-Guzz. This powers it up for its two five-energy attacks. The first is a flat 180 damage (read: OHKOes pretty much everything that isn’t a GX). The second is its GX attack. This is formally known as Gluttony GX. I prefer to call it NOMNOMNOM GX. 100 damage, and if it KOes an opponent, take TWO EXTRA PRIZES. This is, without question, the second coolest card in the set. And yes, I do plan on building Quad Guzz very soon.

Prerelease results not guaranteed if your opponent is actually smart and has Fighting-types.

Wait, Kartana’s name is a play on “katana”! That’s why it’s always a blade. I get it now…

Kartana would like noting more than to slice you in half repeatedly, then run away and hide as to not give up two prizes. This is incarnated through its main attack, Gale Blade. This does 70 damage (plus modifiers like Choice Band and Weakness), and gives the player the option to send Kartana back to the deck. This allows it to re-use its Ability, which allows you to discard a Special Energy attached to one of your opponent’s Pokémon when Kartana enters the field.

The GX attack is undoubtedly the most straightforward one yet: “Take one Prize Card.” That was easy. 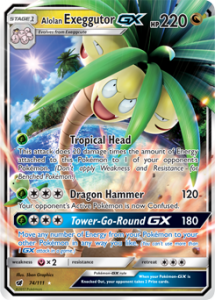 Good news is, that’s the last Ultra Beast. Bad news is, there are still two more GXes to talk about (and that’s after totally ignoring Gyarados GX and Alolan Golem GX).

There have been a large variety of Pokémon based on trees over the years. Most of them have been, to put it mildly, downright awful in the TCG (Abomasnow didn’t even get a Mega). This is quite sad, because trees are really what makes up all Pokémon cards when you think about it. You know, the whole “paper” thing.

Enter, Alolan Exeggutor. This card will single-handedly carry the tree-based characters in this game that is actually just made of trees. The second attack it has is the boring one, so let’s get that out of the way. 120 damage and Confusion for four energy (one of them Grass).

Tower-Go-Round GX is kind of ridiculous. 180 damage for four (again, one of them Grass) isn’t impressive for a GX attack (Lycanroc GX does 200 for three energy), but it also allows you to shuffle around all the energy on your Pokémon. This is also helpful for stacking energy in one place, especially considering…

[G] Tropical Head: This attack does 20 damage times the amount of Energy attached to this Pokemon to 1 of your opponent’s Pokemon. (Don’t apply Weakness or Resistance for Benched Pokemon.)

And we thought Alolan Ninetales’ 50 damage bench attack was good. The temptation here is to say “Decidueye GX, meet your new best friend”, but I honestly don’t know how this will play out. 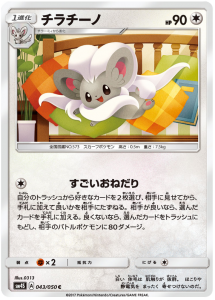 My reaction to this card was roughly the same as my reaction to Whimsicott in the Guardians Rising review. Which is to say, falling out of my chair laughing before saying “What the [explicative] is that thing?” Like, I can’t even write this part of the review I’m still laughing so hard every time I look at it.

Regardless, Cincinno takes the “best attack name”, “best actual attack”, and “overall favorite card” awards for this set with this:

This mechanic first appeared on Togepi from HGSS Undaunted, except it was “ask your opponent if you may draw two cards” and only dealt 20 damage. This card is just a way better version, and dear Arceus is it hilarious.

Will this ever be useful? Nope. Does it matter? Sorry, I’m too busy laughing to answer this question. 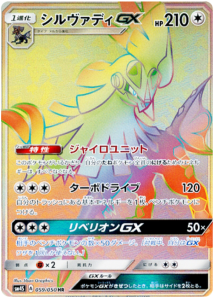 Silvally is the true hero of this set. He is an excellent support for his teammates, but also strong enough to take on the alien menace, the Crimson Invasion, all by himself if it comes down to it. Plus, the Japanese set it serves as the mascot for is Awakened Heroes, further backing up this point.

In fact, the name of its Ability can be viewed as a play on words to further this effect. The Gyro in the ability Gyro Unit probably references the word gyroscope, which explains its affect of allowing you to rotate freely between your Basic Pokémon. However, a Gyro is also a type of Greek sandwich (it also can refer to a genus of moth, but that’s clearly not relevant here). Because Americans are absolutely awful at pronouncing Greek words, the G (correctly pronounced as a YEE sound) often is replaced phonetically with an H, which makes it “Hero”. This is either very clever wording, or an unintentional coincidence that I’m completely overanalyzing. Point is, the thing gives all your Basics free retreat.

As to the ability to fight on its own, Silvally has two great attacks. Turbo Drive allows you to further support your allies with free energy, but it also does a respectable 120 damage. Rebel GX deals 50 for each of your opponent’s Benched Pokémon, capping at 250, which essentially OHKOes the format. Exactly what you would expect from a great hero. 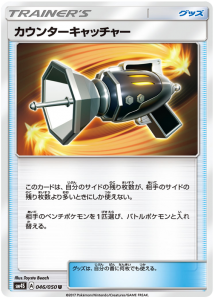 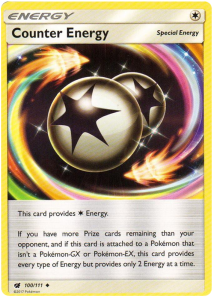 These two cards are unique in that they only work only when you are behind in Prize Cards. Counter Catcher is a further testament to how absolutely broken Pokémon Catcher was before they nerfed it, as it maintains the effect of allowing you to pick an opponent’s Pokémon and drag it up to the front. Unlike Lysandre or Guzma, this is an item. Counter Energy serves as a Double Rainbow Energy when behind (and not attached to a GX or EX). This is a cool mechanic that some decks could certainly have use for (looking at you, Electrode). 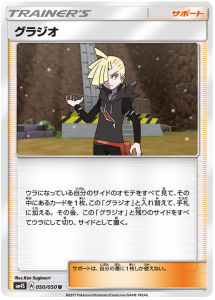 Yes, I actually embedded Gladion’s theme to make a point. And that point is that Gladion is an edgelord.

In fact, Gladion is so edgy that he can’t even deal with something cool being Prized. So, he lets you find whatever you want from your prizes. 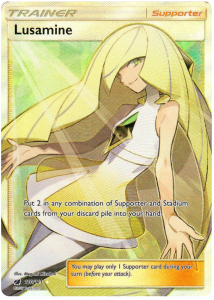 Lusamine isn’t worthy of her theme being here.

Lusamine is VS Seeker except better, but at the cost of being a Supporter rather than an item. How delightful. At least I have a way to get my decent Supporters back again!

All in all, Crimson Invasion looks like a really fun set. It may not be as good competitively as Guardians Rising or Burning Shadows, but it seems like it will have more fun-to-use cards. As such, I rate this set…

That’s all the time I have for today. Join me very soon for another fabulous TCG Set Analysis, and make sure to pick up some cards from Sun and Moon: Crimson Invasion when they release on November 3rd! If you have any thoughts on this new set, tell us in the comments. Good luck trying to figure out how to beat the Ultra Beasts, and I’ll see you in 2018 when we glance into the Ultra Prism together.

Edited by 5qwerty and Radiating.

Guzzlord GX, Buzzwole GX, and Alolan Exeggutor GX images from pokemon.com. Alolan Marowak, Kartana GX, and Regigigas from pokebeach.com. All others from pokelector.com.