“I do intend to return to my own world eventually, but first… I have decided to bring my grand design to this world, as well! I will use the magma-controlling power of the Continent Pokémon Groudon to shrink the oceans and create more glorious landmass! With more dry land to live on, the creatures of the land will no longer have to fight for territory!” – Maxie, Ultra Sun and Ultra Moon

Maxie what are you doing you aren’t even in the set.

This format has been great. Lots of Buzzwole, some Zoroark, more Buzzwole, Rock Doggo, Rock Doggo with Buzzwole, Big Daddy Necrozma, Buzzwole, Not Keldeo-EX, Buzzwole, and more. I played an army of penguins at League all format (except for the one actual tournament I did, where I unironically piloted Quad Guzzlord to 2nd Place). Garchomp was also really cute.

Also, Hoenn. Pretty cool region. It’s also the inspiration for this set. Not quite Sinnoh, but I’ll manage. Anyway, this set has some dragons and stuff. Nothing too awful. We also get a ton of Neo/ex era reprints, which are really cool. Some of them suck. A few don’t.

I have taken the liberty of meticulously analyzing each and every card in the upcoming TCG set for playability, artistic value, and interesting mechanics. As such, I will be using this article to forgo whatever results I may have picked up from this analysis and just rant about which cards I like and don’t like. So without further ado, here is the seventh full set in the seventh generation, the third in 2018, and the equivalent of the Japanese Sky-Splitting Eminence (with a splash of Champion Road), Sun and Moon: Celestial Storm.

Standard Disclaimer: As usual, these are my opinions. Also as usual, some images are of Japanese cards because no one has apparently seen an English version.

Abbreviations – SM7, CES
Cards – 158 + 15 Secret Rares
Dominant Type(s) – Decent balance, but Grass takes the cake.
Card Distribution – 140 Pokémon, 41 Trainers, and 2 Special Energy
Featured Pokémon – Pack art depicts Rayquaza, Jirachi, Stakataka, and Blaziken. Jirachi and Blaziken both appear on their second English pack art and first since the ex era. Stakataka is making its TCG debut, meaning this is its first pack art. Rayquaza, on the other hand, makes its eighth appearance on English packs. The Elite Trainer Box features Rayquaza as well. Theme decks are called Leaf Charge and Hydro Fury, featuring Sceptile and Swampert respectively. Swampert gets its first theme deck feature here since ex Ruby and Sapphire, while this is Sceptile’s first ever feature despite its evolution line appearing inside three theme decks.
Pokémon Debuts – Stakataka or however you spell it
Random Fact – Celestial Storm’s 183 cards make it the biggest English set of all time (not counting Aquapolis’ box toppers). 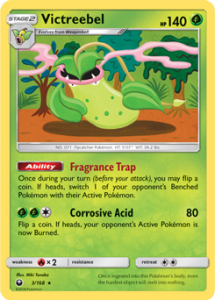 Speaking of Aquapolis, here’s an Aquapolis reprint, jazzed up and ready for two thousand and eighteen with 50 more HP and double the damage. Power creep, bois.

Victreebel’s Ability is essentially Pokémon Catcher. Actually it’s the same text. On a flip, drag something from your opponent’s bench to the active. It’s a powerful effect to be using EVERY TURN. 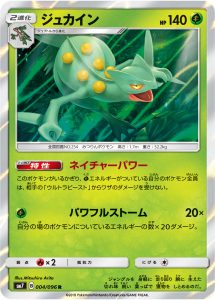 REJOICE, ENEMIES OF BUZZWOLE! YOUR SAVIOR HAS APPEARED AT LAST!

Prevent all damage done to your Pokémon that have any

Energy attached to them by attacks from your opponent’s Ultra Beasts.

Yeah so uh. That’s an Ability. 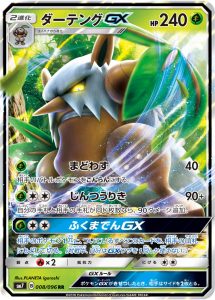 Next stop on the “Man, this card would be REALLY GOOD if Forest of Giant Plants wasn’t banned” train, Shiftry-GX.

With Judge and Copycat lying about, keeping your and your opponent’s hand sizes equal to do 180 damage with Extrasensory is totally viable. 40 and Confusion for 1 grass is also solid, and the GX attack is a better version of Fini’s. 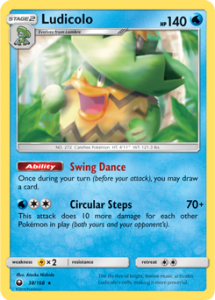 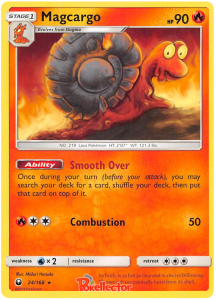 I heard you like ex era reprints? Have literally the entire ex Deoxys draw meta.

Way back when while the dinosaurs roamed and we actually thought Stage 2’s as draw engines were good, the Ludicargo engine was in a ton of decks.

Ludicolo’s Swing Dance lets you draw an extra card every turn. No ifs, ands or buts.

Maggy lets you, every turn, search your deck for ANY CARD and put it on top of your deck, to either draw next turn or Swing Dance for with Ludicolo (this worked okay in Gen 3, no reason it shouldn’t work now). Or, I mean, you could Trade for it with Zoroark-GX or Slush Rush with Alolan Sandslash or Power Draw for with… 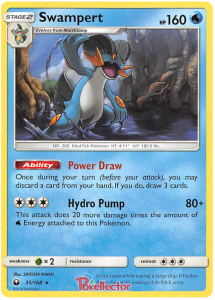 Blaziken was deemed the coolest Hoenn starter by The Pokémon Company, so it is the only one to get a GX. However, Blaziken-GX is not as useful to me as it’s non-GX Hoenn counterparts. Irony is sweet. Just pick Swampert, yo.

Power Draw is literally just a better version of Trade. I mean Stage 2 problems, but… 3 extra draws EVERY TURN. And Magcargo exists. Or Mallow, I guess.

Speaking of which, Magcargo+Swampert is a Theme Deck. Just letting ya know. 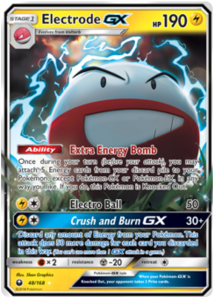 Kill yourself, get 5 energy on the rest of your party instantly. Where have I heard this… oh right this is a reprint too. ex FRLG was a good set. Oh, you can’t use it to put energy on GXes though. However, Rayquaza doesn’t care. More on that later. 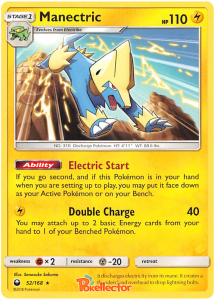 You can start with this as your Active if you go 2nd and it let’s you get a ton of energy out super fast. Which is nice. Rayquaza especially likes it. More on that later. 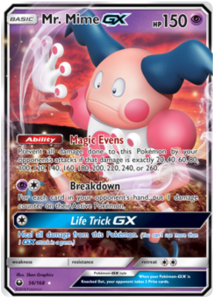 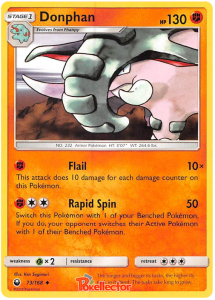 I just like Neo Genesis Donphan art to be honest. There is literally no other reason this card is here besides showing off the the cool art. You may now proceed to the next card. 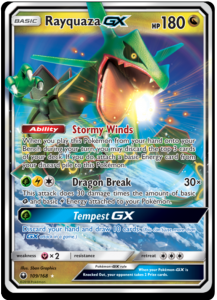 30x the number of all your basic Grass and Lightning Energy in play. That’s a lot of damage. That is all. Tempest GX also makes a decent T1 attack. With all the Lightning-types earlier this set throwing energy around, it’s a simple task to get a ton of Energy out. Also Prerelease MVP. 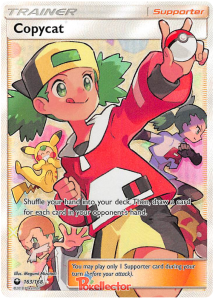 Reprinting Copycat means that the Great Draw Supporter Triumvirate of 2019 (Cynthia, Copycat, and Judge) is actually identical to that from the HGSS era (albeit with Professor Oak’s renamed to Cynthia). At least one or two of these three cards should be present in every deck starting from the Rotation in September.

Hi just wanted to let you know these got reprinted in 2018 so they don’t get rotated anytime soon. Yay! 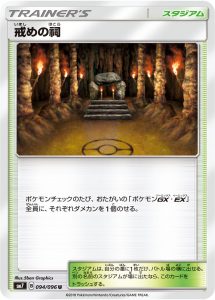 I may have gone a tiny bit overboard with the punishment in the header here but whatever.

Damaging EX/GXes for free every turn is good for us players of low GX count decks. 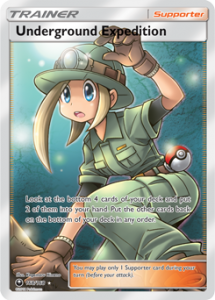 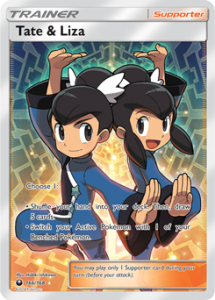 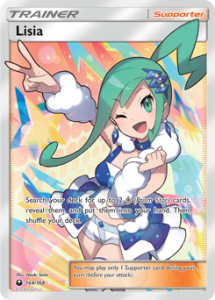 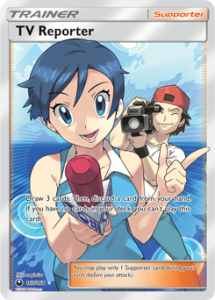 The full-art Supporters in this set are really pretty. Like all of them. But ESPECIALLY Tate and Liza, as well as Lisia. TV Reporter gets special mention because I have one and that’s awesome.

All in all, this set looks visually better than it competitively appears on paper. I love the art, especially the return to the older art style for some of the reprints. That said, there isn’t as much actually playable. I rate this set…

That’s all the time I have for today. Make sure to pick up some cards from Sun and Moon: Celestial Storm when they release on August 3rd! If you have any thoughts on this new set, tell us in the comments. Good luck dealing with Buzzwole and Necrozma, and I’ll see you in, uh, later when we awe at the majestic Dragon Majesty.

Japanese cards from Pokebeach. English cards from pokemon.com or Pokéllector, with the ones from the latter being watermarked as such.