Sun and Moon released for the 3DS nearly three months ago. As such, it is about time the TCG (Trading Card Game) received an update. So hop on Alolan Airlines Flight 822 from Saffron to Hau’oli as the Daily’s TCG Set Review series goes to Alola’s tropical shores for the first time.

I have taken the liberty of meticulously analyzing each and every card in the upcoming TCG set for play-ability, artistic value, and interesting mechanics. As such, I will be using this article to forgo whatever results I may have picked up from this analysis and just rant about which cards I like and don’t like. So without further ado, here is the first set in the seventh generation, the first in the Sun and Moon block, and the equivalent of the Japanese Collection Sun and Collection Moon, Sun and Moon.

OBLIGATORY DISCLAIMER: These are my opinions. Also, decent pictures of the cards are hard to find in English before the set releases. As such, there are Japanese images in their place. They will be replaced soon. 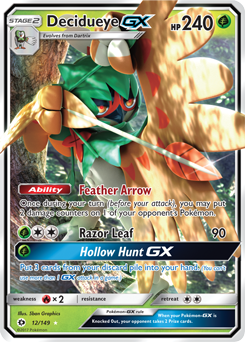 So let’s start with the outright coolest card in the set. Ol’ Deci is my current namesake for a reason. That reason is because it is an owl with a bow and a bowtie. Plus, this art of Decidueye is ridiculously epic.

Anywho, on to the point here. Decidueye has an utterly irrelevant main attack, so let’s ignore it. The first point of actual note here is its GX Attack, Hollow Hunt. This allows you to search your discard pile for any three cards and add them to your hand. This has limitless possibilities. The next thing is its Ability, Feather Arrow, which allows you to deal 20 damage to any of your opponent’s Pokémon once per turn. It’s like Greninja, but without having to discard an Energy. Plus, the Grass GX-Dance is one of the least crazy… Wait, we don’t have to do a silly dance to use GX Moves? Boring.

Lurantis provides a nice damage output to Grass decks. Its second attack does 120 damage and heals 30 from the user for 3 Energy. Its first attack deals 40 damage and also lets you attach 2 Grass Energies from your discard pile to your Pokémon. And its GX Attack lets you OHKO anything that isn’t an evolved GX for 4 Grass Energy cards, or anything that is for 5 Grass Energy cards. To see what fun Grass decks will be now, look at the sheer number of Grass Pokémon on this list and keep in mind that FoGP (Forest of Giant Plants) is still in the format. On a related note…

Shiinotic provides Grass decks some much-needed consistency. It has an attack that doesn’t matter and an Ability that does. Let’s think of a scenario quickly. You have a Fomantis, a Shiinotic, an FoGP, an Ultra Ball, and 3 Grass Energy in your opening hand and you move second. Obviously this is an ideal case, but let’s go with it. Play FoGP, UBall out a Morelull, play it, evolve it, and use Shiinotic’s Ability. This allows you to search your deck for any Grass Pokémon, in this case Lurantis GX, and add it to your hand. Attach the remaining Grass Energy to your new Lurantis GX and use its first attack. Congrats, after one turn you have a Stage 1 GX with 3 Energy on it ready to swing for 120 (or 200 if you get a 4th energy and opt to use your GX attack) next turn, without even using a Supporter or a Shaymin EX. That’s Maxie’s Garchomp level of setup speed.

Can you say mill decks are back?

Seriously though, Tsareena is not exactly fun for the opponent in mill decks, which are designed to deck out your opponent. Its Ability gives a huge amount of hand control by letting you pick a card in your opponent’s hand, like a Special Charge to refresh their deck, and get rid of it. Throw in some Devolution Sprays to let you re-activate the ability, a Skull Grunt or two for even more shenanigans, and a Wailord to just sit there and do nothing, and you have a viable deck.

Because two engines for Grass decks in one set wasn’t bad enough, let’s make an Electric-Type be able to power Grass-Types too! Vikavolt can deal 150 for 4 Energy (after you discard 3), but the main draw is the ability to attach 2 Energy from your deck to ANY OF YOUR POKÉMON once per turn, assuming one of the Energy is Grass and the other is Lightning. Oh, and Grubbin is still a Grass type, which means that FoGP can be used to evolve it to Charjabug instantly, leaving only one turn of Vikavolt setup. Of course, a Rare Candy would have the same effect, but this way is more fun. And so, we reach our first Alolan form on this list, and it’s everyone’s favorite: Alolan Garbodor. Because everyone wanted more of Garbodor!

Anyway, Alolan Muk acts as Garbodor Lite, and will continue to be all too viable for a looong time. The Power of Alchemy Ability is what we are here for. It suppresses the Abilities of all Basic Pokémon on the field, but doesn’t require a Tool. I think this might be a decent idea. It shifts the meta away from Basics with Abilities and into more Evolved Pokémon. The only issue is that Garbodor is still way better, and still isn’t getting rotated for another two years.

This set has been unusually accurate to the games so far. Toxapex acts exactly as Game Freak intended. Poison everything and do Tons of Damage™ to it. Its Toxic Spikes Ability does the poisoning by making the new active Poisoned whenever the opponent retreats. You could (and probably should) just leave it on the bench for this effect, which can be capitalized on by things like Raticate BREAK or Sceptile EX. However, if you must use it to attack, it can do 100 damage for 3 energy to any Poisoned target with Venoshock. That’s a Merciless way to get a Critical Hit for sure!

Note how this doesn’t say Dragonite. Also note that this is the first thing on this list not to be a newly introduced Pokémon or form for Gen 7. We are here to talk about one attack and one attack alone. That attack is Dragon Prayer. For one Colorless Energy, you can attach as many Energy as you like to your Pokémon during your next turn. I’ll just sit back and let you imagine everything that could go wrong here, with Yveltal EX and M-Y Mewtwo EX still in the format. I’ll just give you a hint: Tons of Damage™.

Regardless, this could be an excellent way to accelerate some decks that need a lot of Energy.

El Toro Loco got a sick new coat of paint, and an awesome set of moves that are based around having damage on Tauros. It has three attacks to choose from, each for only a DCE (Double Colorless Energy). The second does 60 damage and not much else. The first does 30 plus 10 more for each damage counter on Tauros. The GX attack does 30 times the number of damage counters on Tauros. Throw this in a Ariados deck or something and see what you can do with it. 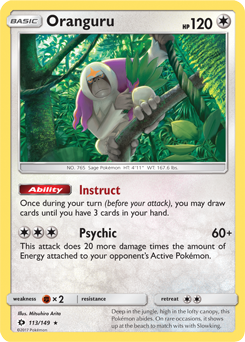 Octillery Lite. It refreshes your hand to 3 cards once per turn and is a Basic.

Lillie acts like the Bianca card, but better and with more development. This applies to both Lillie the character and Lillie the card. We shall take it. Also the FA version is cute and Supporters as a whole look epic this gen.
Editor’s Note: We apologize for ddrox’s bad taste. 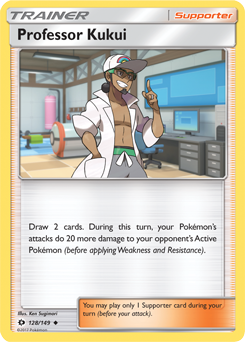 This card allows you to draw 2 cards and do 20 extra damage this turn. This is kind of broken. The ability to do 20 damage extra often is the difference between 0 and 2 prize cards for the turn, and the ability to draw two cards is great as well.

The best evil team is here to drop rhymes and steal Energy, and they are fresh out of rhymes.

No need for long descriptions today, so have a gallery of the bad stuff:

All in all, the SM set is actually decent. I love some of the card designs, and lots of cards look usable.

That’s all the time I have for today. Join me in May for another fabulous TCG Set Analysis, and make sure to pick up some cards from Sun and Moon when they release on February 2nd! If you have any thoughts on this new set, tell us know in the comments.

I’ll see you and some Tapu in the next set, Sun and Moon: Guardians Rising!

Edited by bobandbill, Jake, and Rivvon.