Update: Grafaiai has been introduced with a new pair of trailers and update to the official website.

Grafaiai is a Poison/Normal type – a unique typing! We have some details on how Grafaiai paints and hunts as well: 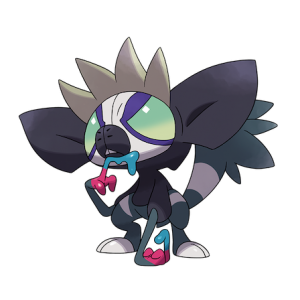 Grafaiai is nocturnal. Once the sun sets, it licks its hands and fingers to cover them in poison, then uses them to draw patterns on the trees in its territory. The poisonous saliva it uses to paint paralyzes Bug Pokémon, which are drawn to the saliva’s sweet, fragrant scent. When dawn draws near, Grafaiai goes to collect any incapacitated prey.​

This Pokémon specializes in using its poisonous saliva—which changes color depending on what the Pokémon eats—to attack foes by spitting at them or by slashing at them after coating its claws with the saliva. When Grafaiai senses danger, its poison rapidly becomes concentrated, resulting in a potent toxin that, once absorbed, will immobilize a victim for three whole days.

A new Pokémon for the upcoming generation 9 titles, Pokémon Scarlet and Violet, has been teased by the official Pokémon Twitter account: Grafaiai.

Remember the markings we shared yesterday? Well, the Paldean photographer has confirmed that these were made by a Pokémon called #Grafaiai!

As you can see, it’s quite difficult to catch in action.

He left us with the promise to have an exciting revelation soon! pic.twitter.com/1IporNVMi2

As stated, we can expect to get a good look at it soon. Until then, we’ll have to make do with these teaser images. At least one can hope we will not get another 24 hour livestream!

It is possible Grafaiai is responsible for the colour on the trees here, which incidentally are based on the Oma forest, a work of art in Basque Country.

If you’d like to see what other parts of Paldea are based on, check out our other article on that very topic!

The real-life inspirations behind the Paldea region

How cute do you predict Grafaiai will be? Let us know in the comments!