It was a morning in early September, no different than any other. Hundreds of spectators flocked to a certain Twitch channel to watch a Pokémon tournament, just as they would for any tournament hosted on Twitch. The chat was abuzz, excitedly making predictions about what strategies may come about and sending good-luck wishes to the challengers. Competitors and tournament staff alike felt their nerves build with each pulse of the dubstep lobby music, the clock ticking closer and closer to the start of the competition. Pre-tournament tension was nothing new, but this tournament was anything but ordinary. It was those very competitors and staff that made this tournament different than any other that had come before it.

The competitive Pokémon scene — specifically, the Video Game Championships, or “VGC” — has been growing steadily since its official inception in 2009. Play! Pokémon, the Pokémon Company’s division dedicated solely to competitive play, began organizing official VGC competitions five years after the video games’ trading card game — “TCG” — counterpart began, but that slow start hasn’t held it back. The rise of streaming combined with notable improvements to competitive accessibility with each new game has helped the community continue to grow with no signs of stopping. Although Pokémon may not necessarily be the first game that comes to mind when you think of eSports, the most recent World Championships — 2019 in Washington, DC — hosted over 300 participants in its VGC division alone.⁠1

But the cancellation of 2020’s London-bound World Championships due to the global pandemic has thrown a wrench into the 2019-2020 competitive season. It’s a small wrench, mind, as players have taken to practicing online, and even Play! Pokémon provides players with the occasional officially-sanctioned online tournament. Yet in spite of all the isolation, a group of women came together to host the first all-women’s VGC tournament.

How It All Started

The ball got rolling on July 27 when Samantha McLaren, an up-and-coming graphic designer and VGC player, posted a logo she made for a hypothetical tournament on Twitter. The young woman, not yet in her thirties, explains that she saw the idea for an all-women’s tournament floating around online, but no one acted on it. Still, she liked the idea so much, she made the logo. The peach and magenta words “Womens Only Tournament” spread majestically over a simple shield, befitting the current generation’s Sword and Shield themeing. Offset hexagons similar to those used by Play! Pokémon themselves during official events decorated the background. “Just to note: This is not real!” McLaren cheekily comments in parentheses2 — but⁠ that was about to change.

“The Tweet started to get more likes, and then past 60 to 70 someone named Phil Nguyen — one of the Australian VGC players — said, ‘Oh, let me put this on Reddit,’” she says enthusiastically. You can see her eyes light up as she names off big-time community members who hopped on board with the idea as the graphic was shared, including Alyssa Smith.

It was Smith who would go on to create the Discord channel for the “event” and bring on McLaren as one of the moderators. “Once she put out the, ‘This would be cool if it were a thing’ logo and it got a ton of attention, I was like, ‘Let’s do this!’” Smith explains. A biomedical engineering student, Smith has been playing Pokémon competitively for eight years, starting off in the TCG and moving into VGC in 2015. “I wanted to host this tournament to create a welcoming environment specifically for women so they’d feel more safe.” She describes how setting up the Discord server was a bit of trial-and-error, unsure of whether it should be public or more private. “We planned on having the server as a safe space for women, so we couldn’t really decide how to set it up. We ended up figuring out that it would be partly public, with a majority private aspect.”

But even with an established Discord server, it wouldn’t be a complete tournament without casters. Still, Smith knew just the women for the job. “We wanted to have women commentate, and we also wanted them to have some experience, so I reached out to some known commentators and they were happy to join!” Smith describes with glee. The tournament’s commentators, Lou Cromie, Gabby Snyder, and Regina Lee, are all well-known in the VGC community. Cromie and Snyder have commentated for official Play! Pokémon tournaments in the past, while Lee has been involved with numerous grassroots teams both as a competitor and commentator.

“I saw the tournament announcement on Smith’s Twitter page and reached out asking to help almost immediately,” says Snyder. “I’ve been hoping that somebody would organize something like the Women’s Tournament for years and was so incredibly happy to see it was finally happening!” Lee shares a similar sentiment. “I was actually asked by Smith if I was thinking of participating or if I could do commentary,” she says. “I was really honored that she asked me to do it because it’s such a big deal to have a tournament like this, to launch and be launched successfully.”

And it launched to a resounding success. On Saturday, September 5, the two-day tournament began. With 174 participants,3 the entirely fan-organized Women’s Tournament was larger than some official regional-level tournaments. Aside from a few stream hiccups — notably due to the LAN setup that Pokémon Sword and Shield use for their series-first spectator mode — the tournament went off without a hitch. When asked for one thing she would change about the execution of the event, McLaren struggles to find an answer.

“Choosing the casters went smoothly, doing the brackets went smoothly… The only thing that was really ‘bad’ was sometimes the LAN setup. But mostly everyone was saying that the tournament went smoothly. Like, after an hour you’re getting a new match. So we didn’t really lag on that,” McLaren explains.

First-time tournament-goer Lauren agrees. “It was even bigger than I thought it was going to be, honestly,” she recalls. “It was really well-put-together, too. I have to say, I was surprised by how seamlessly everything moved through.” Lauren describes how the tournament used Battlefy, an online service that allows players to self-report their match outcomes and help keep the rounds running smoothly. She agrees with McLaren that players were getting a new match every hour thanks to its management. Even the event’s Discord server felt very official due to their unique logos as well as the sheer size of its userbase. For a tournament organized and executed entirely by fans and without any sort of backing from the Pokémon Company, the entire event was phenomenally professional.

But nothing’s ever perfect — for the Women’s VGC Tournament, that imperfection came from naysayers. “My original Tweet had some people asking, ‘Why?’ with a few not-so-okay comments,” Smith recounts. “Going into it, I was really worried about the potential for backlash, which is also why such a tournament wasn’t hosted sooner.” Smith’s plan to alleviate this was the use of very careful wording. “I made sure to emphasize that this was to welcome women and lift them up, not to exclude men or anything. I wanted to be as welcoming as possible because that was the kind of environment I wanted to create.”

McLaren remembers similarly. “They thought we’re ‘segregating’ VGC communities,” she explains, making massive air quotes around “segregating.” “And we really didn’t want to. The tournament was for motivating and encouraging women to play games.”

This kind of backlash comes from the admittedly valid question as to whether video game competitions warrant being “women-only.” Unlike physical sports, there are no grounds for male and female separation in eSports. Rather, the issues are cultural and structural, according to Morgan Romine on Medium.com. “We do not yet have a level cultural playing field in competitive gaming, and that makes a huge difference in who gets the time, support, and space to develop into elite competitors,”⁠ writes Romine.4

Yet this isn’t always obvious to people in gaming spaces. The current reality is, women need not only the encouragement, but the place to play at all. Romine explains that women face excessive gatekeeping, sexist harassment, sexual harassment, and also avoid attending tournaments out of fear that they’ll be the only woman there.5 It’s a dangerous, perpetuating cycle. The assertion that every woman in eSports has been the victim of at least one instance of sexism is repeated often. Even professional Fortnite player Madison “Maddiesuun” Mann tells lifestyle website Shondaland, “A lot of female gamers get driven away.”6 And Natalie Denk, co-founder of “League of Girls” and a research associate at the Center for Applied Game Research of the Donau University Krems says in all her time working with women in eSports she hasn’t met a single one who hasn’t experienced sexism in some way.7

As if the testimonies from countless women in gaming wasn’t enough, a Variety article on women in eSports from 2018 features numerous comments further confirming this. One in particular, from the brilliantly-named “Objective commenter,” simply states, “What if, as unbelievable as it sounds, women don’t like playing games.”8

Well, they got one thing right — that’s completely unbelievable, as the VGC Women’s Tournament shows.

Denk attributes these alarmingly common anachronistic viewpoints with the continued teaching of gender-related stereotypes. “‘Video games’ are seen as an activity with a more male connotation,” she says to Owayo. “This leads, for example, to the fact that it is often not even assumed at first that girls are interested in computer games or could develop them. In this way, stereotypical role models become entrenched.” This, however, goes against the statistics that women play video games regularly, and that nearly 50% of people who play video games “at least occasionally” are, in fact, female.9 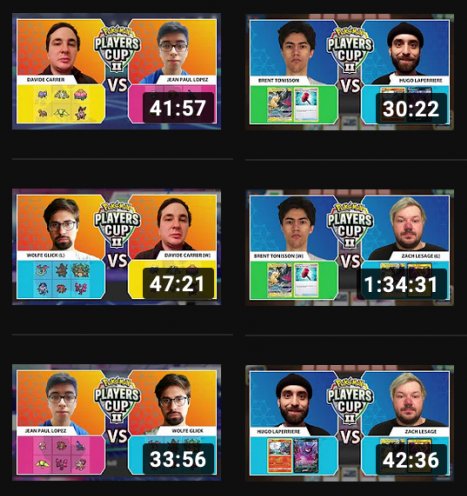 But when it comes to eSports, women simply aren’t there. The lack of role models is repeatedly cited as a major roadblock for women wanting to get into competitive gaming. According to Romine, “You have to see it to be it. … With so few women role models seen on the big eSports stages, too few girls and women ever think to enter competitions,” she writes for Medium. “Seeing someone like yourself succeeding in a competitive space can be a powerful motivator; it enables us to visualize ourselves doing the same and better.”10 And as Mekita Rivas explains on Shondaland, “Just as it influences who rises to leadership positions in academia and business, imposter syndrome affects who enters the arena of eSports. The issue isn’t talent — it’s the sense that one belongs somewhere in the first place.”11

Even Smith notes that in her eight years of playing competitive Pokémon, she observed that women make up only about 10% of the live event population. “I know a lot of women may feel intimidated or nervous about competing,” she says, which again feeds into the negative spiral. But the Women’s Tournament, comprised of 174 female-identifying and non-binary competitors, organized entirely by women, and featuring only female commentators, has given the Pokémon VGC its first big showcase of necessary role models.

McLaren hopes that events like the Women’s Tournament will help women and non-binary players feel more comfortable going to in-person, co-ed tournaments thanks to the space it offers them to practice, as well as the role models it creates for spectators. “Hopefully Play! Pokémon will notice, because there’s just not enough women playing or getting recognition in these tournaments. It would be really cool for Play! Pokémon to recognize their achievements here, and at least show some more women on stream at in-person Regionals.”