Today is not just the day the retirement of eternally young Pokémon protagonist Ash Ketchum was announced. It is also the 25th anniversary of arguably the most famous episode of the same series, number 38: “Computer Warrior Porygon”, or “Electric Soldier Porygon”. Porygon was the focus Pokémon of the episode, but when it aired on December 16, 1997, strobing effects sent hundreds of people to hospital with symptoms as serious as epileptic seizures.

The show immediately went on hiatus for four months. In interviews translated and released this week by renowned fansite owner and translator Dogasu, we have a new appreciation of how Japan, the show writers, and other members of the Pokémon franchise reacted to the events that had threatened the show’s entire existence. Much comes from ‘Pokémon Story‘, a 2000 Japanese book about the Pokémon franchise. This includes an interview with Satoshi Tajiri, the creator of Pokémon.

While I think this incident in particular was truly an unfortunate accident, it’s not like the dangers [inherent] with TV hadn’t always been there. It’s just that we adults had been too careless to realize that the medium’s effect on children was even greater than what we had imagined. I thought this back then, and to be honest I don’t think much has really changed in all the years since. Well, my thoughts on them not changing haven’t changed, is what I’m trying to say. Nobody ever took the time to stop and think about whether or not TV was actually safe for us to watch. Instead, all anyone could think about was how to make the shows more exciting and more shocking, thus making them more money. 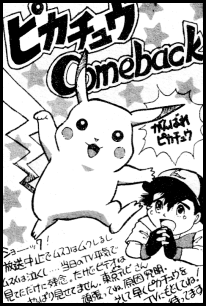 Fan responses can also be read, including from those who had suffered from the strobing effects who still wanted the show to return.

What I’m trying to say is that I hope they come to a scientific understanding of what happened as soon as possible, take care of it, and return “Pokémon” back to the kids who love it. I’m worried that what happens a lot with TV will happen here, which is that a single screw up means the powers that be will take “responsibility” for this and “refrain from airing” the show anymore, leading to it eventually being canceled altogether. But if you cancel the show all of a sudden then it’ll end up really hurting the children who love it. Children wouldn’t accept the “responsibility” excuses we in the adult world would use to justify this, after all. That’s because while adults might see Pokémon as “just another cartoon,” children see it as their “beloved treasure.” Please work hard to pinpoint the root cause and bring Pokémon back as soon as possible.

Let us not forget poor Porygon in all of this. It, and its evolutions, has not had any major appearance in the show. And the strobing effects? They were due to Pikachu using an Electric attack. Pikachu was to blame!

In the end, the series did return, but it would be nice to see Porygon finally get the limelight beyond a short cameo.

Thanks to Dogasu’s Backpack for the extensive translation work!
Edited by Jake, Sheep and Went.