You can read the original article here.

Ever since the late 1990’s, thousands of children across the world were fascinated by the creatures that slipped between the cracks of the sidewalk.

Known as “Glitch Pokémon”, these strange creatures are spontaneously created when a curious player accidentally produces the conditions necessary to spawn an edge case that a developer failed to consider – a Pokémon with no name, who borrows its body and abilities from the world around it like a chameleon.

Its data, torn up and processed through the Creatures grinder, was compressed into a deranged demon, screeching a disturbing cry that terrified any curious and inexperienced Trainer not prepared for the consequences. It did strange things to a player’s game just looking at it, such as multiplying your 6th item over 100 times or corrupting your Hall of Fame data into disturbing images and sounds. Capturing and interacting with this creature only made people ask more questions. Why does it know Water Gun twice? Why did most of its forms seem to cause sprite corruption? And why does it appear in the first place?

Poké-Mania, the cultural obsession with Pokémon in the late 90’s, was the original motor of the online exploration of these strange secrets, and the discovery of Missingno. was the crack that started the cascade.

MissingNO is a programming quirk, and not a real part of the game. When you get this, your game can perform strangely, and the graphics will often become scrambled. The MissingNO Pokémon is most often found after you perform the Fight Safari Zone Pokémon trick. – Official Nintendo Statement

Pokémon and the Internet

After initial success in Japan, Pokémon was released in the West in 1998 after a challenging localization process. Pokémon was marketed aggressively there, with the release of the games, TV show, trading cards and toys all at once. This created an entire media ecosystem enveloping children in a new cultural phenomenon, mass produced and distributed by Nintendo as a gravitational corporate force, hooking up children to the shared experience of the Pokémon world for several years. Pokémon was unavoidable in its anime, trading cards, toys, t-shirts, tie-ins and other mass produced forms – Pokémon demanded centralizing attention.

Spreading on the relatively newly accessible Internet were rumors on how to do tricks in the games, as their popularity surged. This practice of sharing rumors and tales of games through school and childhood friendships was a decades-old practice at this point, as children discussed game tips and tricks they found to impress their friends, and because of limited financial access to different consoles, many children relied on talking to their friends to learn about games they couldn’t play. In this environment, Pokémon was uniquely cradled in the arms of the early internet, finally allowing these schoolyard rumors to become more readily accessible to a wider demographic. 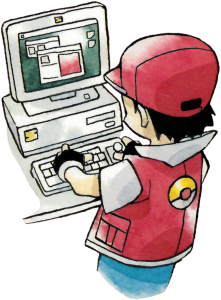 Most players had at least some awareness to the Internet, if not some access to it, by the late 1990’s. On the web, the potential to propagate rumors exploded. This new information network traveling along phone lines united the isolated, spinning wheels of tiny child rumor mills and connected them to a massive machine of rumor production that relayed these messages to the entire world with minimal delay. For each child wired to the internet, either directly or indirectly through talking to friends, there was bound-up potential to accelerate the pathways of the developing Pokémon world initially created by the game’s interface.

Every child’s imagination and direct interaction with the game reinforced the Pokémon world’s own cultural reality, manufacturing the social importance of various characters on the scale of the entire world through their minds. As a result, many myths produced by these children spread quickly. The possibility of a mysterious Pokémon hidden in the game’s code circulated early on, and as a result of this prolific communication, several iconic characters became central to most discussions about the games because of their rarity and power, and rumors of incredibly powerful impossible creatures whispered across the phone lines.

Mew is a famously difficult to find Pokémon, both in the narrative and in the games. Everything about this Pokémon is rare – it cannot normally be found in game and had to be distributed by physically attending events distributing Mew. Mew is found deep in the rainforests of Guyana and is rarely seen. Upon its discovery, it is scientifically declared the genealogical ancestor of all Pokémon, with the ability to learn any technique and even transform into anything – and despite its cute and childlike appearance, it is incredibly powerful.

Even from a development standpoint, Mew was one of a kind – it was shoved in the game in the last two weeks before production, after all debug tools were removed, as a prank for the other developers to possibly find – replacing one of the empty placeholder slots that are left over from development with the new data when nobody was looking. Perhaps with its complicated development and running on a dated console, the developers didn’t think such a small change would matter. Either way, it didn’t matter – there was no way to retrieve the legendary without special distributions.

Making Mew even more mysterious to players was how it was apparently the source of the incredible awe inspiring power of the most powerful obtainable Pokémon in the game – Mewtwo – and harnessing the power of Mew itself was a dream only accessible to those lucky enough to attend special distribution events.

What’s the point of going through all the trouble of the debug process if you’re going to go and fiddle with the game afterwards…? I’d venture that this all came from Morimoto-san’s mischievous nature. – Satoru Iwata

Mewtwo is a clone of Mew, created by Dr. Fuji and his associates as part of a disturbing science experiment. It was designed to extract and clone Mew’s unique genetics and enhance them towards creating the incredibly powerful Mewtwo, with only traces of the experiment found in a mysterious abandoned mansion on Cinnabar Island. Mewtwo was simply too powerful for its creators and broke free from its initial captivity. In an attempt to gain control of Mewtwo for themselves, Team Rocket hijacked Silph Co. to try to steal a powerful prototype – the Master Ball – as the last ditch effort to seize the creature. By defeating Team Rocket and freeing Silph Co. from their grasp, the President of the company rewards you with this powerful ball for you to use yourself.

In contrast to Mew, Mewtwo is often considered the final boss encounter for the game, and can only be seen by anyone who is willing to defeat all the main challenges through the game. It is found deep in the dark Cerulean Cave, crawling with powerful Pokémon, only accessible after beating the most powerful Trainers in the game.

It is encountered at level 70, making it a difficult Pokémon to capture and fight under normal circumstances, but with the previously supplied Master Ball that most players have saved up to this point, capturing it is easy once you reach it. With a base stat total capping at 590, it is far more powerful than any other Pokémon in the game, even Mew. As such, it was seen as a symbol of power among Pokémon fans – and capturing it represented having the opportunity to control that power for yourself, and owning one was a rite of passage.

The Birth of Missingno.

Among all of the excitement of exploring this new world together, these rumors concentrated around the potential for finding rare and powerful Pokémon and items, like Mewtwo and the Master Ball. These myths would be intermingled with a trick that, unlike the rest, actually worked.

Missingno. is an unintentional creature that appears in the Pokémon games because of a series of circumstantial mistakes in the game’s code. Through a well known oversight, Missingno. can be encountered through normal gameplay without cheating devices or other tampering. Unlike characters originally programmed into the game, Missingno’s information is read unintentionally from data in other parts of the ROM, causing the creature to spit out an unruly appearance in many cases.

The exploit that traditionally summoned Missingno. is commonly known as “The Old Man Glitch”, where after talking to an old man and flying to a specific island, strange creatures can be encountered on its shores, including Missingno, its strange twin ‘M, extremely high leveled Pokémon, and Pokémon from previous maps. A similar exploit was found with the Safari Zone, allowing the shoreline of Seafoam Islands to be useful for encountering Safari Zone Pokémon.