The unique way that glitches interact with the core engine of Pokémon gives an unusual opportunity for the production of unique and fascinating creatures that inhabit the world of Pokémon, far beyond the creator’s original intentions. At its core, the Pokémon games are machines that specialize in Creature-Production; it takes inputs from the game state, influenced by player interactions, and organizes information to output as a creature that the player can see and interact with on the screen. Creature-Production is core to the captivating qualities of the Pokémon franchise, as the believability that these creatures existed in a virtual sense, like pretend pet playground, is a mounting point for many children’s engagement for the series, and is based both in how the machine produces the creature and how the player can interact with it. When the conditions are right, Creature-Production can make a completely new creature generated from the game’s own programming – and this is how Missingno. was born.

Missingno. didn’t simply exist in a vacuum. It interacted directly with the player through the game’s user interface. Upon encounter, the player is presented with a strange looking creature with unusual effects on the game. It could be captured and observed. Its properties could be analyzed and interacted with. All of this is contextualized by the same game that Missingno. salvaged its organs from. For players to grasp onto the idea of Missingno. being a Creature, it must not break the world so much that it becomes unrecognizable – it must allow players to interact with it as if it were a Creature. And by sheer luck, Missingno. and ‘M borrowed just enough properties to allow it to exist among the Pidgey and Rattata. Despite its potential to be corrupted, the ability for it to be personified and contextualized within the Pokémon world allowed both a deconstruction of the gameplay and narrative directly through a physical game interaction, and the widespread interest in exploiting or experimenting with the glitch.

As quickly as Missingno. popularized itself over the internet, Missingno. found itself reincarnated into new forms. This image, created in 2003, depicts Missingno. as a flamingo-like creature. In the description the artist points out that Missingno. sounds like “flamingo”, it is found near water and uses water abilities, and has a similar color to Missingno’s pink and grey color scheme. Most depictions of Missingno. that are not directly visually based on the glitch are reality-corrupting birds, because of the strange Pokémon’s Bird type. A notorious example of another bird-like Missingno. is the fake Pokémon “Phancero” found in Pokémon Prism.

Other depictions of Missingno. are based directly on the sprites. Its skeleton and ghost sprites have become symbols of the glitch in many media and are often a subject of Pokémon creepypasta. The original glitchy form is interpreted as a floating enigma that can corrupt reality at will. Missingno, like any other legitimate Pokémon, is frequently personified in Pokémon media – content creators treat Missingno. as a unique and interesting Pokémon more than just simply a glitch, and in the case of some Let’s Plays, it becomes a companion. Missingno. has become culturally synonymous with a glitch character emerging out of code, and has even appeared in cameos in other media. Its character has stood the test of time more than hundreds of other Pokémon, evoking strong cultural significance even beyond Pokémon fans. As a result, these occasional reality glitches have become simply part of the fan lore surrounding the original Pokémon games, entirely against the creator’s intent.

Despite the proliferation of Missingno. as a cultural icon and being more recognizable than many canon Pokémon characters, Missingno. has never been officially recognized as a character by Game Freak or Nintendo, simply being called a “bug” or “programming quirk” to try to prevent customers from potentially damaging their cartridge with the glitch. The games have tried to prevent similar glitches in the future by trying to learn from their mistakes, and refuse to acknowledge its existence, and despite this, the game produced creatures of its own, and the players have accepted it as a part of the strange world of Pokémon. As such, Missingno. represents a physical divide between official Pokémon canon and the world produced by its fans.

20 years later, upon this gradual understanding of the game and harnessing of the power of Missingno. and similar glitches, the Pokémon narrative we were taught from the games is given a new perspective.

Mewtwo derives its strength through the story – we are told that Mewtwo is powerful, and it is powerful because it is purposely made with strong stats, moves and abilities. Mewtwo, encapsulated by this narrative, is only capable of existence relative to the story and games, and fan interpretations are always compared to how the canonical Mewtwo is constructed. It is always referenced or contextualized around this context, imprisoned by its constraints of identity. Mewtwo thus depends on the weight of the circumstances and the world around it to really be such a powerful creature – a consequence of the framework reinforced through the franchise and its games. 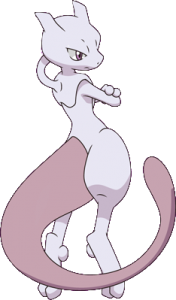 Because of this, as Mewtwo ages, it loses its internal consistency and alienates itself from its original premise of power. When Mewtwo is reproduced in canon, it is reproduced in a closed, proprietary form; dictated by the image and branding of the Pokémon Company, which over time has neutralized its appearance to nothing more than a phantom of its former self, corrupting its cultural programming by overcoding its own repetitions over and over through the minds of players by repeating itself relentlessly in modern media and marketing. It no longer holds the god-like power over any enemy in the game, being outclassed by other extremely powerful legendary Pokémon, and even requiring power ups like Mega Evolution to stay relevant in certain metagames. Its contents have long dissolved into phantom nostalgia. Ever since it was crafted as the reward for the player’s hard work, it became a form of its own capital. Ownership of Mewtwo gave its users power, both socially and in the game itself, through this image. As the games progressed, Mewtwo lost its mystique and became signification of exclusivity among players. It became the optimized prize, losing everything else that defined it in the friction of the process, becoming yet another currency of legendary Pokémon to be exchanged online through trading and battling.

In comparison, Missingno. is a notoriously easy to knock out Pokémon with its low defenses and poor moveset, but its power isn’t derived in its performance in battle. Missingno’s ability to corrupt item quantities allows a player to replicate the most powerful items in the game at will, producing over a hundred of each at a time. By abusing this glitch, the player can carefully underflow the inventory, allowing them to corrupt a huge part of RAM carefully to their will. Through this, they carefully retrieve the 8F item, configure a bootstrap through their own Pokémon Party, and from there are able to write any application they desire. Mewtwo can do nothing but submit to the absolute and totalitizing power of Missingno. and its ability to completely change the world at will. To Missingno., Mewtwo is nothing more than another set of data to possibly corrupt, another tool to use towards creating nearly anything the player desires. When the arbitrary code is executed, Mewtwo can only watch helplessly as its body instantly dissolves into becoming a game of Pong, or having its bytes manipulated by creating a memory editor in-game.

The glitches that allow Missingno. to be encountered can reproduce Mewtwo like a printer under the right conditions. Within less than two years, players walked through the narrative structures that were able to contain Mewtwo’s power, liberating its image to be created at will, freeing it from its narrative identity. Mewtwo was no longer a creation of experiments gone wrong, it was simply another result of Creature-Production, a process in the game that could be exploited to do anything.

Several years ago, Pokémon Red was independently disassembled completely – the result of decades of progress and research, and a powerful tool to discover even more technical details about the games. The process effectively freed the territory occupying the code since 1996, producing a set of extremely talented programmers who, knowingly or not, turned a video game inside out to free it from the proprietary grasp of Nintendo, starting with challenging the genealogical narrative they were served, to forcing the game to serve the player; transforming the culture players were given into their own creation. With the recent repeated wave of nostalgia-baiting merchandising that The Pokémon Company has been responsible for in the last few years, the brand attempts to recolonize the minds of their old fans for profit, privatizing their childhood experiences encoded in branding, with much success. But during the lull of Pokémon hype, a group of talented programmers emerged from the cracks, who defied the Pokémon canon by exploring the strange tickings of the machines inside and distributing its internal organs across the whole internet for the world to share, in a decades old tradition, in active defiance of the accepted canon.

The incredible power of the distributed force of an online community of glitch enthusiasts, ROM hackers, speed runners and others were able to replicate with near perfection the original source code of all Pokémon – the code itself. With just a hair obtained from these chance edge case encounters, they had enough information to reconstruct most of the game themselves – the differences unseen, they filled in themselves. But what they created wasn’t just a mere copy of the original. It was reformed, experimented with in new environments. Through decades of experimentation of RAM shredding, gameplay manipulation and sharpening the skills of the community, the unthinkable was achieved. The game gave birth. They uploaded the results online.

What makes this “Mewtwo” so different from the one we were told about in the virtual world so long ago is one important difference – in the Pokémon world, there is only one Mewtwo. Even if it is incredibly powerful, its power can be contained by a single Master Ball. By the events of Gold and Silver, most of the evidence of Mewtwo’s existence is erased from existence through nature reclaiming itself. But in our case, the disassembled code has been replicated many times, used for experimental programs, influencing dozens of developers, and starting discussions. This Mewtwo is being readily copied, over and over, something the original developers never anticipated, through multiple dimensions. We have already lost control of our creation. Who knows when they’ll strike back next. 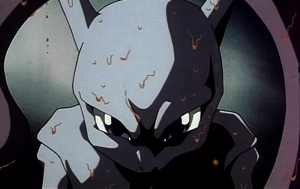 It should be noted that for this narrative, I only offer an incomplete picture of the rich history of glitch hunting, and shouldn’t be considered comprehensive. I encourage readers to learn more in their own time by viewing the archives. There are many glitches and stories I left out of the discussion for the sake of brevity. Special thanks to the Glitch City Laboratories Discord Server for helping with sourcing and fact checking.

Images were sourced from Bulbapedia and Glitch City Wiki.

“Machines and Pokémon” is a series that analyzes various Pokémon media through exploring the interaction between players, lore, social interactions and the physical games themselves as a larger system.