Pokémon Green Remix is a fangame made by Zeak. It sets out to remix the Kanto region, creating a new experience by modernising the game mechanics and Pokémon as well as offering new areas to explore.

I recieved version 17 from Zeak and promptly played through it for a few hours. Keep in mind that the following review is just my opinion. And I still advise you check out the game itself. The game is still being updated frequently and as such many of my statements might have been fixed.

The game starts off with a good presentation. The opening title screen has a nice background and graphics to it. On top of that the introduction with Professor Oak is similar to the one in the original Kanto games, but set in the overworld with a nice little cutscene of Oak walking with the sprites dynamically changing.

This presentation works well since it takes the source material and changes it around to give it new life and charm, whilst still remaining faithful to what it is adapting.

First of all I want to get this out of the way since this point is entirely subjective. I can’t stand Kanto.

I have seen Kanto quite a few times over the years, and truth be told, Kanto is just a very boring region for me. I have tried a number of Kanto fan-games, and none of them so far have managed to make me enjoy Kanto.

Green Remix does change around the locations a bit from their original counterparts. Some of the maps are more convenient and not as cramped and some new areas have been added and overhauled. For example, Mt. Moon has a new area added to it, which I will get into later.

The game is still very faithful to the originals and the locations are easy to recognize as their original counterpart. To a certain degree it’s great for people who like Kanto. But there is not enough change to breathe enough freshness into what can, for many people, feel like yet another redundant trip to Kanto.

So if you’re a sucker for Kanto, I’ll gladly let you know that you get what you bargained for.

Alright, so I am not a big fan of Gen I’s roster. And given how all the Pokémon I encountered so far were Gen I, with the only exception being my starter, I didn’t enjoy the roster available. I am aware that Delta types and Randomizers are available, but I’d rather experience the game as it is without these to judge it on how it was balanced without them.

Let’s talk about the music. Because it honestly isn’t great. The music is an assault of messy piano tracks stacked on top of each other that is hard on the ears. It’s like someone took a track and ran it through a MIDI converter and all the instruments were turned into pianos. The tracks are remixes of the original music, but they are butchered so badly I just prefer to play without music. Even with music on however, some areas completely lack music and it sucks out so much atmosphere from the game and leaves it barren and the world feels empty and lifeless as a result.

The trainer battles lack encounter music. The background music from the area you are in keeps playing whenever you enter a battle. However, from what I have heard, the dev is working on adding encounter music.

One of the first things you will also notice is how poorly the game runs. At least for me, the game has issues with keeping a stable framerate. On top of that the controls are clunky and jerky. They lack the smoothness the controls the main games have and feels off. To any person who has played a lot of Pokémon games, the games control and feel will very likely be off putting.

The menus look gorgeous, and are pleasant on the eyes. The colours don’t clash and the design doesn’t shove so much information in your face that you end up with information overload. 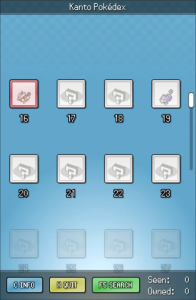 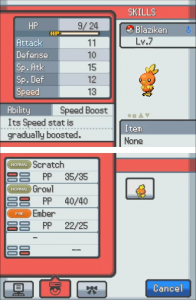 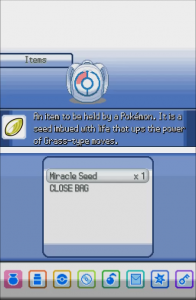 The general spritework looks great. Much of it is lifted from Pokémon HeartGold and SoulSilver, but it works well and I can’t critique it that much.

However the “dual” screen setup hurts the game more than it helps. You’ll notice this in some of the cutscenes – you can sometimes see the NPC waiting for you off-screen. The first cutscene with Oak when you attempt to walk into tall grass has him pop out of nowhere to stop you, and when he walks off he disappears into thin air. This just makes it seem like the game was made with one screen, but during the last minute they just decided to change it to this “dual” screen setup without adapting anything to it.

The majority of the battles you will be in will have Pokémon which are level 1, and their levels barely increase. Even when you face the 3rd badge you aren’t even up against Pokémon above level 10.

To top of the Trainers and wild encounters, some of them are not fit for the level you meet them at. You can find a level 1 Deoxys right after Pewter City and many of the trainers, whilst still having Pokémon that don’t cross level 10, have fully evolved Pokémon, and I have personally always hated those “illegal” Pokémon.

The gyms are lifeless. They are now a singular room with only the Gym leader. Gone is the guy that gives you advice and believes in you at the entrance, as well the statues that tells you what trainers have beaten the leader.

The marts have five shop options and I question the need for so many of them. Other than the five vendors the Marts’ are empty, and so are the Pokémon Centers. There are no NPCs other than the staff which only contributes to the overall empty, void world.

The one custom map that was added, which was not a part of Kanto before, is in Mt. Moon, but it’s big and empty with so little in it, which doesn’t justify it being here. Some of the buildings looks like they are copy and pasted, and some of the changes to the layout are questionable. It is a shame given I liked how the Underground Path looked, but the weird traffic cones that appears to be there just to inconvenience you makes me question the map design in places.

Interface and Other Design

The sound effects do not sound like they belong in a Pokémon game. Some of the locations don’t make sense, like your own house which for some reason, despite being a small two storey house, has two sets of stairs to the same floor. When you beat a trainer their sprite appears in the wrong location. The move animations do not fit the style of Pokémon at all, with the only move I felt matched the feel of Pokémon games was Absorb.

The battle screen as a result looks empty and the space available simply isn’t used properly. The moves for your Pokémon and the menu options are bundled up around your Pokémon, but it could easily have been turned into something like we had in the DS titles. Heck, we could have had Pokétch for when we are in the overworld. It is just empty white space that hurts the game more than it allows for creative expression.

Overall Pokémon Green Remix as it is right now is not very good. It lacks the charm and many of the elements to make it feel like a Pokémon title. Many small flaws and some glaring ones drag it down and heavily outweigh the good that is there.

The game is listed as complete when I played it, but it lacks polish and doesn’t feel like a finished product yet. My main issues with the game also stems in the fact that I am simply not a big fan of Generation I, and as a result I have to accept that the game is not meant for me.

For those that love Generation I, I can see them enjoying the title once some of the bugs have been fixed and the game is more polished.

Edited by bobandbill, Jake, and Soccersam.

Kevin started playing Pokémon in 2002. Kevin also studied game design in college and now he is ready to share his passion with what he has learnt.