The next Nintendo Switch titles Pokémon Sword and Shield were announced today, alongside the three Starter Pokémon. Scorbunny, Grookey and Sobble are the representatives for the region of Galar. Let’s explore these new generation eight critters and consider what they may be based on, and what possible paths or themes we have for their evolutions! Of course, a heavy amount of speculation is ahead. 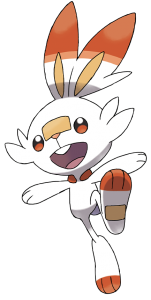 The Fire-type starter is based on a rabbit – or, alternatively, a hare (part of the same family as a rabbit, albeit just a different species).  It isn’t yet clear if there is a particular species we can settle on. The name seems obvious too: scor[ch] + bunny. Incidentally, it can fit in the Chinese zodiac pattern for Fire-type Starter Pokémon, given a rabbit is one of those twelve zodiac creatures.

What could Scorbunny evolve into? Well, there are two clear features that stick out. One: the trailer highlighted its feet. Flames were left on the grass after it tapped its feet upon the ground. Second: on its forehead, as well as the soles of its feet, are rectangle shapes that possibly resemble bandaids or bandages. Combine the two, and you have grounds to theorise there is a rugby theme here (or, perhaps, a football – soccer – theme). And what better region to feature a rugby-themed starter than one based on the United Kingdom (UK)?

That could give a dual meaning to its name too – scorch, or perhaps score. Its Japanese name meanwhile of HIbani includes a potential combination of the word for spark, which in combination with its energetic description suggest at a Electric typing down the line. Time will tell on that however. 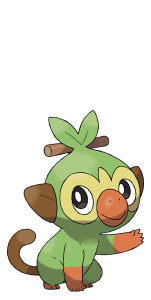 Grookey appears to be based on a squirrel monkey. The rounder head shape and triangular ears on the side of its head match fairly well, alongside its size. It’s also a natural choice for the Grass typing, given the affinity for trees monkeys have. It is clear however that it is not based on an animal native to the UK (as with Sobble), so any theme that may relate to the nation (if any) would have to be separate from the animal. Its name may be a combination of gr[ass] and [mon]key… but there’s another possibility.

A key point in the trailer was its use of a stick, which it tapped on a stone. It carries it in its hair. It looks suspiciously like a baton, and it did tap it rather rhythmically, as if keeping a beat – like a drumstick. Could it have a musical theme in evolutions? That could fit into its name as well: groo[ve] and [mon]key. Adding to this, its French name is Ouietempo – a combination of ouistiti (the french word for marmoset, a species of monkey) and tempo. As a bonus, ouie is also french for hearing.

Another way to consider it is that it uses the stick as a weapon. If we consider popular sports in the UK, we can only really arrive at cricket – however, the musical parallels are just too convincing at this stage. 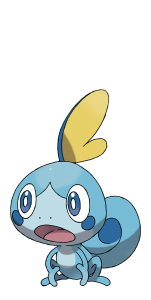 The easy conclusion is that Sobble is based on a chameleon. A particular example is the panther chameleon. The tail is rolled up like one, it has a growth on its head, and they are both lizards. Furthermore, we saw Sobble camouflage itself in the water – much like how chamelons can do the same.

Its name may be a combination of so[b] and [bu]bble. Sobbing is derived from its dex entry and behaviour in the trailer – a timid creature which runs away from the noise Grookey was making. Sobbing is something you would expect a timid creature to do! It is not yet apparent what evolution theme it may have. Perhaps it overcomes its timid nature and becomes a brave Pokémon? For fun we could also consider it becoming something along the lines of the Loch Ness monster – a mythical water creature which has hidden itself from human sight.

What do you think of the Starter Pokémon of generation eight? Have you already settled on one to start with, or are you waiting to see what their evolutions look like?

Thanks to Ash, Erik, Fletch, juliorain, Red PM Trainer and Rivvon for discussion for the article!
Edited by Aldo, Jake and Sheep.