Hello there, reader! You’ve stumbled upon what should probably be an epic failure of a deck. In this probably-a-series-but-not-quite-yet, I will come up with or take suggestions for a totally random rogue (non-meta) deck idea and attempt to build and test it on the Versus ladder of the Pokémon Trading Card Game Online.

Will these decks actually work? Not likely. Will I try them anyway? Yes.

Join me as we venture into the depths of the card pool and attempt to find something fun to try!

Today’s subject is a new variant of my favorite deck archetype ever. Decks built around Eelektrik (NVI 40) gained a very small surge of popularity in the mid-2012 era because one of the top decks of that time, Durant, literally did your entire set up for you. Also it is the only type of deck I’ve come anywhere close to winning a real tournament with. With Guardians Rising’s release earlier this month (read more about the set here), we gained a wonderful new friend for Eelektrik in Vikavolt GX. And so, VikaEels GX was born.

Use Vikavolt GX’s Super Zap Cannon to do tons of damage. This requires discarding Energy, so Eelektrik’s Dynamotor  Ability is used to help recycle said Energy.

Protip: You can import my list directly into the TCGO to see what of it you have and don’t have. Go to this pastebin and copy the text. Then open the TCGO and navigate to the Deck Manager. Click “New Deck” followed by “Import”. It won’t just give you the cards, but if you happen to have them you can use my exact list! Because some cards (especially Trainers) have multiple prints, check to see if you have a different version of the same card. 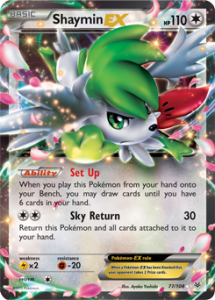 Shaymin-EX is a staple in every deck ever due to the sheer power of its Set Up Ability. This allows you to refresh your hand to six cards when you play Shay to the Bench. Getting through more of your deck is encouraged in this game, so Shaymin gets a spot. I Initially had two in this list, but then realized that Tapu Lele fits this deck better anyway.

I maintain that the Regular Art Shaymin-EX (pictured) is the coolest, although it is probably worth noting that a Full Art print also exists. 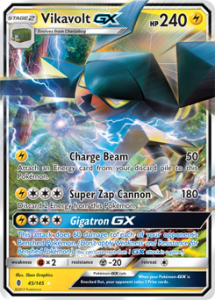 Vikavolt GX is the one who is going to be doing most of the hard work in this deck. I’ve already written about this card plenty in my totally unbiased review of Guardians Rising, so I don’t feel the need to explain it again. What you need to know is it does 180 damage for four Energy, but you have to discard two Energy to use it. 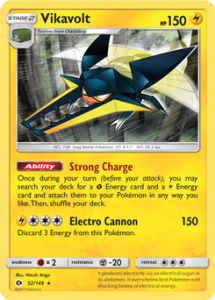 The SUM Vikavolt (referred to as “Baby Vikavolt” for the remainder of this article) is a more odd selection. In truth, it is there because I don’t have a fourth GX or the pair of Tapu Koko GX I wanted for this deck. However, its Ability also is the only way in this deck to directly search out Energy, and as an added bonus it gives me an extra attach each turn.

Before you freak out that I only included one Charjabug, keep in mind that I also have four Rare Candy to ignore Charjabug entirely. This is almost sad, because Charjabug is adorable. 🙁 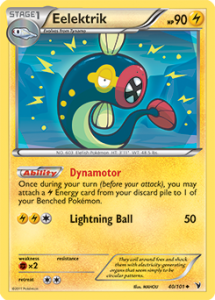 Eelektrik is my second favorite Pokémon card after Lanturn Prime, because Dynamotor is just such a good ability. It lets you drag up a Lightning Energy from the Discard Pile and attach it to one of your Benched Pokémon. This can be stacked with other Dynamotor Abilities (so you can use as many as you have Eelektrik each turn), and does not consume your standard Energy attach for the turn. For those keeping score at home, two Eels, Baby Vikavolt, and your standard attach combines to FOUR Energy per turn. 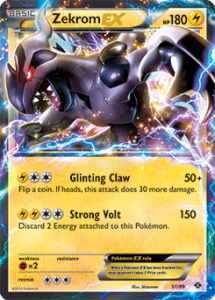 Vikavolt GX lite. It’s a basic with 60 less HP than Vikavolt GX and an identical attack that does 30 less damage. A natural fit for the deck. There are a total of four different prints of this card (NXD 51, NXD 91 [FA], LTR 52, PR-BLW BW38). Any of them work, they all do the same thing anyway. 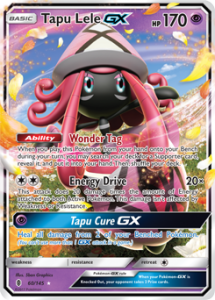 This card is overpowered. Playing it to the Bench nets you a Supporter of choice from your deck, making it easy to pick up that Lillie on your first turn for massive draw or grab Skyla which can then be used to summon a Rare Candy or Float Stone. The possibilities are as numerous as the number of people who are still convinced the Pokémon Stars leaks were real. Tapu Lele also functions as an excellent place to store excess Energy, as it can use Energy Drive to do 20 damage times the number of Energy attached to both active Pokémon. Both of these aspects will work very nicely in this deck. Again, three different prints of this card (All from GRI), any of them do the job. 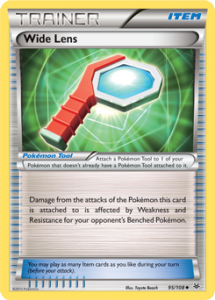 The only super outlandish Trainer option in this deck, Wide Lens allows you to hit enemy Benched Pokémon for their weakness. This is literally just an anti-Shaymin tech, as Vikavolt GX’s GX Attack can OHKO multiple benched Shaymin EX with a Wide Lens. If the opponent left two Shaymin there (not an uncommon sight), that’s four Prizes for minimal effort. #Worth.

Note: At the time of publication, Wide Lens currently does not function correctly on the TCGO when used with attacks that hit the entire bench like Gigatron-GX. This is a known issue and TPCi is working to fix it.

To test the new deck, I played twenty games with it on the ladder. Here were the results:

Protip: Don’t know what one of the cards listed does? Click on the first place it it mentioned to be magically warped to the card’s page on the official TCG Database. If it doesn’t, I probably mentioned it somewhere above.

Game 1 – Vs Fighting Box (ft. Machamp EX, Lucario EX, Carbink BREAK)
It’s a Fighting deck, how well do you think it went? Discarded too many Supporters with Ultra Balls early, and got screwed over later for it. 0-1

Game 2 – Vs Camerupt EX?
Turn two Vikavolt GX with four Energy on it. This is what the deck is SUPPOSED to do! Sadly, my opponent conceded before I even got to blow him up once. 1-1

Game 3 – Vs Delphox?
Turn two Vikavolt GX, but not the fourth Energy. However, Charge Beam let me threaten a KO on the active Miltank, prompting my opponent to drop three 60HP basics. Gigatron GX happened, and the opponent conceded. 2-1

Game 4 – Vs Serperior w/ Mew EX
Opponent doesn’t get Forest of Giant Plants out on his first or second turn. I get Vikavolt (non-GX) out, and KO his Mew EX. Vikavolt GX is ready by the next turn, so my opponent again concedes. 3-1

Game 5- Vs Kitchen Sink? (Mew EX, Pidgeot EX, Fairies)
I honestly don’t know what was happening with his deck. Whatever the case, it got to the point where I was attaching four Energy a turn, which is usually GG. I was planning on swapping out the Zekroms for more Trainers, but Zek took four out of six prizes, so I’m leaving him there for now. 4-1

Game 6 – Vs Solgaleo GX (I assume)
Tapu Lele start, my only turn one action was a DCE attach. Luckily for me, my opponent started with a lone Cosmog start and the turn two attack from Lele was enough for the win. 5-1

Game 7 – Vs Bronzong/Solgaleo GX/Genesect EX
My first double mulligan actually turned into FOUR mulligans, despite my eleven Basics. #Probability. Luckily I went first and pushed N, so the mulls didn’t matter. Solgaleo KOed a Zekrom EX that had sacrificed itself for the cause on turn 3, but by that point I had an Eel and both types of Vikavolt. Dropping two extra Cosmog to give me 2 free prizes with Gigatron GX was a mistake by my opponent, but if he hadn’t I would have just blown up his EXes anyway. 6-1

Game 8 – Vs Fight Alone
This matchup should be really hard for Vikavolt due to the fact that I want my bench filled as much as possible, and Lucario punishes that hard. Luckily, I was able to stack four Energy onto a Grubbin, and I topdecked the Vikavolt GX on the last possible turn to KO his sole Lucario. 7-1

Game 9 – Vs TrevPlume
He got up Plume turn one, preventing me from doing anything. I conceded. 7-2

Game 10 – Vs Archie’s Greninja w/ Miltank
Water Shuriken has the nasty side effect of preventing me from playing Tynamo. RIP. 7-3

Gam 11 – Vs Volcanion/Delphox
Delphox BREAK is powerful and Vikavolt didn’t come out until much later than I would have liked. When Vika did show up, the ability to attach three Energy a turn (two Eels and my normal attach) was able to surprise his lone Delphox BREAK (Zekky had just KOed a Volcanion) with 180 damage from something that had been a two-Energy Grubbin when he ended his last turn. 8-3

Game 12 – Vs Groudon EX
After awful starts for both players, the game quickly turns to Draw-Passing for both players. Eventually I just stack nine Energy on a Tapu Lele GX and win the game. 9-3

Game 14 – Vs Bronzong/Solgaleo GX/Genesect EX
This deck just has a little too much firepower for Bronzong/Solgaleo to keep up with, although baby Vikavolt and its Steel resistance played a huge role in securing that win. 11-3

Game 15 – Vs Showoff Decidueye Hammers
This guy was either a hacker or a spoiled rich kid who spent $2000 on codes, as his deck was almost all SR cards. Luckily for me, this meant he didn’t want to run many Grass Energy because he obviously wanted to use only the golden ones. Justice was served appropriately. 12-3

Game 16 – Vs Waterbox
I’ll save myself the trouble of writing and just post a screenshot from the game. 13-3

Game 18 – Vs Lapras GX
Ignoring the whole “this deck counters me” thought, I also prized two DCE, two Eelektric, Baby Vikavolt and the Choice Band that would have saved the game if I had it like turn 3. 14-4

Game 19 – Vs Night March
Opponent was doing pretty well, than I used Lysandre to send the active Mew to the bench and Gigatron GX to get three KOes. It went downhill from there. 15-4

Game 20 – Vs Vikavolt
And for the sake of irony, the final match is a pseudo-mirror (opponent had no Eels). I get the worst start possible, holding a Sycamore for the first few turns because I also had all three Vikavolt GXes (and Charjabug) and no Grubbin or Candy. However, I eventually draw into a Grubbin after sacrificing a Zekky and an Eel, and am able to take over the game from there.

Viability: 7.5/10 (generally good, but hindered by bad matchups against some of the best decks in the format)

Ease of use: 7.5/10 (some complicated mechanics that need to be practiced before they work properly)

Budget: 7/10 (Tapu Lele and Shaymin are expensive, Vikavolt isn’t bad but still up there)

Personal Enjoyment (the only score that actually matters): 9.5/10

Should you try Vikavolt/Eels?: Yes.

In conclusion, Eelektrik is still as fun as it was five years ago, and Vikavolt GX is quite effective as a partner for it. The deck is hilarious to play as well, especially when it works.

That’s all the content for this instance of “Rogue Deck Test”. Any questions, comments, complaints, and most importantly suggestions for new rogue decks to try can go in the comments below. Thanks for reading, and good luck in your Trading Card Game adventures!