Welcome to ddrox13’s Deck Analyses! Know the TCG and want to start playing in tournaments? Want to be able to actually WIN some matches? Then this series is right for you. Each edition, I will discuss a new top-tier tournament deck, why it works, how to play it, and what fun additions you can make to give the deck some personal flare.

For this article, I will discuss a deck archetype based loosely around the Grass type. This deck, or something similar, saw some limelight as one of the top decks in the 2010 format, and recently was used by the Senior World Champion, Jesper Erikson. Ladies and gentlemen, it is time to discuss the Yanmega Deck Archetype!

DISCLAIMER: I will almost always be using the 2-3 letter abbreviations for set names when describing cards. If you can’t guess what set it is, look it up. Any set name followed by etc. means more than one print of the exact same card has been released and any of said prints is legal. Oh, and all things shown here are my opinions based on things I know to be true. Lastly, I will be assuming that you know generally how the TCG works. If you don’t, check out this TCG starter guide first.

How to Play the Pokémon TCG in 2500 Words or Less

Cost: Medium – Not bad except for the Shaymin EX

How to Yanmega in 45 Words or Less

Use Forest Of Giant Plants and your choice of Trainers to get up Yanmega or its BREAK ASAP (preferably turn 1 or 2) and start smashing away for FREE, making sure to keep your hand at exactly four cards at the end of your turn.

Here is a list of the basic things you almost must have in a Yanmega deck. I will explain what each card does in a later section, but keep this list in your head.

This is an unusually rough decklist skeleton, even for me, but Yanmega 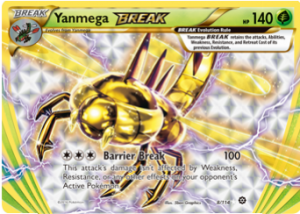 works well into a huge number of strategies, so there are many options. The first thing to note here is the total Energy in the Skeleton. That’s right, it’s ZERO. You may end up wanting to run some depending on if you choose to run another attacker, but Yanmega is a strong, independent dragonfly and doesn’t want or need any of your Energy (or your sass) due to its broken as heck Ability.

Beyond that, it is mostly standard procedure. Revitalizer and Forest of Giant Plants are important for any Grass deck. Shaymin EX, the Ultras, Sycamore and the VS Seekers are obligated in nearly any deck. Bursting Balloons scare off scary EXes (or anything else that can take 100-120 damage to the face and live). Judge is an unusual choice for hand refresh, but it really is more useful for reducing/increasing your hand size to four, which is key to this deck.

4-4-3 Yanmega BREAK (STS 6,7,8): Your primary attacker (and in some cases, only attacker). It is a Grass-type Stage 1 Pokémon that evolves from Yanma, with 110 HP, a Weakness to Lightning, and a Resistance to Fighting.

Yanmega’s standard attack, Assault Boom, isn’t noteworthy at 50 damage for three Colorless energy. It becomes relevant when the opponent has a Tool attached to their Pokémon, as the base damage increases to 120, which is more than Yanmega BREAK’s Assault Blast. Said BREAK increases Yanmega’s health by 30 and its Assault Blast attack does 100 flat damage that ignores Weakness and Resistance for the same three Colorless.

What makes this card amazing is Yanmega’s Ability, Sonic Vision. This Ability causes any of Yanmega’s attacks to cost NO ENERGY, assuming you have exactly 4 cards in your hand. This is the crux of how the deck works. It strikes fast and hard, and doesn’t need to clog up the search cards with tons of Energy. Get these out quickly and keep them out to try for a quick victory. However, Yanmega’s damage cap is 120, 10 short of Xerneas and Yveltal and not nearly enough to KO an EX, although most do fall in two strikes. You can shrink this line to a 4-3-3 (which is to say four Yanma and three each of Yanmega and its BREAK), 3-3-3, or 3-3-2, or increase it to a 4-4-4 but I think that 4-4-3 is ideal.

2+ Shaymin EX (ROS 77 [RA], ROS 106 [FA]): Shaymin EX is a 110 HP colorless EX with a weakness to Lightning. It has an attack that doesn’t matter, and an Ability that does. Its Set Up Ability lets you draw until you have six cards in your hand when you play it to the Bench. This is effectively an extra Supporter, which is absurdly powerful for an Ability.

Just to clear this up, I will not mention the trainers that are in literally every competitive deck. This includes Professor Sycamore, N, Ultra Ball, and more. Just trust me that those are really good.

Judge (BRT 143, etc.) – Judge is like N in that it resets both your hand AND you opponent’s team, but instead of a variable the hand size of both parties is four. Conveniently, this is ALSO the number of cards Yanmega needs for its Ability to activate. This allows you to have a definitive way to end the turn at four cards no matter what your hand size was at the beginning.

Revitalizer (GEN 70) – Grab any two Grass Pokémon from your discard and add them to your hand. Gives a Yanmega another chance at life, which is super important when you have four Yanmega and they have to take six Prizes to win.

Bursting Balloon (BP 97) – Death to EXes. It’s a tool that says that during the turn after it is played, if that Pokémon is damaged by an attack the attacker takes 60 damage. Lets you hit some good numbers on Exes.

Forest of Giant Plants (AO 73) – This is what makes the deck actually work. It allows you to evolve Grass Pokémon the turn they are played or your first turn, meaning you can get a Yanmega up as soon as turn one.

This deck relies on speed. Your objective is to get Yanmega up and swinging as soon as possible using Forest of Giant Plants. 70% of the rest of the deck is designed to assist with this.

The big kink here is that you need to end your turn with four cards in hand. If you have a Judge, feel free to use any non-supporter resources to get out those Yanmegas and Judge to end your turn. Otherwise, be careful to conserve cards if you are running low. Don’t be afraid to N or Sycamore though, you can usually play those cards afterwards

Once you are set up, not much else happens. Continue ending your turn with four cards and swinging for 100 base. Just remember to use Assault Boom if the enemy has a Tool equipped.

Things that disable Abilities – Garbodor, Hex Maniac, take your pick. You cannot do ANYTHING when you are locked out of using Abilities. Garbodor’s Garbotoxin shuts off Abilities as long as he has a Tool equipped, which means Yanmega literally can’t attack and you outright lose the game. Do NOT let a Garbodor get a Tool. Hex Maniac only lasts one turn, but it is still a thing.

Glaceon EX – Similar situation. Once Glaceon EX (FCO 20, FCO 116) starts attacking, it prevents evolved Pokémon like Yanmega from attacking. The difference is that it is only Glaceon that can’t be attacked, so a Lysandre will get around it.

Item Lock – Items are a key component of this deck for so many reasons, most notably that you often want to play them to reduce hand size. Thus, when you are prevented from playing items by something like Vileplume, you often get stuck with a large number of useless cards in hand.

Here are some other cards to consider playing in Yanmega decks:

Ariados (AO 6) – Ariados is amazing in any Grass deck. Its Ability allows you to poison both player’s Active Pokémon, but ignores Grass types. This often gives Yanmega that little extra damage it needs to KO some top tier Pokémon.

Vespiquen (AO 10) + 4 DCE – Vespiquen is a decent option for a secondary attacker, as he was used by Jesper Erikson in his Worlds run. Its attack does 30 damage plus 10 more for each Pokémon in the Discard pile. It is a good late-game attacker, but it is severely hindered by the loss of Battle Compressor with the last rotation.

Unown (AO 30)– Ancient Origins is a fabulous set. Unown has an attack that doesn’t matter, and an ability that allows a benched one to be discarded to draw a card. I find this to be excellent for a deck that needs to manipulate hand size, as playing one allows you to reduce your hand and discarding one lets you increase it. It also synergizes nicely with the Vespiquen above.

Lugia EX (AO 68) + 4 DCE – More AO? This is an odd pick, but it is one of the few Pokémon left who can reliably do damage for a Double Colorless. It does 20 damage times the amount of energy attached to both Active Pokémon. Not particularly cool, but still does what it needs to.

Galvantula (STS 42) – A different approach is Galvantula. For one energy, Galv can attack two benched Pokémon, as well as applying weakness for those weak to Grass or Lightning (looking at you, Greninja). A Lightning energy also lets him prevent the opponent from retreating. A nice utility card to play around with.

Raticate BREAK (BP 89) – A really cheesy card to play around with, which works in combination with Ariados. Its Anitbodies Ability prevents it from being poisoned, and the BREAK’s Hyper Fang lowers the enemy HP to 10. It is not a great idea, but you know, it’s something…

Ninja Boy (STS 103) – This isn’t nearly as effective here as it is in a Toolbox deck, but it can still allow you to put a Shaymin EX back in your deck and get out a Yanma or whatever crazy Basic you decided to play.

I am super excited for this format, and this deck is one of my favorites. I’ve mentioned how amazing I feel this deck to be. However, as always, my build is not the only way to make a Yanmega deck, so try some things out! If you come up with some genius idea or have any questions, put them in the comments!

Edited by bobandbill and Nick Wilde.