Fancy some brain-teasers? We’ve compiled the puzzles from the PokéCommunity Get-Together 2021, an annual event that takes place in our forums where users gather around to participate in some fun events hosted by the community! These range from finding impostors among Leavanny to fitting ice blocks together. Take your time to think on each puzzle, then check the next page for their solutions. You can try solving all of them in one go, or keep tabs with both pages. Sounds simple, right? Without further ado, here are the puzzles! 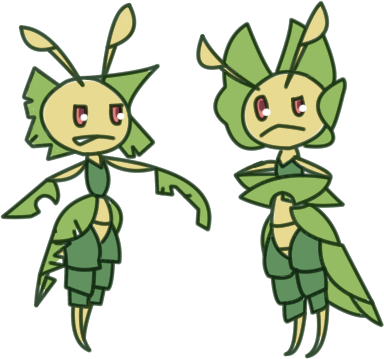 Furfrou from the forest always go to Leavanny to get their hair trimmed. But, a sneaky Ditto decided to use Transform on Leavanny plotting to mess up everyone’s cuts!
Leavanny is the only one who’s good at trimming and tailoring for others in the forest, so the only way to find out who’s the real one is by having Leavanny do what it’s good at!
Looking at the final results, which of them is the real Leavanny? Left or right?

One day, Clefable noticed a strange thing while strolling around at night…

It has four shadows when there should be only one!
What!? What’s going on!?
To make things worse, the shadows “talk” among themselves, making Clefable unable to sleep. Poor Clefable…
There’s only one solution to this. Find Clefable’s real shadow to dispel the fakes!
Only one of them is real… 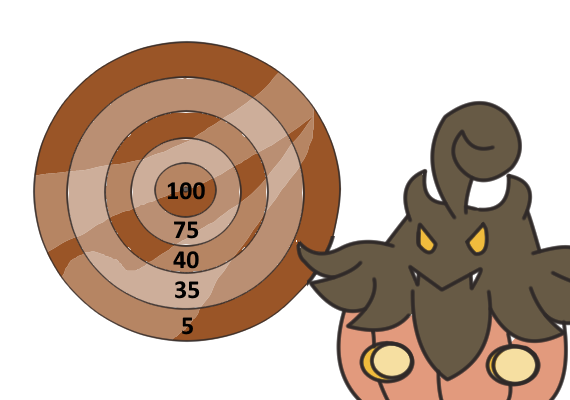 Little Pumpkaboo wants to help catch the bad Pokémon, so it’s doing some Target Practice!
A target divided into sections worth 5, 35, 40, 75, and 100 points was carved on a tree. Pumpkaboo used Bullet Seed and shot 5 times, scoring 100 points.
How many times did it manage to shoot each point section?

Litwick’s been lonely inside an abandoned mansion, so it lit 11 real candles to try and fill the hole in its heart. 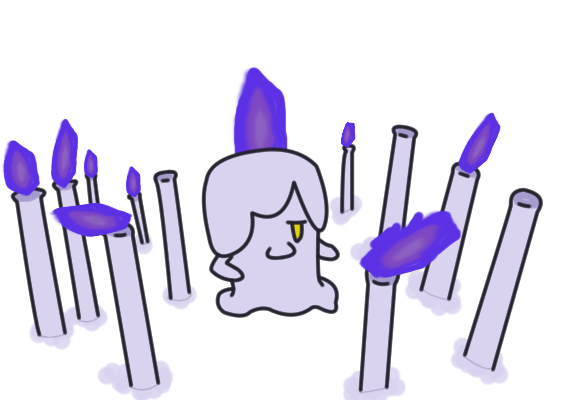 A strong breeze blew in through an open window and extinguishes two of them. Once Litwick took notice of that, one more candle had gone out thanks to the wind too. To save its remaining buddies, Litwick shut the window. The remaining candles hadn’t to worry about the wind. Satisfied, Litwick fell asleep for a few hours.
Now that the wind can’t extinguish any more candles, how many candles does Litwick have when it wakes up?
Litwick itself doesn’t count.

Thankfully you’re around to help. There’s three holes ahead, and you know Drilbur dug one of them to get away.
Between A, B and C, which of the holes should Diglett dive in to find Drilbur and recover its berries?

An ill-intentioned Kecleon’s been hitting everyone and then turning invisible, making it really hard to teach it a lesson.
But it made a mistake. 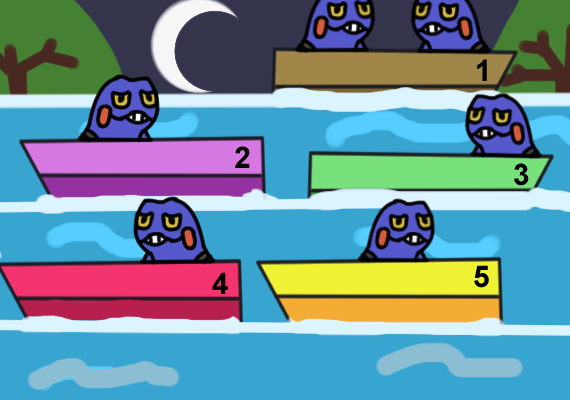 Its only escape route this time was going onto one of those boats. If you can find which one it’s in, it may just stop annoying the others.
Which of the boats has Kecleon on it? 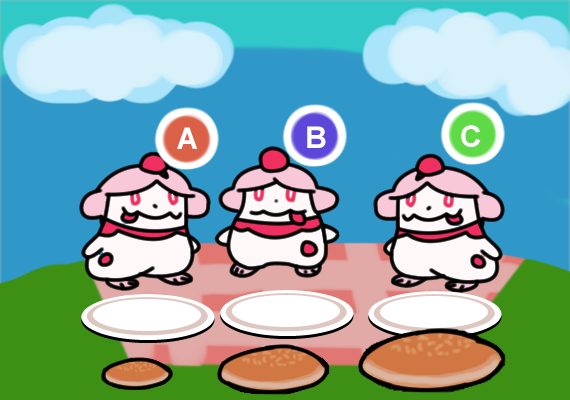 You found a decisive clue that pointed you to the right track, but the mischievous Pokémon already ran away! 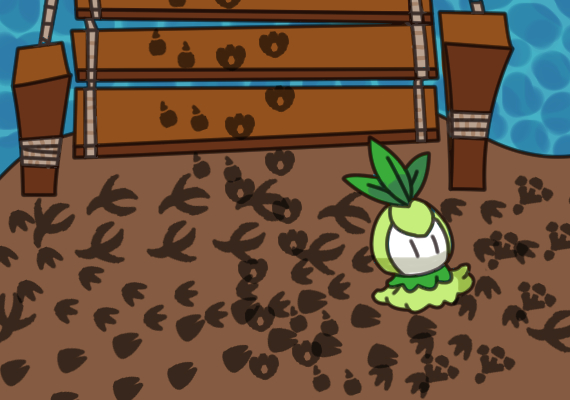 Pursuing them led you to a bridge at the side of a river. The ground’s all muddy, so you can see the footprints left by all Pokémon who have been here recently.
None of them seem to have the same pair of footprints.
It’s clear only the mischievous Pokémon would’ve left the prints here recently in their getaway.
So, looking at all these prints, can you tell the number of Pokémon that crossed the bridge? 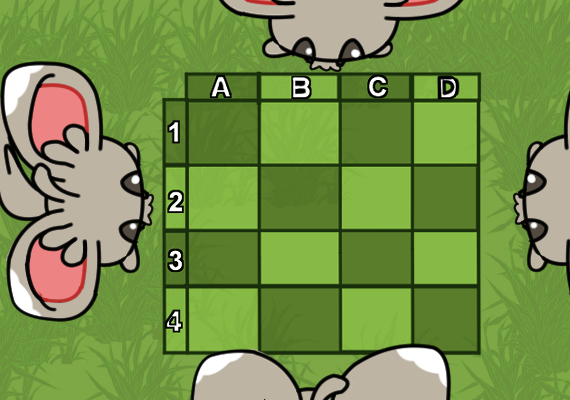 Six Pangoro, numbered 1 to 6, walk in a circle around the forest. 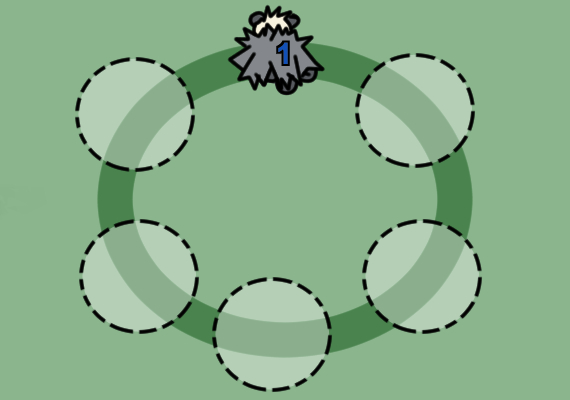 Each of these Pangoro will fight the one next to them to prove their strength if their number is directly below or above them.
Also, Pangoro 3 and 5 had a dispute earlier over some Sitrus Berries, so they absolutely cannot walk next to each other.
The strongest Pangoro (Pangoro 1) walks at the front, while the others fill in the other positions in the circle.
Can you fit in the Pangoro in positions where no one hurts anyone? 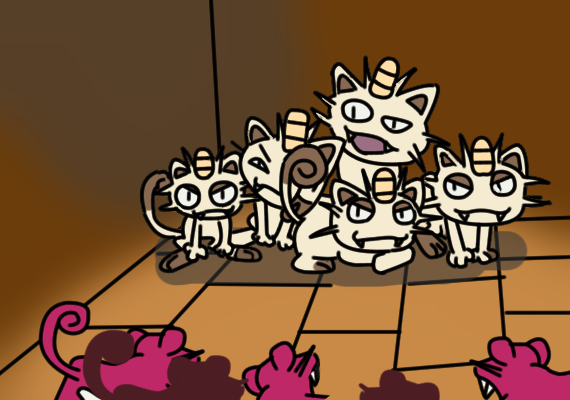 Meowth and Rattata have some ongoing rivalry, but Meowth always have the upper hand.
Five Meowth can catch five Rattata in five minutes.
With that in mind, how many Meowth does it take to catch 100 Rattata in 100 minutes?

One day, four Rapidash took part in a racing competition. First they held races of two, then the winners raced against each other, while the losers battled for third. 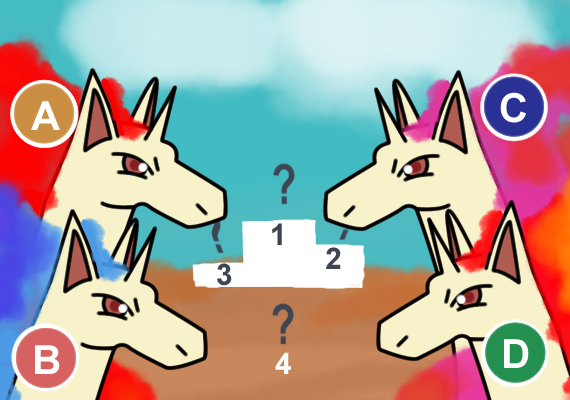 While the Slurpuff A and B were distracted arguing about their Poffins, their Big Poffin was eaten! 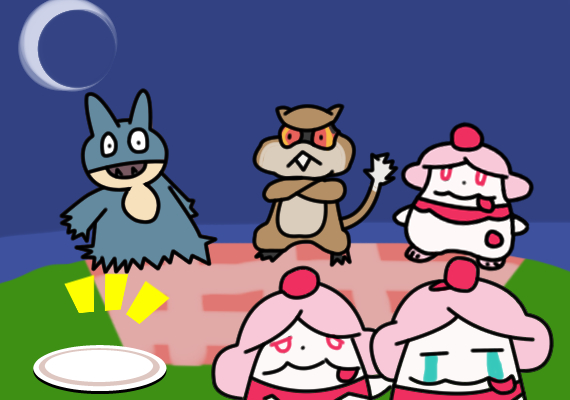 Both Slurpuff are too sad to think right now, so it’s up to you to find who’s the sneaky Pokémon to stop their mischievousness!
You approached the three Pokémon near the scene of the crime. Each of them said:
Munchlax: “Me? I ate it. Soo delicious!”
Patrat: “I saw Munchlax eat that Poffin!”
Slurpuff C: “Patrat and I didn’t eat the Poffin.”
One of these Pokémon is lying to you, but which one is it?

Oh no! Klefki dropped one of its precious keys into a pit!
Klefki would retrieve it, but it’s frightened by the Spinarak coming up the poles. Since you think the key is important to Klefki, you decide to help it! 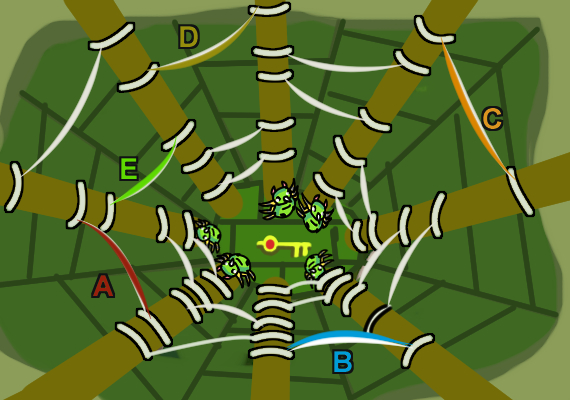 The Spinarak will move to a string any chance they get while still moving upwards.
They somehow manage to never bump into each other, but if they bump into you, you’ll be in trouble!
Which of the marked spots is the only safe place to descend to retrieve the key while avoiding the Spinarak as they climb out?

Someone really mischievous has been messing up the forest’s ground!
Wherever they walked would be messy as if an earthquake had just happened, so no one could walk there, including itself.
It’s about time to stop them before they cause any more troubles, and in order to do that, you need to figure out its exact path. 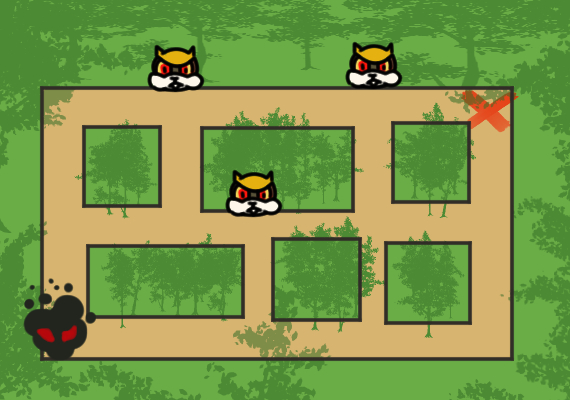 Three Patrat were watching it in different spots and managed to see it. You can get a pretty good clue of its path just from their accounts mentioning the directions it went below: 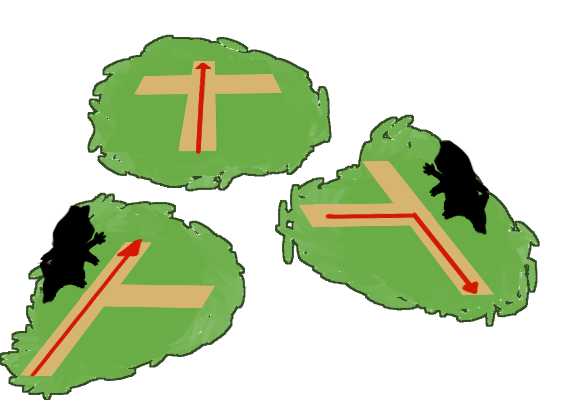 Knowing it started at the bottom left and ended up at top right, can you trace the path the mysterious mischievous Pokémon took? 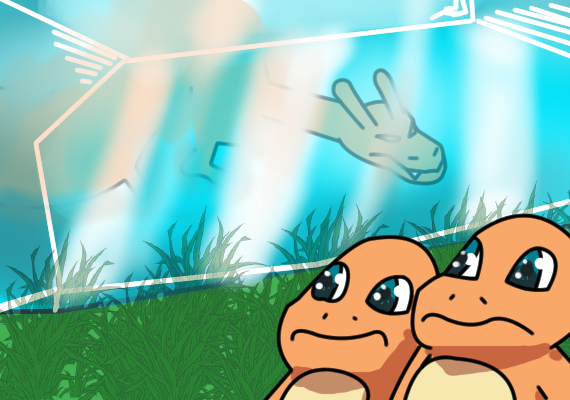 Charizard takes care of the Charmander in the forest, so they’re really trying to find a way to defrost it before it gets worse.
One Charmander can use its tail’s hot flame to melt 40g of ice each second.
With Charizard frozen in 20000 g of ice, what’s the minimum number of Charmander that are necessary to defrost it?

Ever since many Pokémon became mischievous, Komala has been having a hard time sleeping…
It then had the idea of counting Mareep! 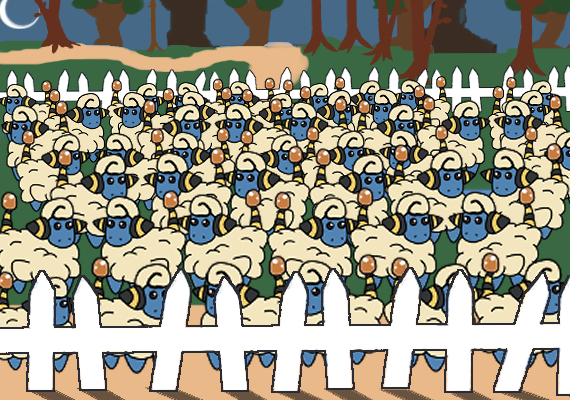 You found the whereabouts of the mischievous shadow!
You’re right near the entrance to the lake all clues led you to.
Just like before, this shadow destroys anywhere it walks on, so you need to be careful to proceed harmless. 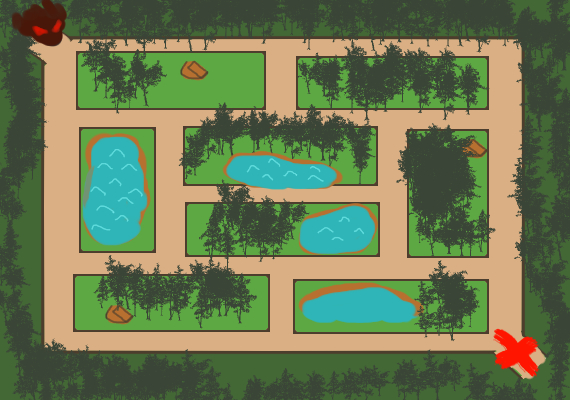 The shadow took the longest route from top left to bottom right.
Remembering that it cannot walk anywhere it has already walked, what’s the route that the shadow took?

Pumpkaboo and Clefable want to help too! 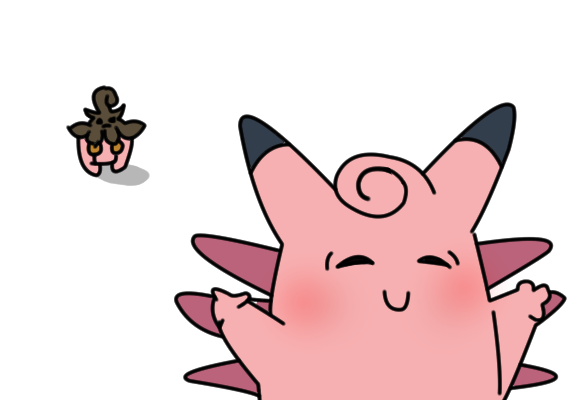 Each of Smeargle’s paints represent something. 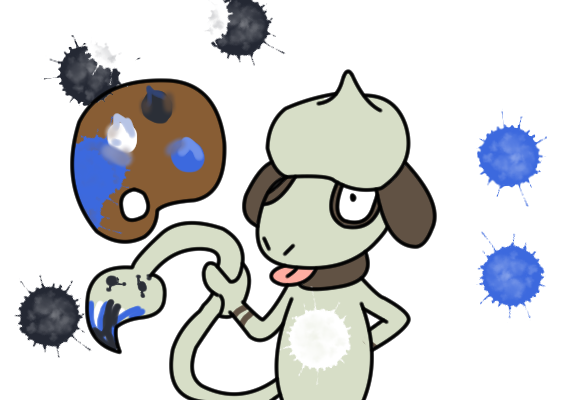 One of these colors is always present every day. You can see Black, Blue and White.
Apparently that color can be seen outside.
Which color is it?

As you arrive at the lake, you notice the ancient door supposed to guard it. 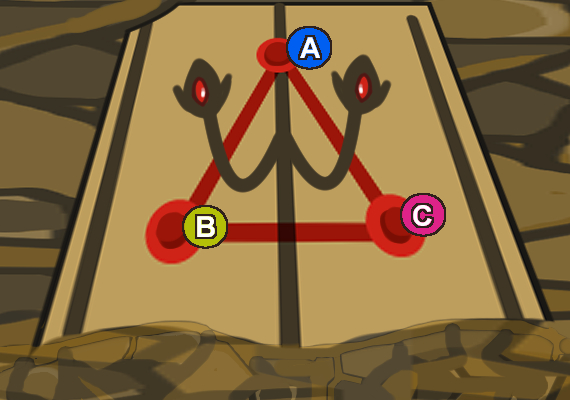 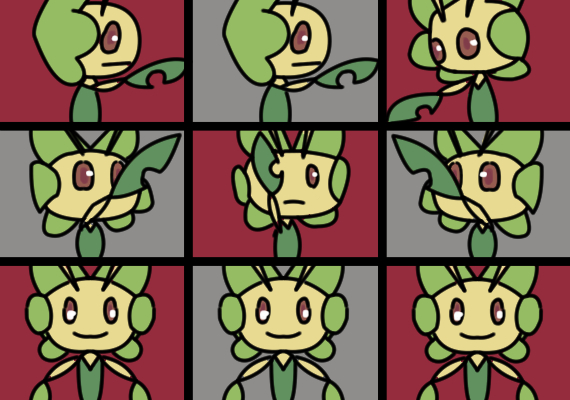 But this time, it’s not alone. You can see nine “Leavanny”. All of them are Ditto, except for the two real Leavanny.
In a short moment after they were done transforming, you caught a crucial glimpse that tells you who’s real and who’s not!
Each of the “Leavanny” is pointing each other to ascertain who’s a friend and who’s not.
The Ditto, who know their friends, are pointing to the real Leavanny. If there’s not a Leavanny adjacent to them, they don’t point anyone.
The Leavanny, unaware of who’s who, will point at anyone, regardless of whether they’re a Leavanny or a Ditto.
Can you figure out which two Leavanny are the real ones?

Some Gengar want to play with you! 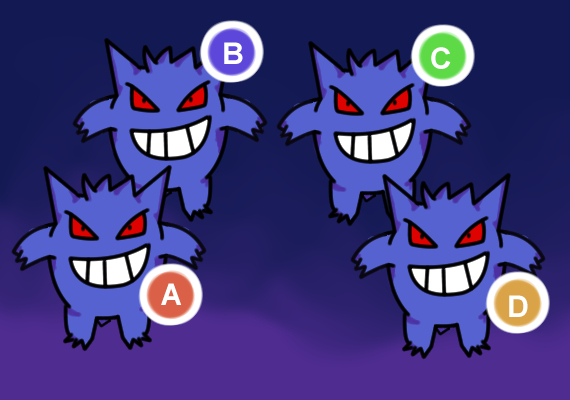 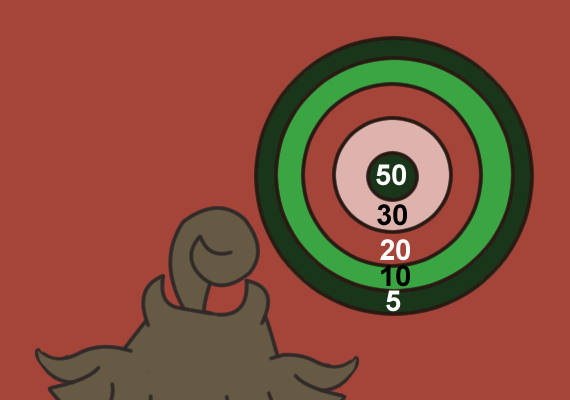 This is a bit like how Pumpkaboo’s imagining it.
Pumpkaboo shot Bullet Seed three times, and all of them hit different sections.
What’s the lowest possible score for Pumpkaboo?

You found the mischievous shadow! 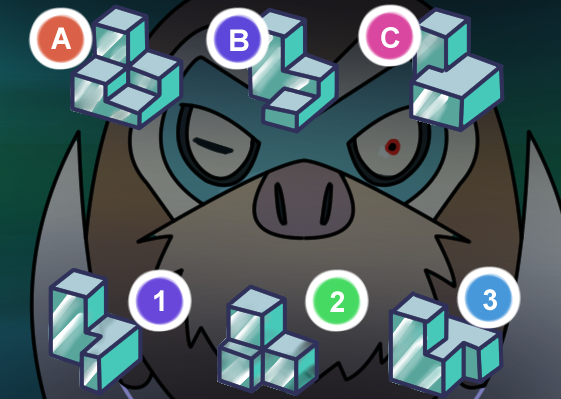 Turns out it was Mamoswine using Earthquake to mess up the forest. Mamoswine doesn’t seem to be well…
While you were fighting against one of the other mischievous Pokémon, it used an Ice-type attack!
Three ice blocks will attack you from two opposite sides. Each piece from A, B and C will fit with one piece from 1, 2 and 3.
Can you work out which piece fits with which in order to dodge them?

Happy holidays! Delibird’s here to celebrate the holidays and spread gifts to all well-behaved Pokémon! 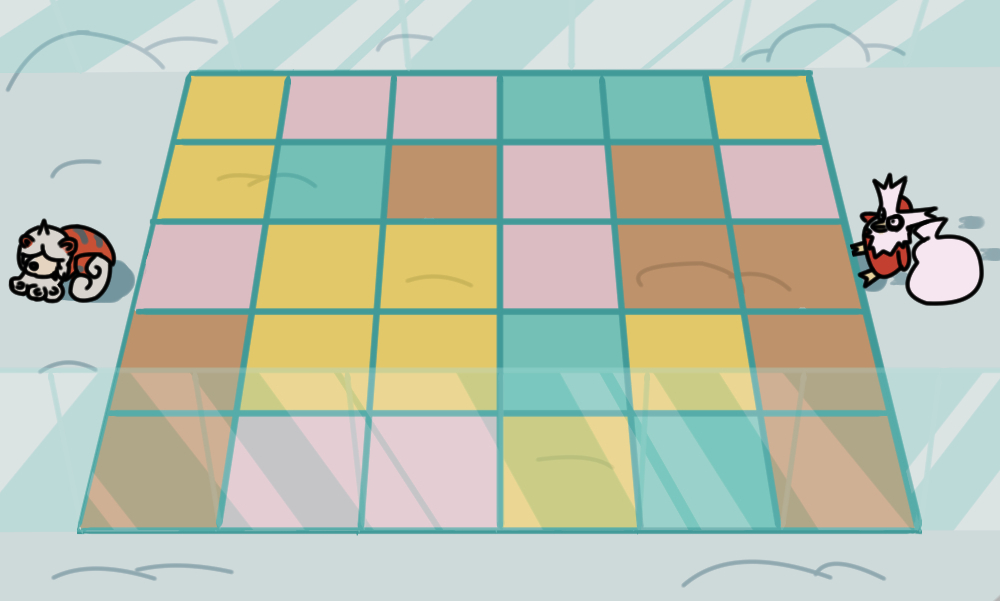 But some naughty Psychic-type Pokémon got mad for not getting any gifts, so they made it harder for Delibird to gift the nice Pokémon with a maze made of Light Screen. There are invisible walls on some squares, but there’s a path where Delibird can safely deliver the nice Pokémon its deserved gift!
You can help Delibird get to the nice Pokémon by assigning each of the four colors, Brown, Pink, Yellow and Blue one command between Move Forward, Jump Forward, Move Left and Move Right.
From Delibird’s point of view, which combination guides it to the nice Pokémon?