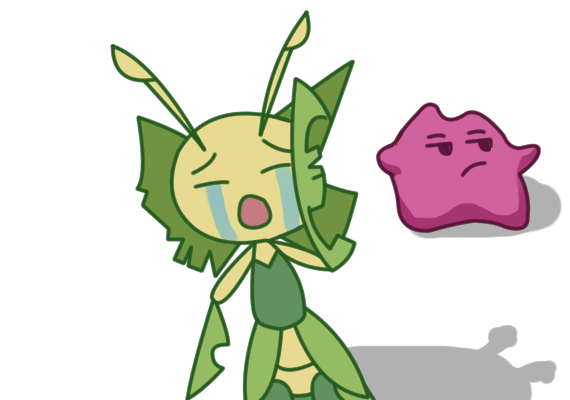 The real Leavanny is the one on the Left!
Since usually you don’t trim yourself, they tested their skills on each other. Leavanny is the only one good at trimming and tailoring for others, so if Ditto ever tried to trim or tailor for someone, it’d end up making a mess…just like the Leavanny on the left.
You found the real Leavanny!
But sadly, its outfit is ruined forever now…

Some shadows seem to be different from Clefable…
From the left, the second has one spike too many. The third has its ears positioned differently, and the fourth has its legs too far apart. Only the leftmost one matches Clefable accurately. Bullseye!
It hit the 100 points section once.
But it missed all the rest…
Pumpkaboo might want to practice some more.
Who knows if it could miss and hit us instead?

Litwick’s been lonely inside an abandoned mansion, so it lit 11 real candles to try and fill the hole in its heart. The eight candles that manage to stay lit will melt down completely by the time Litwick wakes up.
The only candles that remain in the end are the three that were extinguished by the wind and therefore didn’t melt.
Only three out of 11 were left…Well, it’s fine if Litwick seems happy.

The correct hole was A!

But sadly, by the time you got there, the berries were all gone… 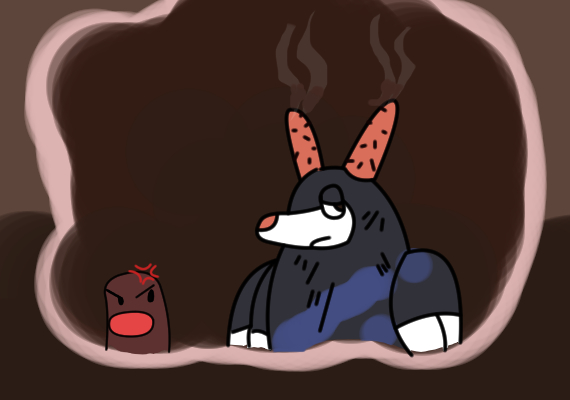 Kecleon was hidden in Boat 3! 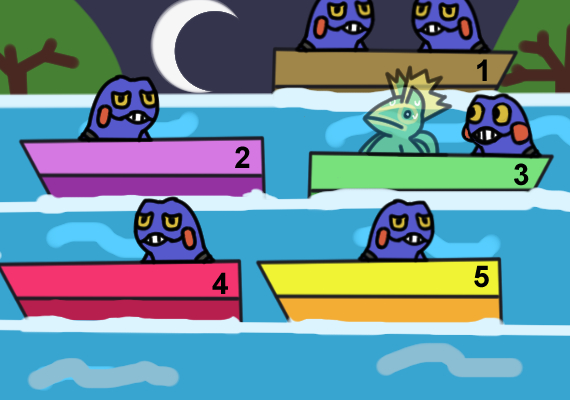 Taking a closer look, it’s obvious that Boat 3 has two Pokémon like Boat 1, as opposite to all others. It’s sunken down a bit.
Now Kecleon won’t bother anyone anymore!
…Hopefully. The small sized was eaten by B, the medium sized by C and the large sized by A.
Slurpuff A must have wanted to cover up its greed. It may look unfair for Slurpuff B, but why did it bother to lie?

You found a decisive clue that pointed you to the right track, but the mischievous Pokémon already ran away! 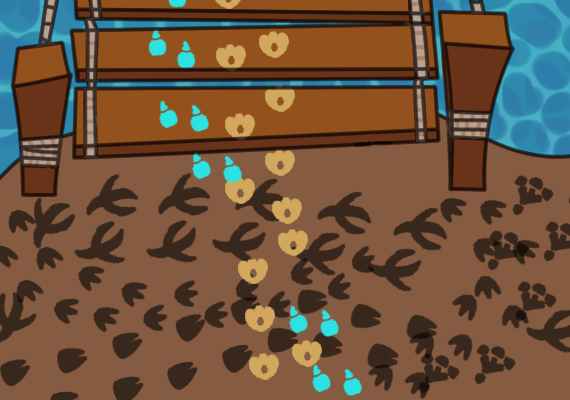 For Pokémon, there’s a few more ways they could’ve crossed the bridge without being known, but since you’re only looking at these prints, you can tell that only 2 Pokémon crossed it.
It’s too much of a coincidence that all these prints before the bridge are fresh. Maybe the mischievous Pokémon should’ve also planted those when they crossed the bridge?

You need to arrange the orbs as shown or a rotation of it: 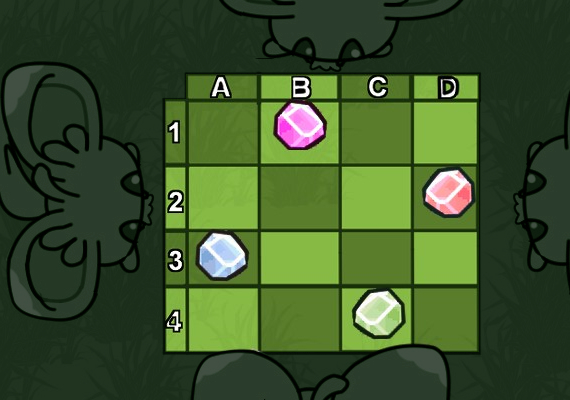 Arrange the Pangoro as shown and there shouldn’t be any fights. 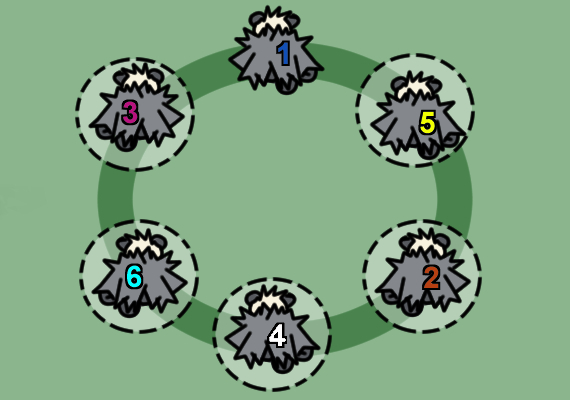 You can also horizontally mirror the order and it’ll work just as well!
It’s scary how they fight and are still friends. Or does that show how close they are?
Regardless, it’ll be a peaceful walk for the Pangoro now! The answer is five Meowth! C came in first, A second, B third, and D last.
Sounds like it was a hot race!
Too bad for D…It couldn’t dash fast enough to keep up with the others.

The liar here is Slurpuff C! 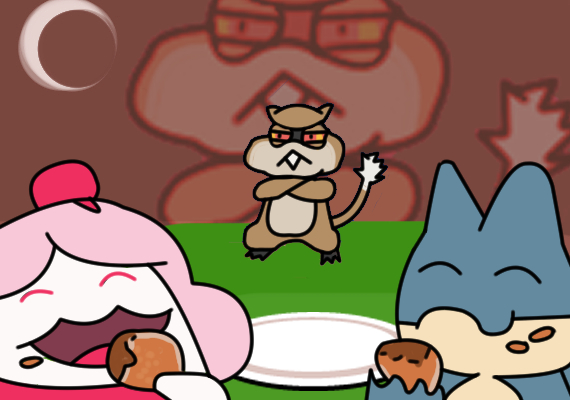 Both Munchlax and Slurpuff C ate the Poffin.
If Munchlax is lying, then both Patrat and Slurpuff C would be liars. If Patrat, who was nearby, was lying about Munchlax eating it, Munchlax would be too, and so would Slurpuff C then. The only one who could lie by itself is Slurpuff C.
What mischief! Looks like Slurpuff C is a real glutton.
But something seems…ominous about Patrat just standing there.

If you trace all the paths the Spinarak will cross on their way out, you’ll be left with the only safe place to descend to. The answer is A!

It looks as if its path was an S! 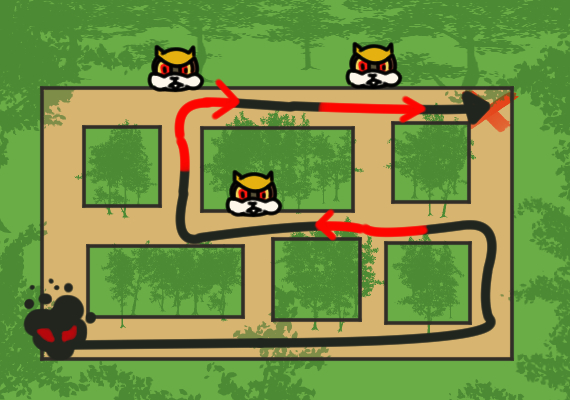 Just what was that shadow?

That’s right! Only one Charmander is necessary! Alternatively, we could wait ages until the ice melted itself.
Now that you solved this riddle, Charizard should be safe!
…Right?

There were 394 Mareep in total!
Did you know there was more than two ways you could get to the answer?
There might’ve been more Mareep than Komala saw, but it probably was too tired to be able to count more… It looks as if it’s a mirrored S if you squint a bit, doesn’t it?
Now that you know the shadow’s path, it’s time to go to the final area, safely!

Pumpkaboo and Clefable want to help too! 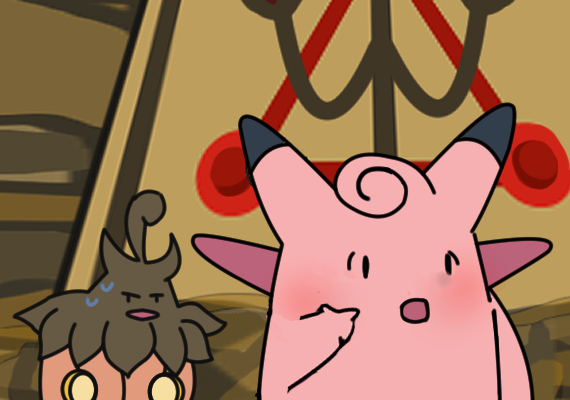 Their goal is to catch up with you. If you’re only 100 meters away from Clefable, Pumpkaboo will start running when Clefable arrives where you are.
So it’s possible that the minimum time it would take Pumpkaboo to catch up with Clefable is as little as 50 seconds.
Help has arrived!

Each of Smeargle’s paints represent something. 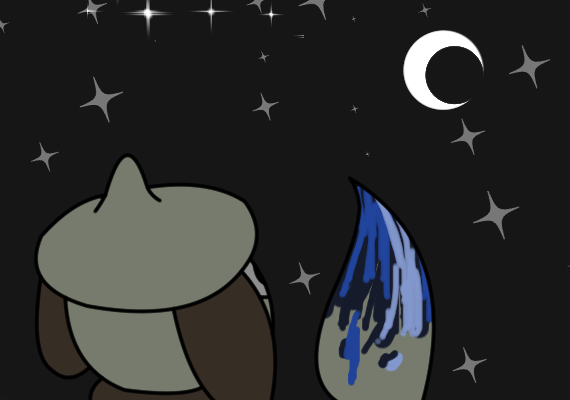 As you arrive at the lake, you notice the ancient door supposed to guard it. 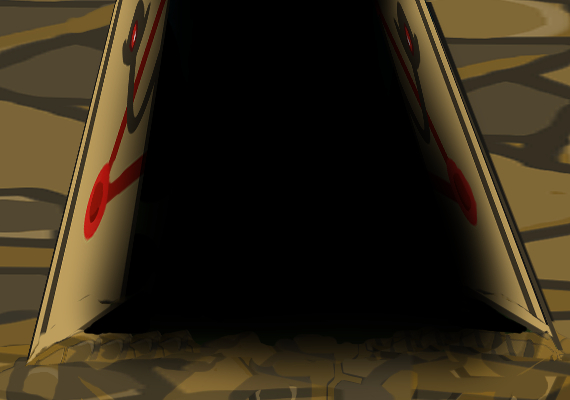 An alarm will go off if any of the three buttons are pressed, so Button A doesn’t need to be pressed since the alarm’s sound will replace it.
Since sound is the vibration of air, Button C doesn’t need to be pressed either, because if any alarm goes off, the door will vibrate.
But the only way to make it light is by pressing the Button B, and that’s the only button you need to press to sound all three alarms.
What’s behind the door?

The real Leavanny are on the top row, in the middle and the right! 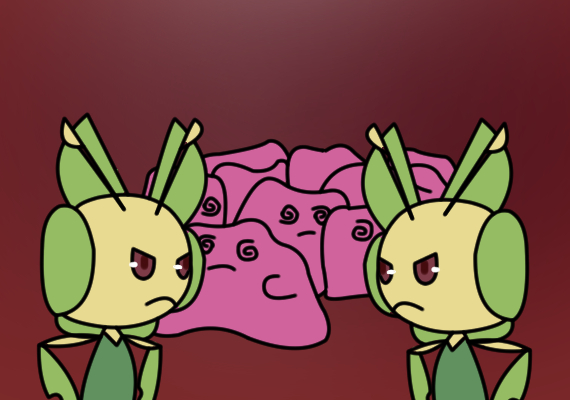 Looks like Ditto should’ve thought of a better way to know themselves!

The liars were A and B!
A said that nobody is lying, and B said that one Gengar is lying. They are saying different things, so at least one of them must be lying.
C said that two Gengar are lying. A, B and C are all saying different things, so that means that two or all of them must be lying.
Since there’s a maximum of two liars among the Gengar, that means only two of A, B and C are lying. One of them is telling the truth, which means D was not lying.
B must be one of them, since it would contradict both A and C!
And since B is lying, A’s lying about there being no liars! 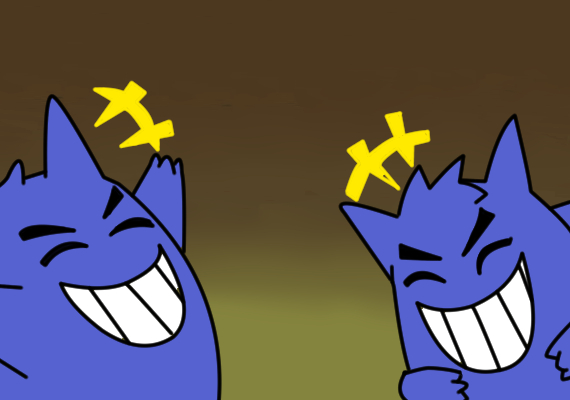 You hear the Gengar say they didn’t mean to bother anyone. Can you trust them?
It seems they really enjoyed the games. Looks like they’re not done playing yet!
Maybe you’ll meet again later?

The lowest possible score is 35! Since the target is a mischievous Pokémon and Pumpkaboo did hit three different sections of it, Pumpkaboo didn’t miss any shot this time.
Outside practice, Pumpkaboo managed to hit when it counted! 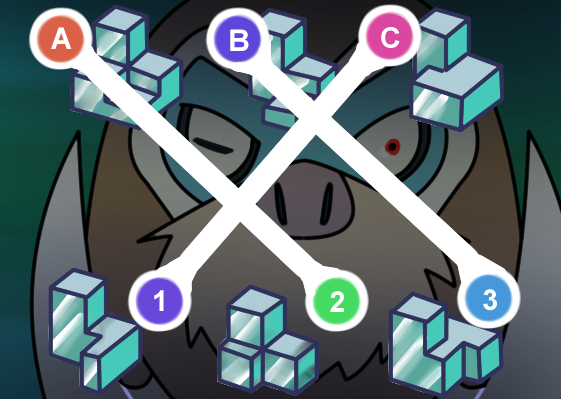 You managed to dodge Mamoswine’s attack! 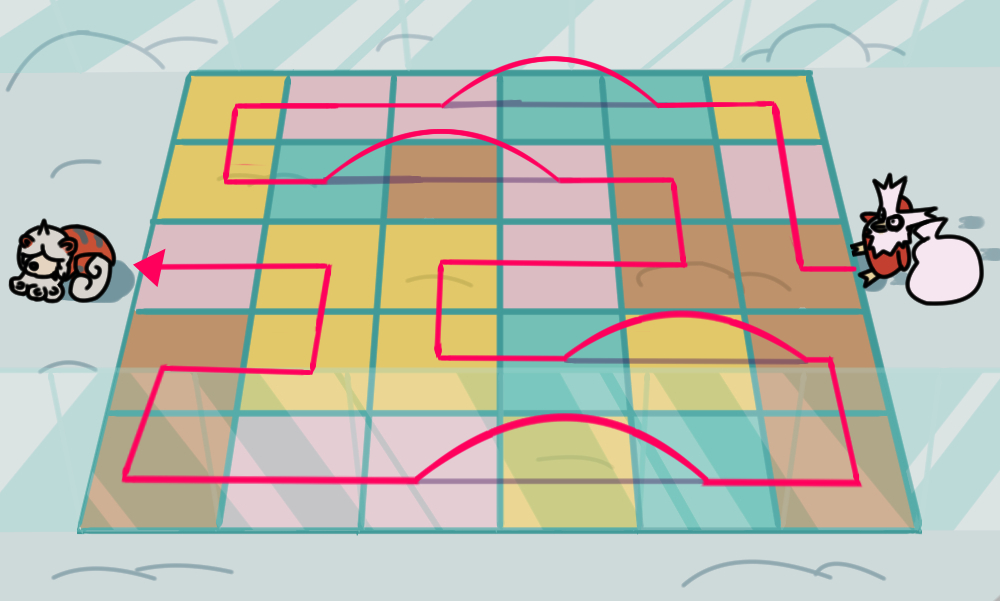 This is the correct path!
To get to the nice Pokémon, you must assign Pink to Move Forward, Blue to Jump Forward, Brown to Move Right and Yellow to Move Left.
Now the nice Pokémon gets its gift!
And someone will remain on the naughty list for a while… 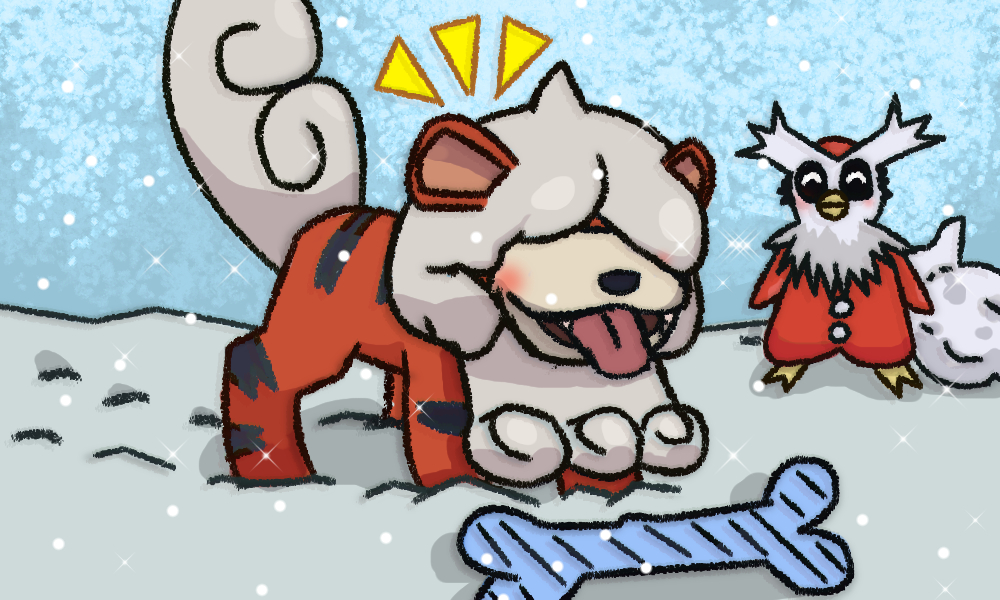 And that’s all of the Puzzles! Were they a challenge? And how many did you get right?