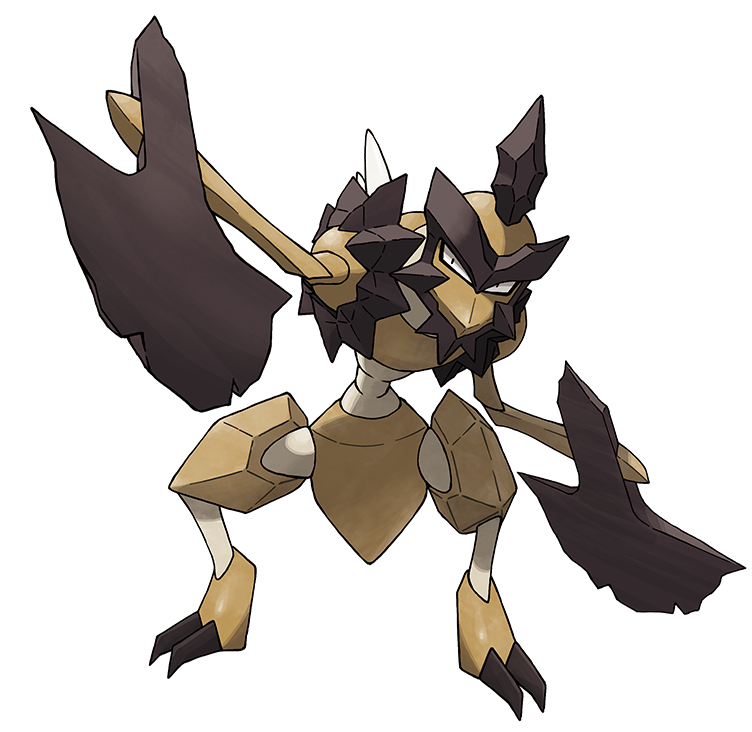 Kleavor can appear as an “Alpha” Pokémon, which are larger than normal and have glowing red eyes. They’re a challenge to fight but can make “great allies” and also have a chance of dropping rare items.

Special minerals found in the Hisui region cause Scyther to evolve into this Pokémon. Parts of its body have hardened into stone. The stone parts often get chipped during fierce battles, and Kleavor that have survived many battles will display larger chipping across their bodies. However, the chipping actually makes these stone parts sharper, increasing their slicing power. It is said that the people of Hisui once used pieces of stone that had fallen from Kleavor to craft tools.

Even a casual swing from one of Kleavor’s large, axe-like arms is capable of delivering a devastating blow, dealing massive damage to the hardiest of opponents. Kleavor uses its arms to carve symbols into tree trunks and even chop trees down to mark its territory. If you come across trees with markings made by a sharp blade or a row of trees cut down in a crisscross pattern, it could be the doing of Kleavor.

Part of the story involves helping calm down Frenzied Noble Pokémon (a Nobel Pokémon having “received a mysterious blessing”). Not only do you have to best them in battle – you’ll need to to hit them with balms made using these noble Pokémon’s favorite foods while they are stunned.

An “Arc Phone” device will be given to you early in the game, which can display the map and take photos (and likely more). It has some connection to Arceus – maybe he’s into the latest in tech. This doesn’t apply to the PC system however – instead, any excess  Pokémon you have get left in a pasture. Six Pokémon remains the party limit.

Jubilife Village contains shops, including a clothing store, and an area for taking photos of yourself and your Pokémon.

In the Sinnoh remakes, meanwhile, we learnt that the Pokétch is returning, and also allows you to use Hidden Moves. Rest easy – you don’t need for your party Pokémon to know the moves.

Only four apps of the Pokétch have been officially named and revealed so far – Digital Watch, Memo Pad (for taking notes or drawing), the Dowsing Machine (the Itemfinder), and Friendship Checker. You can also use it to call out wild Pokémon to perform Hidden Moves for you, from Cut to everyone’s favourite Defog.

Amity Square returns, and this time you can bring out six Pokémon at once – no restriction! After you visit Amity Square, one Pokémon can also follow you in towns, cities and routes.

The Day/Night system is back as well, and you can mix berries together to make Poffin. Drifloon remains a one-day-a-week Pokémon – hope you play on Fridays! We also got a look at the second Gym and its puzzle (a tree maze) and its Leader, Gardenia.

What are your thoughts on the news?