It’s time for a new generation! Pokémon Scarlet and Violet have released this weekend, and brings with it new Pokémon. Of course, this also means new Shiny forms to hunt for! Here we cover the main things you need to know about Shiny hunting Pokémon in the new region of Paldea.

As with previous games, the base rate for a Pokémon to be Shiny (have a different colour than usual, and a sparkle effect when starting a battle) is 1 in 4096. Unfortunately there is no sound effect for it on the overworld.

If you complete the Paldean Pokédex, you will be rewarded with the Shiny Charm item which grants two extra Shiny rolls. By itself, you have a roughly 1 in 1365 Shiny chance.

Certain food combinations in sandwiches can grant you Sparkling Power. At level 3, this grants 3 extra rolls. Various recipes for Sparkling Power Lv. 3 can be found here. This can stack with the Shiny Charm as well. This also would combine well with Encounter Power, to increase the chances of finding a Shiny.

Outbreaks are one other way to Shiny hunt. If you find an Outbreak, ‘clearing’ (knocking out or catching) 30 or more Pokémon from that Outbreak gives you an extra roll, and 60 or more gives two rolls. With a Shiny Charm, Sparkling Power Lv. 3, and an Outbreak with 60+ Pokémon cleared can increase the Shiny rate to ~1 in 512. The below graph summarises the various combinations, and notes you can save and continue on finding a Shiny if you are worried about failing to catch it.

Lastly, there is the Masuda Method – breeding Pokémon from games with different languages via the Picnic system (i.e. waiting for Eggs to appear while hosting a Picnic). You get six extra rolls at a Shiny this way – eight total with a Shiny Charm (again ~1 in 512).

Tera Raids are not able to be manipulated by skipping ahead in date like with Dynamax Raids in Pokémon Sword and Shield. However, if you do happen to encounter a Shiny Tera Raid Pokémon, reload and share it with friends! You’ll hence want to save before any Tera Raids you host. 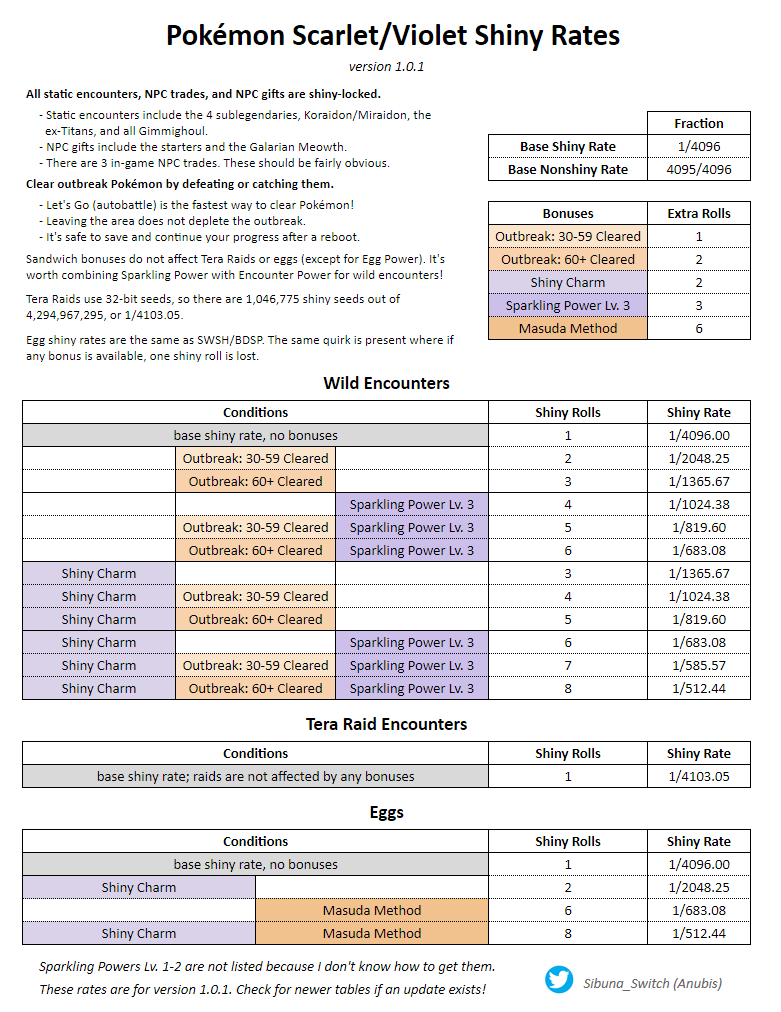 What can’t be Shiny

All static encounters in the game are “Shinylocked” – they can not be caught or obtained in their Shiny forms. This means the Starters at the beginning of the game, Legendaries and Mythicals, and in-game Trades cannot be Shiny.

Shiny Pokémon appear that way the moment they spawn – no need to battle or catch them first.

The best Shiny hunting method in Scarlet and Violet

As mentioned above, you can reach a ~1 in 512 chance through Outbreaks or Masuda Method (breeding). However, you can view many more encounters than hatching Eggs – each wave of an Outbreak has roughly 25-30 each! Therefore Outbreaks are the best way to hunt for Shinies. Abuse the Auto Battling mechanics to speed up the ‘clearing’ – you really want to just knock out Pokémon in the Outbreak rather than try to catch 60 of them! And don’t worry – your own Pokémon will not fight a Shiny wild Pokémon by itself. Phew!

You can also use Picnics to reset spawns.

Outbreaks in SV grant 2 extra shiny rolls once you have cleared at least 60 Pokémon. At that point, you can simply despawn/respawn them until you get a shiny.

Walking works, but here's a demo of using picnics to purge the field. pic.twitter.com/wHlQqHCkTK

You can save once you see a Shiny, and if it flees or faints, you can reload your save file, and it will respawn. Finally, a word of warning for multiplayer – everyone will see the same Shiny Pokémon, and once someone catches it, it is gone. Don’t break up friendships over a Shiny, unless it’s particularly cool looking! Note you can also regenerate spawns by going in and out of Town borders. This will remove any Shinys that have spawned however…

Let us know what Shiny Pokémon you want to find, or have already found, in Pokémon Scarlet and Violet!

Thanks to Anubis for the rates.
Cover image courtesy of Avatar.
Edited by Sheep.