Resembling a nut with the base of a Ditto and the eye of a Magnemite, this Pokémon confused many players, especially with its immediate transformation into Ditto upon capture.

How to encounter Meltan, whether in Pokémon Let’s Go Pikachu/Eevee, or in Pokémon GO, is currently yet unknown, but the video suggests that the “Ditto” appearances of the Pokémon over Community Day may not have been entirely unintentional. The video features a voiced Professor Willow and Professor Oak — Oak’s appearance potentially hinting at a link to the Let’s Go games.

Most of Meltan’s body is made from liquid metal, and its shape is very fluid. It can use its liquid arms and legs to corrode metal and absorb it into its own body. Meltan generates electricity using the metal it absorbs from outside sources. It uses this electricity as an energy source and also as an attack that can be fired from its eye. Clearly a curious Pokémon, Meltan is very expressive and shows an interest in all kinds of things. 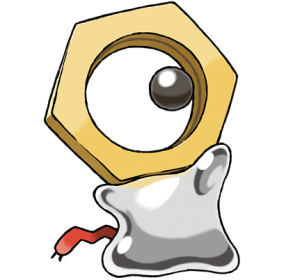 A tweet from The Pokémon Company International confirms this hint, possibly showing Meltan as a playable Pokémon in the upcoming Switch games:

What are your thoughts on this Pokémon? Is it a mythical Ditto clone? Was the leak intentional?