Update: The GO STADIUM event, originally scheduled for this evening in Japan, has been cancelled to ‘inconvenient’ circumstances. It is possible bad weather is to blame. Another part of the live steam (a Pikachu parade) is being streamed but has nothing to do with the GO STADIUM event.

A Pokémon GO STADIUM event has been announced in Yokohama, Japan. This event will take place on August 14th, the final day of Zapdos’ availability in Pokémon GO. 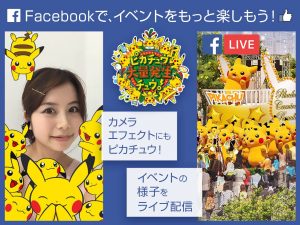 There will also be a live stream taking place during the event through Pokémon’s official Facebook page. Other than a Pikachu parade, no other information is currently known. We will update you as soon as new information arises.

Are you hoping for some sort of announcement or news during the event?

Credit to bobandbill and ddrox13 for the info.

Edited by bobandbill and Radiating.