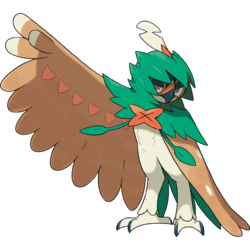 Ever wanted to have a Ghost Pokémon as a friend? Great, we make fabulous pets (well, most of us). Of course, like any pet, you will need to give it some food. The Pokédex conveniently has a list of many Ghost-types favorite foods! Luckily for those who don’t want to scour through hours of Pokédex entries, I, Decidueye, have made a nice list for you!

Just ctrl+f (or cmd+f on Mac) the Ghost you want to care for and make your new friend happy! I’ve even included what Pokédex the info came from (Ye is Yellow, St is Stadium (covers stadium 2 as well), Rse is Ruby, Sapphire and Emerald, Pt is Platinum, ORAS is Omega Ruby and Alpha Sapphire rest are self-explanatory). You can thank me later.

#92 Gastly – Given it is made almost entirely of gas (all), I don’t think you should waste much effort feeding it.
#93 Haunter – Human life force (Ye/R/Rse/P/Y/ORAS)

#353 Shuppet – Envy (Rse/FRLG/HGSS/X/ORAS), malice (FRLG/HGSS/X) sadness and hatred (B2/W2), jealousy and vindictiveness (ORAS), vengeance (Rse/D/P/Pt/B/W/Y/ORAS). At least you have a lot of options!
#354 Banette – You can’t feed a Banette, as dark energy would escape if it ever opened its mouth! (Rse/FRLG/Y/ORAS)

#355 Duskull – No foods listed, but it does randomly “spirit away bad children” (Rse/HGSS/Y/ORAS), and I can only think of one place it would put them. The back of a very deep dark cave, that’s where.
#356 Dusclops – “Absorbs anything” (Rse/FRLG/DP/ORAS).

#442 Spiritomb – None listed, but it certainly seemed like he wanted Grovyle for breakfast in PMD2.

#478 Froslass – Rather than eating its prey, Froslass freezes them with its breath and displays them as trophies (Pt/BW/B2W2). Weird. It’s not like I do the same thing with my hunting trophies…

#479 Rotom – Its body is made of electrified plasma (DP/Y/ORAS), so pretty much anything should get burnt to a crisp before it goes anywhere near its mouth.

#487 Giratina – Do gods need to eat? No, and if they do it is more honorary sacrifice than daily feeding. Also, if you somehow get a pet Giratina I will be thoroughly impressed.

#724 Decidueye – Give me a break, I hunt my own food. I don’t need you annoying Trainers feeding me. The bow isn’t just for show, kids. Now move on before I Spirit Shackle you in place. SQAWK!

That’s it for now! if you have any more questions about caring for your Ghost-types, don’t hesitate to ask me in the comments! Happy Halloween for those who celebrate it, happy end of spooktober for those who don’t. Now where was I… OH RIGHT, I was about to hand out some candy to some Pokémon. Got to go!

Edited by bobandbill and Z25