The Pokémon Sun and Moon demo is chock full of secrets — ones that unlock when you play, and data that you could never see without data mining. We’ve touched on the fact that the demo has various little time-based events that happen depending on the day you play. Some of these events come with bonus items too, which you can transfer into the full game! Read on to find out what they are and what you’ll get from them.

These time-based events occur from the first play-through after you’ve completed the main part of the demo (so, the day you receive your Ride Pager). If you don’t want these spoiled to you, know that something happens on day 1, 4, 6, 13, 19 and 25. Check out our preview article for the spoiler-free lowdown. 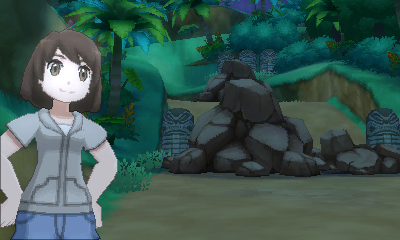 From the first day after completing the demo, various NPCs will appear around Hau’oli City.

This woman will take you to Mahalo Trail. Call Tauros using the Ride Pager and break the rocks to reach the top. A self-named “mysterious old man” will greet you at the top and give you 3 Stardusts, which you can transfer to your copy of Sun and Moon. While it seems he might have something else, subsequent visits will make him comment on it while not having anything to actually give. Oh well.

On the same day, some new Trainers will appear on the path to Ten Carat Hill. Battle three of the Trainers around the beach area — this includes the Youngster who you see in the main part of the demo. Once you do so, the Ace Trainer at the start of the road will challenge you to a battle. Beat her to earn a Star Piece — but be careful, as she has a Level 42 Pikachu in her party, so be sure to heal up before challenging her. 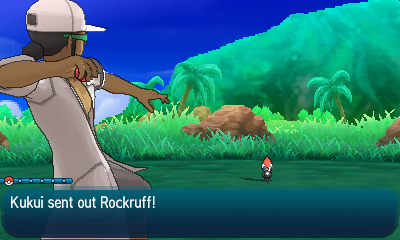 You might choose to instead go east from the base of the area — you’ll need to smash the path open with your Tauros — to play the Pokémon Catching Challenge. Using a set selection of Poké Balls you get, catch as many Pokémon with those balls as you can. Catching three or more earns you a Nugget. Before it starts, you even get a Pokémon catching tutorial with Professor Kukui! Sadly, you won’t get to keep any Pokémon you catch, so you might not want to take too much time doing this.

Other NPCs that become available in Hau’oli City will tell you about the events we’ve been talking about in this article, so you’ll want to drop by to reap those cool bonuses! You can talk to these NPCs each day if you forget where you’re at. 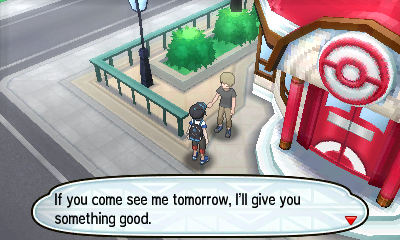 The first bonus you can grab is from a man standing right outside the Pokémon Center. He specifically wants you to meet him on this day. He’ll give you ten Pretty Wings for simply chatting with him. 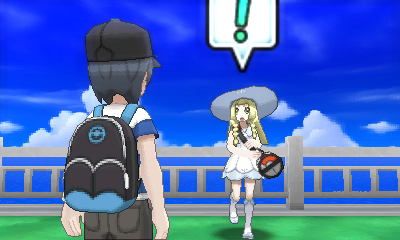 According to Serebii (we can’t figure out the exact day ourselves), Lillie appears on Day 4. She clearly didn’t expect to be approached by anyone, and runs off before anyone can ask her who she is or what’s in her bag. She does inadvertently reveal that it’s a Pokémon, before running off saying she’s off to meet Professor Kukui.

Kukui, by the way, continues to stand inside the Pokémon Center. Guess they never met up in the end… 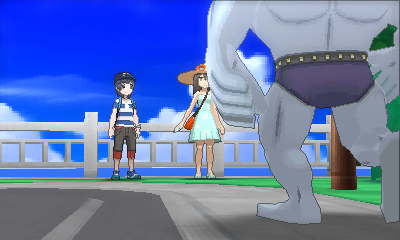 A girl in the town’s southwest talks about who she’s meeting — someone who rescued her recently. Once the day comes, she meets this person. He’s not a Trial Captain or anything either — he’s a Machamp.

By the way, she takes this guy down to the beach. She eventually comes back, and you get… nothing. 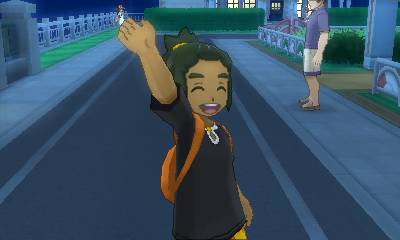 If you pop by the Malasada shop on a Sunday night, you’ll come across Hau, who comments on how the weekend’s almost over. And you get to enjoy a malasada.

Hau is one fun dude. 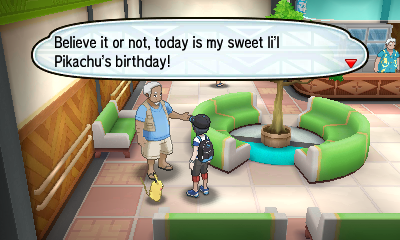 This old man and his Pikachu are about to get another year older. Celebrate with them 12 days from when you start to receive a Balm Mushroom! No, no invalidated-copyright Happy Birthday songs required for this celebration. 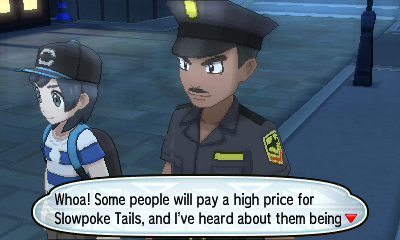 A policeman by the marina (south of the Shopping District) has heard of a shady deal happening on day 19, and is unsure of whether he can tackle it himself.

Accompany him on the day and witness two men standing in front of Slowpoke… and admiring them. Guess Alola loves their Slowpoke. Oh, and don’t expect anything for helping the guy. Guess we could’ve just left him alone for this job. Points for the humor, though. 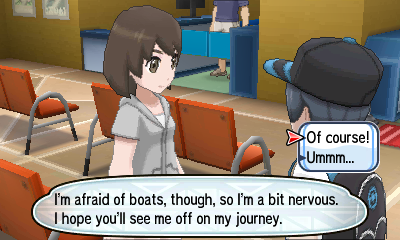 A girl in the Ferry Terminal is going to ride a boat in 24 days from when you start the demo. She’s sailing away, and since she’s nervous, you promise to her to see her off.

You’re treated to something a little eerie in return, but at least you get a Comet Shard. Happy that you’ve fulfilled your promise, the girl walks off, stating that she can, at last, “see [her] mom and dad again”, before walking towards the terminal gates. One of the terminal’s Machamp workers walks past the screen, covering her from view, and once it’s out of the way, she vanishes.

No, you’re not the one… imagining things, are you? 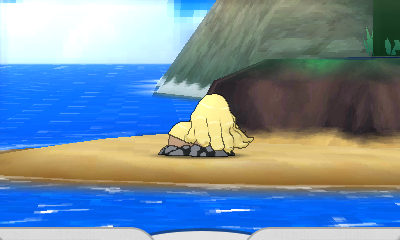 After a certain amount of time, a girl will appear at Ten Carat Hill’s open beach. Speak to her and she’ll point you to see the “soft looking”, “fluffy” thing she’s seeing. Your Poké Finder will be upgraded with a zoom function so that you can see it in full view.

And what might that fabulous Pokémon be? As it turns out, it’s Dugtrio’s Alolan form! 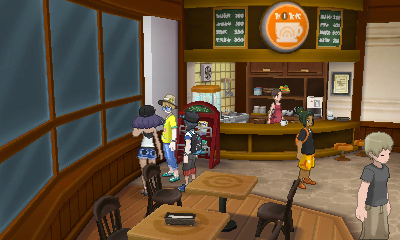 At some point as the days roll by, Sina and Dexio will appear in the Pokémon Center by the café. They’re pretty much here to sightsee, of course. They comment that they feel like something’s going to happen — wonder if they’re talking about the full game?