As described by The Pokémon Company:

In Pokémon Sun and Pokémon Moon, you can draw forth a Pokémon’s power to its utmost limit with Hyper Training.

Pokémon grow stronger by raising their levels and increasing their base stats. However, their power is still affected by the individual strengths innate to each Pokémon. Now, with Hyper Training, Pokémon that have grown to Lv. 100 will be able to increase their individual strengths, which has never been possible before.

The fan response to Hyper Training has been largely positive. People enjoy that it could cut time from breeding for a perfect Pokémon or constantly soft-resetting. But how does Hyper Training do this? Why was it necessary?

People have the potential to break certain limits. The same logic could most certainly be applied to Pokémon — and it’s definitely not cool to say an individual Pokémon is useless when it’s incapable of being any stronger. That starter Pokémon you received at the start of your journey, the Pokémon you travelled and made memories with, the wild Pokémon you found, or even that really cool shiny would likely be considered useless in competitive battle — why? Because you had no input into its individual strengths.

The metagame has required people who battle competitively to keep track of an increasingly large amount of variables. You’d have to consider what moves your Pokémon has. What ability it has. Whether it’s gotta be a shiny or not. Or, say, its EVs and IVs.

And that means filling your boxes with eggs until you’ve made that “perfect” Pokémon — and that’s a lot of work. Perhaps for some, it definitely pays off. But to find out how to get the “right” Pokémon for the right kind of battle, trainers end up jumping hoops. A lot of the skills used to create that perfect Pokémon require an extensive understanding of the Pokémon games’ mechanics. How to breed, how to chain egg moves. How IVs are inherited What items to use in breeding. The list goes on, and it is a chore.

How it benefits the metagame 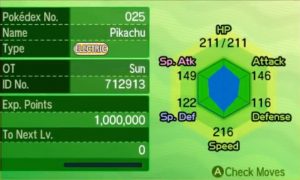 Exposing EVs and IVs (or “base stats” and “potential”, for those who follow the game terms) to everyone can only level the playing field. It shifts the focus from getting “perfect” stats of a Pokémon to focussing on a Pokémon’s effective moves, stats, abilities and strategies.

It also means that the Pokémon you transfer from previous generations, including Red, Blue and Yellow‘s Virtual Console releases, will be able to join the fray as well.

There’s two requirements before your Pokémon will be able to start Hyper Training. One is being at Level 100, which gives players an incentive to actually get a Pokémon to that level. Let’s hope they don’t make it harder to level up! (Black and White, we’re looking at you.)

The second requirement is to get Bottle Caps, which are available in-game. These Bottle Caps are given to Mr. Hyper — a man who loves to collect Bottle Caps (someone else comes to mind) and will train your Pokémon in exchange for them. This requirement seems rather arbitrary — let’s hope there aren’t a finite amount of them. That said, the Magearna being distributed as a QR code for those watching the latest Pokémon movie in Japan will hold one.

All in all, it’ll be exciting to see more people enter the competitive scene. It’s nice to be able to finally have Pokémon reach their fullest potential, too.

Pokémon Sun and Moon arrive November 18, and look to have some cool features for everybody.