G: Hello everyone! Fact Checking Gardevoir here, on a trip in Kalos’ region! Today, we are at the quaint Laverre City.
Did you know this big and ancient tree, right there, is rumored to be one thousand and five hundred years old? Laverre City was founded around it, and it’s so large that people even built an entire gym in its venerable trunk!
Now, I still haven’t told you what special occasion we have come here for. Well, it is for an interview… with Kalos’ favourite Sylveon, Fairy! 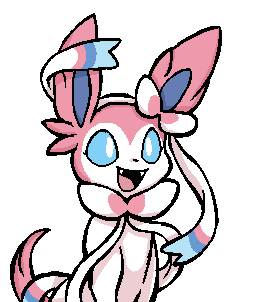 F: “Hello, everyone!”
G: So, Fairy, our first question is, how did you get your name? If I remember well, your eleventh birthday is in ten days and, ten years ago, there must not have been many people knowing about Fairy types, as Johto and Kalos’ regions still were unaware of each other.
F: “Oh! I chose the name Fairy for myself a long, long time ago, even before Kalos had become known to the greater world. It had always felt right to me!” 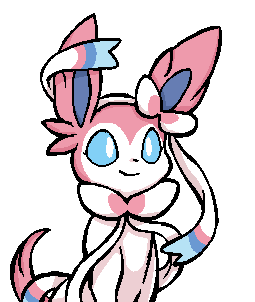 G: Could you tell us where you come from?
F: “Of course! I was born in the wild forests outside Violet City, in the Johto region!” 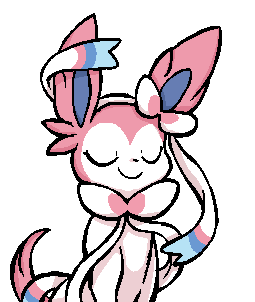 F: “I have five siblings – four brothers and one sister – who would always tease me for leveling up slower. So, I spent a lot of time around the Sprout Tower!
Those nice monks fed me berries, pet and groomed my tail, and taught me about the world and how much better it would be if people and Pokémon lived in harmony!
I believe it was the affections of those monks that predestined me to evolve into a Sylveon. This is when I learned the Baby-Doll Eyes move, unlike my siblings. This move earned me more than a few sweets!” 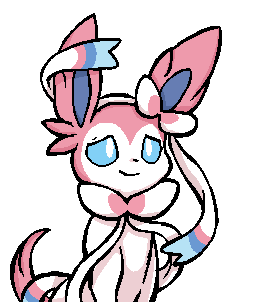 “I didn’t feel… very close with my family for being different.”
G: I think I know how you feel… in my own family, they had trouble understanding why I was more interested in joining a TV show than in battling. But we both had the luck of building strong friendships with people who accepted us for who we were! 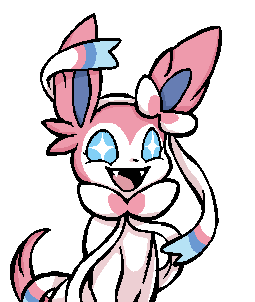 F: “Indeed! Even before I evolved, I naturally began developing my emotional awareness. I became very good at bonding with people, as well as showing compassion and empathy.”
G: I have no doubt about it. Having someone like you around can brighten anyone’s day, whether in person or through Internet forums! Which brings us to the next question: How did you start such a successful career? 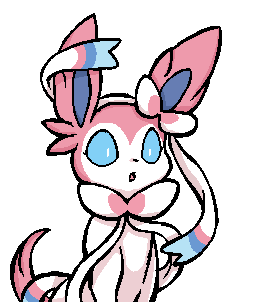 F: “I’ve never heard anyone refer to it as a successful career before!”
“I set off on my own, believing in myself, and gained experience through resolving conflict around me. I travelled far and often to help as many people as possible! Then, one day, I overheard people talking about *Internet drama* and I just knew that’s where I needed to be. I discovered a forum about Pokémon made by humans, for humans.” 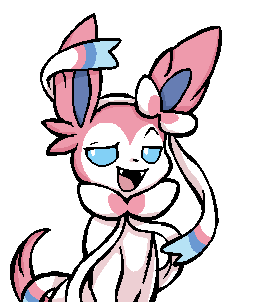 “I was still an Eevee at this time, but I began by helping humans to understand competitive battling. I shared my knowledge about Pokémon’s Natures, Abilities, Movesets, Effort Values, and Individual Values as they are very important!” 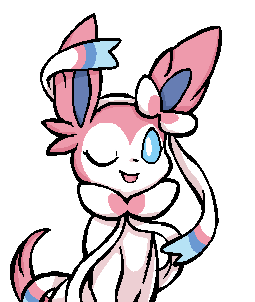 “You know, the obvious stuff every Pokémon knows about.”
“I made many loving human friends and felt so welcomed and accepted. I also learned other Pokémon also visit the forums too!”
G: I heartily approve! Pokémon are undoubtedly able to do more things just like humans!
On that topic, can you tell us about the other Pokémon you have been working with?

F: “I’d LOVE to! There’s a darling Shaymin in Sky Forme, a dear Ivysaur whom I care about very much, a Milotic who has taught me even more about compassion, an outgoing and always sunny Cherrim, the Flaaffy who is the leader of this community – and inherited it from a human -, and a fierce, powerful Dragon type with whom I formed a rivalry with!” 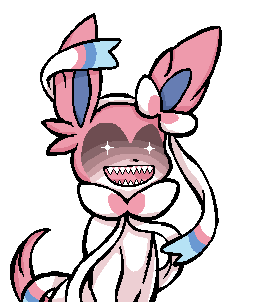 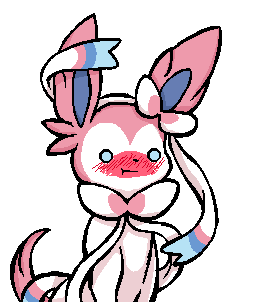 “Ahaha… anyway!! I could go on for quite a while listing every Pokémon I’ve met and worked with, but that would take a long time!”

“You know who you are!!”
“While participating in competitive battling, I also began interacting with the community through contributing art! Then, during one snowy evening in Snowbelle City, Kalos, I evolved! I was officially Fairy, in name and type. In Kalos, I learned about the Fairy type but I never had suspected myself to become one.”
G: We could say you found your destiny!
F: “I suppose so, yes! I immediately hopped online to tell everyone about my evolution. I then received a private message asking if I was interested in moderating Art and Design. I have spent many years on Pokémon Forum, helping artists improve their skills and sharing art of my own. I welcome everyone who opens themselves to me through art, and they can feel the sincerity in my words. I also used my newly developed instincts to stop plagiarizers and thieves.”
G: I see your abilities as a Sylveon, to erase enmity and resolve conflicts, has been put to good use!

F: “Later, I began moderating Meet and Greet, as I felt uniquely equipped to help new members. I welcome everyone without judgement. I wanted to contribute in spreading a warm and inviting aura across the boards. I get involved in a little bit of everything! I strive to put the others’ feelings before mine. I resolve in staff and out of staff conflicts by listening to all sides, by urging productive communication, and by spreading waves of pacifism.”
G: This forum sure is lucky to have you!
F: “Thank you. I recently was promoted again to Moderator Lead! My job is now more than just taking care of the areas I moderate.
I have since found love for making clubs, moderating The Club House. I also began collecting Sylveon trading cards, and moderated Pokémon Trading Card Game. I have participated in coding projects for the forum, as I have become a part of the PC Development Team. Lastly, I have helped assembling a forum-wide game about raising Pokémon for people to play. As such, I moderate Virtual Pokémon Pets.
But I am also tasked with “taking care” of the mods! Keeping harmony and conflict resolution come easily because the staff are wonderful humans already! I supply enthusiasm and confidence to those mods who need it. I lend compassion and understanding to those experiencing difficulties. They say I am the voice of empathy.”
G: I have no doubt you are fully deserving of their praise!

F: “Goodness, thank you!”
G: And what of your situation now?
F: “I have settled here in Laverre City, living an enriching life both online and offline. I do surprise myself everyday by overcoming a fear or doing something new. I am happy with my life partner, and I work on being the change that I want to see in the world.”
G: A truly inspiring Sylveon we have here! Devoted to spread happiness and joy to people around her as well as before a screen! Let’s wish her luck and success for the rest of her bright career. Fairy, we thank you deeply for agreeing to offer us this interview. This was a delight!

F: “Cheers to that!”
G: Cheers!
I never tried coffee before… I only had eyes for Berry Juices, but it would be a crime not to try Kalos’ coffee while I am there!
F: “Do you like it?”
… 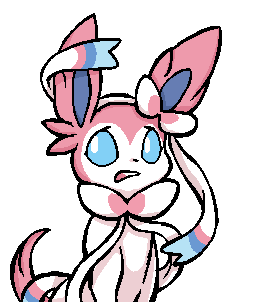 G: … OH MY GOSH! THIS IS DIVINE! COFFEE IS THE BEST THING ARCEUS EVER CREATED!
WHERE IS THE CENTER OF THE UNIVERSE!? WHEREVER THERE IS COFFEE!!!

F: “… Let’s take a short break.”
G: Sorry everyone for this… outburst. I didn’t expect this fine drink to trigger such a reaction in me. Thank you again, Fairy, for your time…
F: “I wanted you to have this gift as thanks for coming here and giving me an interview.”
G: How kind of you… thank you very much, Fairy! I will make sure to give you something big for your upcoming birthday!

G: And that’s it for today, everyone! If you are in Kalos, or in front of your screen, in need of help, you now know where to find it! See you later, for our next interview! Stay tuned! And if you’re interested in taking part in an interview – or being the interviewer – let us know in the comments!

Artwork by Fairy.
Edited by Arcaneum and bobandbill.