Pokémon Legends: Arceus currently offers a lot of ways for Shiny hunters to find their targets. Here we cover the main things you need to know about Shiny hunting Pokémon in the newest Sinnoh titles!

As with previous games, the base rate for a Pokémon to be Shiny (have a different colour than usual, and a sparkle effect when entering a battle) is 1 in 4096. This can be increased for each individual species to ~1 in 2048 (or alternatively, two “rolls” at the regular Shiny chance) by getting their Research Level to 10 – something that’s pretty easy to do for most! If you go above and beyond and get a “Perfect” Research (complete all requirements for that Pokémon), then you get four rolls at the base chance, or a Shiny rate of 1 in 1024.38.

Happily, unlike in Pokémon Brilliant Diamond and Shining Pearl, the Shiny Charm item gives three extra Shiny rolls. This can be obtained once you get the Research Level to 10 for every Pokémon. This item combined with the Research Level bonus starts to build things up! A Perfect Research rating with Shiny Charm gives you a rate of 1 in 585.57, or 7 Shiny rolls, for that species.

Here are the revised shiny rates for the new patch! pic.twitter.com/f72T350lzX

That’s not all though. Mass Outbreaks, which can occur at random, give a whopping 25 extra rolls! In the most optimal conditions, you can get a Shiny rate of better than 1 in 129. Even without any of the other bonuses though, they’re worth checking out – a 1 in 158.02 chance is fairly good. In-between those are the new (as of version 1.1.0) Massive Mass Outbreaks, which grant 12 extra rolls, so the chances here range from 1 in 315.54 to 1 in 216.05. 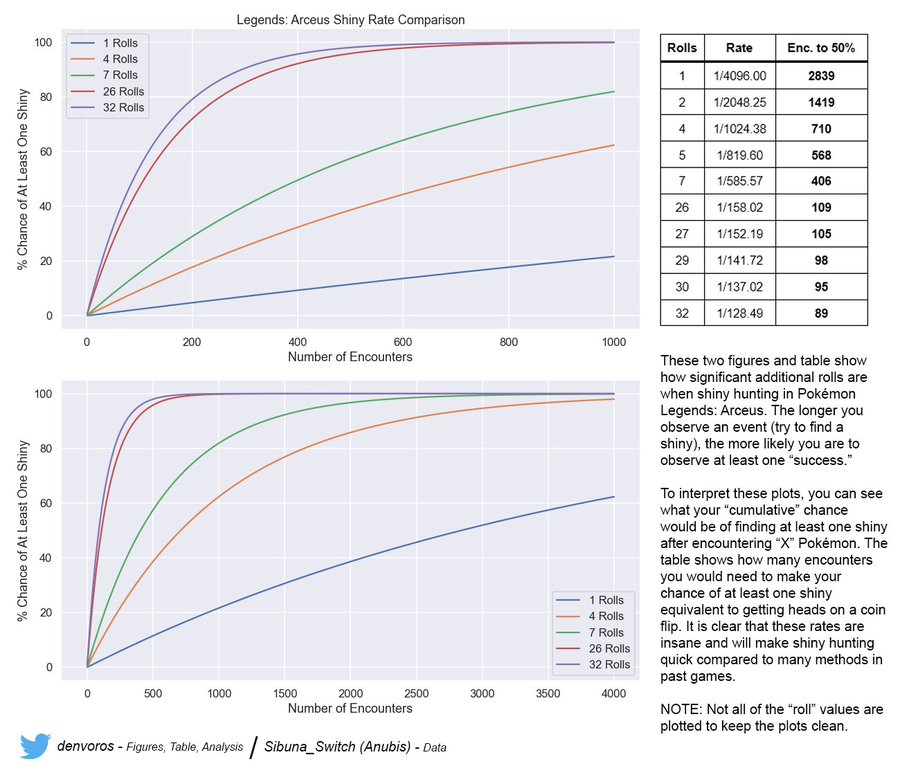 The above graph gives you a good idea of how impactful getting the Shiny Charm and Research levels can be, as well as Mass Outbreaks. Check the Twitter thread below by Denvoros for further details. Your chance for one Shiny goes up with encounters – without a boost, you need thousands to have a decent chance at a Shiny, but with 7 rolls, you need less than 1000.

The Shiny Rates for #LegendsArceus were determined this morning, so I figured I would make a few charts and run some math to show how insane they really are.

What can’t be Shiny

All static encounters in the game are “Shinylocked” – they can not be caught or obtained in their Shiny forms. This means the Starters at the beginning of the game, Legendaries and Mythicals, and any forced encounters from Side Quests cannot be Shiny. The one exception is a Ponyta from a side quest, which is forced to be Shiny.

Shiny Pokémon appear the moment they are encountered – no need to battle or catch them first.

As mentioned above, the best chance for hunting Shinies is in Mass Outbreaks (and similarly Massive Mass Outbreaks). These appear at random once you have progressed the story, and last for around 15 minutes at most. When you enter the zone, the Mass Outbreak will not end for as long as you are hunting Pokémon. Bring your Poké Balls!

You can save once you see a Shiny, and if it flees or faints, you can reload your save file, and it will respawn. This won’t work in Mass Outbreaks or Void Disruption areas, however – the seed is set once you enter the area for Mass Outbreaks, and Void Disruptions will just outright disappear.

The following worked prior to version 1.1.0 – this will not work for newer versions (but you will not access to Massive Mass Outbreaks). Mass Outbreaks disappear when you save and reload the game now.

Note that not all Pokémon can appear in a Mass Outbreak; and some Pokémon only appear in Void Disruptions.

A Shiny sound effect will play when in range of a Shiny Pokémon, even if you haven’t spotted it on your screen yet. Therefore, as soon as you hear it, save your game, and then try to catch it! If you wipe out, you can go back and still find the Shiny as long as you do not leave the map. (Leaving the whole map will reset all encounters as well.)

Lastly, if the Pokémon species is time dependent (e.g. Beautifly during the day), and you encounter its Shiny, you can save before interacting with it (it noticing you, throwing anything at it, etc.), go back to a campsite and sleep to change the time, and return to find the “replacement” species (in this case Dustox at night) as a Shiny in its place.

I managed to change this shiny Murkrow (night spawn) into a shiny Glameow (day spawn).

I found it at night, saved far away from it, rebooted the game, rested until day, then went back to the Pokémon.

Repeating the process for day to night changed it back into Murkrow! pic.twitter.com/KnoKYXysQY

Let us know what Shiny Pokémon you want to find in Pokémon Legends: Arceus!

Thanks to Anubis and Denvoros for the rates and analysis.
Edited by Sheep.