There’s often been a humanoid ‘mascot’ Pokémon in each generation of late that has received more attention, more marketing, by The Pokémon Company (International), to pretty good success. The fourth generation gave us Lucario, the poster child for generation four. It was the focus of one of the movies, a gift Pokémon in the form of Riolu in Pokémon Diamond and Pearl, became a Super Smash Bros. playable character, and has continued to be popular since. This was helped by it receiving a Mega Evolution, and a fighter slot in Pokkén Tournament. It is currently part of Ash’s team in the anime, and firmly in mascot territory, likely for the rest of the Pokémon franchise’s future.

Zoroark was the designated slot for generation five, and while not quite as successful as Lucario as a mascot, it was clearly given special focus in its in-game event, use as the first generation five Pokémon reveal, and also promotion in a movie. Generation six meanwhile gave us Greninja, which has proven itself as the most popular Pokémon in the last two yearly official popularity polls. Generation seven presented Zeraora as a rather popular mythical Pokémon, although Incineroar was fairly well used in battles and gained a fair bit of popularity through its Hidden Ability (Intimidate) alone.

This brings us to the current generation, started by Pokémon Sword and Shield. The generation is still fairly young, and we have a few contenders for the position here. All of the Starters are humanoid, although Cinderace seems to be the most popular of these. It earned a spot in Go’s team in the current season of the anime, and shot up in competitive battling usage once its Hidden Ability was released. It has even been used as a soccer mascot.

Undoubtedly, however, Toxtricity was at least intended as a representative choice here, if not the choice. It is given out as a gift Toxel in the hard-to-miss Daycare, is showcased in the closing credits, was seen as a mysterious statue by the lighthouse in-game, and stands out in having two different forms. And later this month, its Shiny form will be distributed in an event via serial code.

Furthermore, it even has a unique Gigantamax form – but oddly, rather than being available from launch, its G-max form was released through a Max Raid event. And this is what seems so weird about Toxtricity – despite all that going for it, it’s not proven to be quite as popular as other Pokémon, and not so strongly promoted outside of the main series games. It’s yet to debut in the anime, for instance.

Why would this be then? Did it not quite get as much attention as expected, and so they’ve dropped it?

No, rather, it seems that it had been planned to be a bigger deal from the beginning, only for changes to be made during development.

Hidden in the hills – and posters

Game Freak have sometimes teased future generation games in earlier titles. An obvious example is the mysterious statue item you can get from an NPC in Pokémon X and Y, that was a reference to the Alolan setting for the generation seven games. It turns out that we got a sneak peek at Toxtricity in an easily missable poster in the Game Freak office in Pokémon Sun and Moon!

Neat discovery I've done tonight, we had a sneak peek of the Gigantamax mechanic on Ultra Sun and Ultra Moon as an easter egg! This poster in the Game Freak's office in Heahea City features presumably Gigantamax Toxtricity! pic.twitter.com/hZIHIvbCT5

These games released three years before Pokémon Sword and Shield did – that’s a long time before release, and likely early in development. Toxtricity was set up way in advance. A neat touch too is that the other posters seen appear to include references to new versions of the Kanto birds, which only appeared in the DLC Expansion Pass a year later. 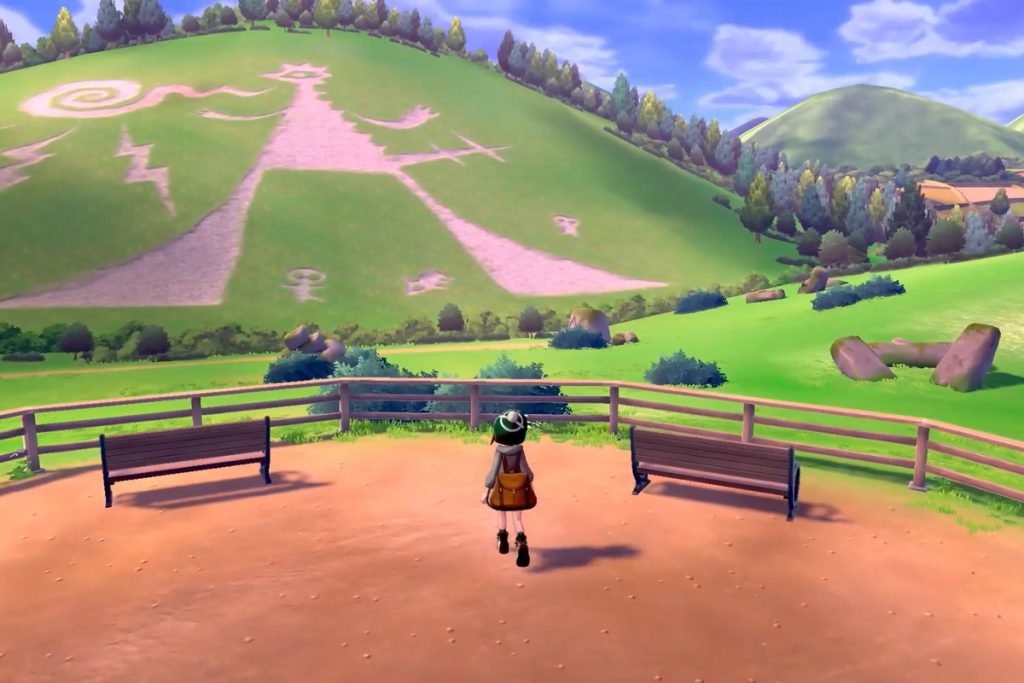 So, it’s clear Toxtricity was planned early in Pokémon Sword and Shield’s development. That in itself doesn’t mean it was important. For example, beta versions of Shellos are known to exist in Pokémon Ruby and Sapphire files. However, outside the town of Turffield lies a large geoglyph of a giant Pokémon, etched into the grass. During pre-release some fans speculated it was a reference to Meltan and Melmetal – but now it is clearer that, given the tail pattern, that it is a reference to Toxtricity’s G-max form. The game makes a fair bit of focus about this area – firstly, with the camera panning and a rare sidequest around the area, and secondly with Sonia showing up. Sonia talks about the Darkest Day as you gaze on the geoglyph.

Why would so much focus be placed here on a representation of a form that only appeared in a limited time event available after launch? It only makes sense that Toxtricity was meant to have more focus here, and its Gigantamax form to have some relation to the previous Darkest Day event. This is further evident in the statue by the lighthouse by Hulbury, of the two Toxtricity forms, dedicated to defenders of the location (perhaps during the Darkest Day). Of all the Pokémon in the game to make statues of, which players will surely notice as they search for Nessa outside of her Gym, they chose Toxtricity. The game is actively reminding the player about the Pokémon.

Late last year, even more discoveries were made related to Toxtricity and the Darkest Day plotline. That’s right – there’s more.

Among many of the leaks of prototype or beta builds of main series Pokémon titles last year was this set for Pokémon Sword and Shield. In Route 7 of the final game is a bridge in front of a rather boring mountain, which the camera focuses on as you walk by it. This is somewhat odd, coupled with the fact it’s during a part of the game you are rushing to help out with a Dynamaxing Pokémon problem, only to find out once you get there that Leon has already saved the day.

Turns out, you may have been meant to fight this yourself.

Suddenly the camera focus on this featureless cliffside makes sense – there’s meant to be a Dynamaxed Pokémon here! And it rather resembles what can be described as a rough, early model of Dynamaxed – or Gigantamaxed – Toxtricity. This ties into the earlier hints of this form – the engraving of it into a hillside, and the statues of it, combined with gifting the player the baby form. This would have made for a more interesting and involving narrative, to have the player fight this ‘miniboss’ of sorts between Gyms as the threat of a returning Darkest Day event loomed. It also would have involved Sonia more – she was looking at the geoglyph in a cutscene after all, but its contents never get mentioned again.

Unfortunately, the end result was a rather rushed plot, and a lack of connection between the earlier sightings and hints and Toxtricity’s Gigantamax form. Its unique form was instead relegated to a post-launch event with no direct sighting before it. Furthermore, this aspect of Toxtricity was not picked up in the Pokémon Sword and Shield Expansion Pass (or DLC), with the focus shifted to new stories and other Pokémon instead.

One possible theory is a rushed development. Much has already supported this, from the Pokédex cut to the underwhelming graphics and reused animations and models from previous generation games. Perhaps the development team were unable to come up with a way to implement its battle into the story, or lacked the time to include it and all the other necessary story beats to give a fully fleshed story. They didn’t outright cut Toxtricity’s Gigantamax form after all, and left in the other touches and references to it – they just didn’t commit fully to its promotion.

Sadly for Toxtricity, it was initially planned to be a bigger deal than what it turned out to be. It’s still fairly popular, but one does wonder to what extent its popularity could have reached.

What are your thoughts on Toxtricity? Are you a fan, or do you prefer other humanoid Pokémon from Galar? What would you have changed about the story in Pokémon Sword and Shield?

Thanks to /u/cannibalisticapple’s post, made before the beta findings to boot – kudos!
Edited by Aldo and Corviknight.