Hey hey, Trainers! Today I write to you with the news everyone has been waiting for. Millions of Trainers have been looking for methods to defeat one of the greatest threats in today’s Pokémon metagame, Greedent. Unfortunately, I cannot truthfully provide an answer to this question, as Greedent is possibly one of the most threatening Pokémon to date. In fact, Greedent is so centralizing to the Pokémon Sword and Shield competitive scene that people have been bringing checks SPECIFICALLY for enemy Greedent since the very first day the game came out and some people even bring them subconsciously. Yes, Greedent is so powerful that people are prepared for it without even once thinking about it.

There is a much better solution, however. You can always bring your own Greedent. After many years of research, I’ve conducted experiments that will bring about the best Greedent strategies possible. As usual, we’ll be looking at sets, builds, and ideas for Greedent as well as providing general information on how to properly utilize its many boons… 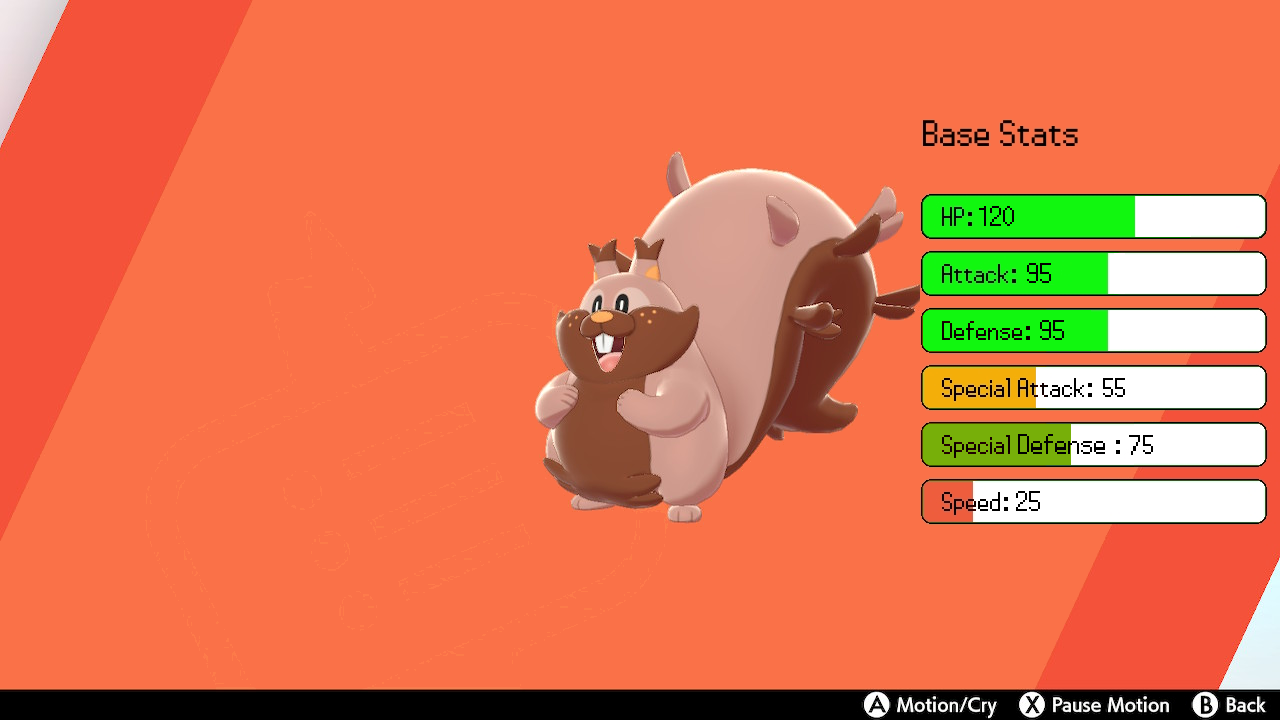 A newcomer to the Pokémon franchise, this cheeky rodent comes packed with an enormous base 120 HP and 95 Defense, making it incredibly hard to faint on the Physical end. A base 95 Attack stat is comparable to the likes of legendary Pokémon such as Zygarde while also just barely losing to a Deoxys-Attack with no Attack investment, trading the slightly lesser offenses for much greater bulk and Abilities. It also comes with a low, but reliable base Speed stat of at least 20, which is higher than 19.

Greedent’s defensive capabilities are heavily emboldened by its lack of type weaknesses. In fact, if you do the math, if one were to remove all Fighting-type attacks from the game, Greedent would not have any weaknesses at all.

Restores 33% of Maximum HP when the Pokémon eats a Berry.

Greedent’s signature Ability. No other Pokemon can have this Ability, and for good reason. If you do the math, Berries account for a big percentage of all items (what percent that is, I cannot say, but I know there is more than 3 kinds of Berries) which means Greedent has many many possible Berry combos, drastically boosting its utility as well as making it extremely unpredictable. Being able to heal as well as use the initial effect of its Berry at the same time can be overwhelming even for the player using Greedent.

Makes the Pokémon eat certain held Berries early when its HP drops to half or less.

Greedent’s pre-evolution, Skwovet, can be found as early as the very first route which simply adds to Greedent’s reliability due to being so accessible compared to other Pokémon. Legendary Pokémon such as Zacian and Zamazenta, while powerful, can only be obtained once and are locked behind different games. Other powerful metagame threats, such as Milotic, are extremely rare in the wild to offset their overall strengths and remain exotic to players.

By sheer supply and demand, Greedent as a whole is the complete antithesis to Pokémon Sword and Shield’s game balance and speaks volumes of Gamefreak’s inability to craft well balanced templates for its lovely playerbase and thus create a fun metagame for all players. In fact, when shaking Berry trees for EV training, sometimes a Greedent will swoop in to steal your loot to simply remind the player that there is no reason to train anything else besides a Greedent if you don’t already have one. It’s a practical joke, and they aren’t even being subtle about it. Shame on you, Gamefreak. I hate you.

Greedent truly shines in Doubles. This is because two heads are better than one. Although still effective in Singles, the ability to support and maintain your Greedent with an ally allows it to destroy your opponent’s Pokemon uncontested and utilize much more creative strategies that are simply not possible in Singles. However, if you wish to go forward using Greedent in all formats, the sets provided still work in Single battles.

By utilizing team support, your opponent will constantly have to take Greedent into account at the team preview screen as well as in battle. For example, a good supporting team for Greedent would be Whimsicott, Dragapult, Milotic, Conkeldurr, and Excadrill. The strategy with this team begins at team preview, as I mentioned before. Utilize Greedent by choosing any combination of the other five Pokemon instead.

Checkmate Greedent, coined by the creator of Chess himself, is named as such due to putting your opponent in a surefire losing position if the correct conditions have been made. What specific conditions are required to pull off the infamous ‘Greedentmate’ I will not say, but losing with this Greedent set simply means you didn’t meet them.

The strategy with this set is to have your ally Pokémon divert attention from Greedent and allow it to set-up Stockpile, which will raise both of its defenses by 1 stage. After either setting up Stockpile three times or taking a bit too much damage, use its signature move, Stuff Cheeks, to instantly eat its Starf Berry, sharply raise its Defense stat, and roll the dice. Starf Berry raises a random stat of the user by two stages upon reaching 25%, but Stuff Cheeks not only lets you activate this Berry whenever you want AND sharply raise your Defense stat, but it additionally triggers Cheek Pouch to heal 33% of its max Health!

At this point, the ‘Greedentmate’ is done, and it only took 4 turns of set-up and a ridiculous amount of team support. Nothing can feasibly KO Greedent at this point beyond critical hits, which is okay because you can then blame the game. Also, having to lean on critical hits to even hurt Greedent in a way that matters is very unreliable. Greedent’s only weakness to the primarily physical Fighting-type attacks will do nothing due to Stuff Cheeks giving you an instant +2 Defense without needing to rely on Starf Berry. In the end, Greedent at the very least gains 5 boosts to Defense, 3 boosts to Special Defense, and 2 boosts to a random stat.

After all that’s done, you can then sweep your opponent using Body Press, a Fighting-type move with a base power of 80 that scales entirely off of Greedent’s Defense stat. Being rewarded with damage for bulking up seems rather silly, but everything is fair game as long as the option is available, and Body Press is no exception. After hitting Defense stats in the hundreds or thousands, Body Press will take no survivors. In fact, the only Pokémon that CAN survive are Ghost-type Pokémon which are already dead anyway, so this set technically has no living counters.

The last slot is a toss up between Rest and Brutal Swing, which comes down to preference. Rest is the most reliable healing move in the game. It protects you from status as well as heals you to full health, it puts you to sleep so it removes bad status you already have, and it provides a good fail-safe for newer Greedent players who have not mastered the art of playing around Greedent’s defenses.

Brutal Swing is a good move. It’s a base 60 Dark-type move that hits both opponents, allowing Greedent to hurt two things at once. It’s also very good in Pokémon Mystery Dungeon: Rescue Team Deluxe (PMDX). Because moves in PMDX are shared throughout your entire game, upgrading one move upgrades it for your entire Rescue Team. If you just pump millions of Accuracy Drinks and Power Drinks into Brutal Swing, and then teach all your Pokémon Brutal Swing, it becomes one of the most overpowered moves in the game. This is because Brutal Swing hits two tiles long all around the user and is the only move of its kind to do that. It’s like having Quick Attack in an area of effect, and you can easily clear the entire game by simply spamming Brutal Swing. It even starts off with 16 PP, which means it will very rarely run out of usage before PP ups. Full screen moves such as Silver Wind are good, but they cannot be reliably used in corridors or other tight corners and spaces. However, Brutal Swing can catch enemy Pokémon in areas no other move can, and it is completely unimpeded by terrain or other Pokémon. I recommend running Cubone as your starting Pokémon simply because it starts off with Brutal Swing. Brutal Swing.

Greedent has no builds that compare to Checkmate Greedent, so don’t bother trying anything else. Of course, there are lot of supporting Pokémon that can help embolden Greedent’s normal game-plan. For example, both forms of Indeedee are extremely viable support Pokémon that can take advantage of Greedent’s incredible stat-boosting prowess.

Greedent needs a lot of time to set up a win. Female Indeedee can utilize its vast support movepool to keep Greedent alive by using Follow Me to redirect all attention from Greedent. She also protects Greedent from Prankster Taunt users, such as Grimmsnarl or Whimsicott, with its Ability Psychic Surge. Light Screen and Reflect practically ensure Greedent’s survival from everything and Heal Pulse allows Indeedee to keep Greedent very healthy in the case it takes a bad hit while setting up.

Male Indeedee takes a much different approach than Female Indeedee. This Indeedee utilizes Psych Up to copy Greedent’s stats boosts and blast the enemy with Stored Power, which rises by 20 base power for each stat boost on the user. Assuming Greedent is all set-up, Stored Power’s base power is 200 before STAB. If your opponent wasn’t already losing to Greedent, they will surely lose to Indeedee.

Of course, since you cannot bring both Indeedee to the same fight, Pokémon that can replace the each of these roles are needed. Togekiss and Clefable can still use Follow Me for redirection purposes and Shadow Tag Gothitelle can use Psyche Up while possibly locking your opponent into a bad match-up and letting Greedent set up for free.

Counters to Watch For

Greedent is extremely vulnerable to human error. Behind a mediocre player, it cannot be played to its full potential. If you once again do the math, the common factor behind every losing Greedent is a human player. Therefore, the one using Greedent need only to prepare for themself rather than their opponent. Think very carefully before bringing Greedent to a battle. Think to yourself not “Is this a good pick versus my opponent?” but rather “How can I defeat my opponent if I can’t even defeat myself?”

I understand that this all hits very close to home. I’m here for you. I want to help. Setting a path to victory requires more than intellect and ingenuity. You will face many losses and regret ever learning to play competitively in the first place. This is normal. This happens to everyone. Nobody becomes a champion overnight. It’s okay. It can get better. There is a solution.

I recommend Street Fighter legend Daigo Umehara’s book, “The Will to Keep Winning”. Although the mechanics of RPGs such as Pokémon Sword and Shield and Fighting Games such as Street Fighter or Tekken greatly differ, the advice given by Umehara reflects the mentality of competitive gaming champions regardless of genre. Truly inspirational.

With many Pokémon cut from the Pokédex, Greedent is currently the strongest Route 1 Normal-type Pokémon in the game but even if the others were available, Greedent would definitely still come out on top. Although building against Greedent can be extremely difficult, this guide should highlight that the intuitive solution is simply bringing your own. Hopefully, the numerous sets above will help you gain the ladder points you need to hit the Master Ball tier online!

Thank you all for reading, and I hope you all continue to excel in your Pokémon adventures! Until next time, everyone! Farewell!~

Edited by bobandbill and Siddhar.