Ryota Otsubo from Japan won the Masters rank of VGC at the 2017 edition of the Pokémon World Championships. Meanwhile, Worlds 2018 has been announced to be held at Nashville.

It's official! The 2018 Pokémon World Championships will be held in Nashville, TN! #PlayPokemon pic.twitter.com/OStZFRV33d

Other winners are as follows: 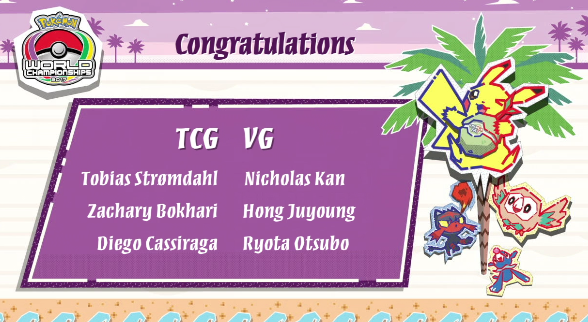 Nicholas was the favourite following a very strong year, and with the help of a team built by his brother. He took the Finals in a 2-0 victory, albeit with some luck in the second match helping him out (a missed Rock Slide and two missed Leech Seeds, with a lack of Flinches suffered from Tomás’ imposing Gigalith). Intimidate helped him reduce damage from the physical attackers on both sides, along with Z-Moves from his Gyarados to take early KOs on Hariyama and Oranguru in the first and second match respectively.

Yuki would be cursing Muddy Water’s accuracy from the first match; the attack missed Arcanine three times, although did at least lower the accuracy of its partner Pokémon thrice. However, a great predict wiped out a switched-in Mudsdale, and Tapu Fini repeatedly Protected against attacks from Hong’s Porygon2. Another smart switch-in kept Yuki’s Tapu Fini alive while saving his Kartana to sweep later. A key 1-HP survival from Tapu Fini then let it knock out Porygon2.

Hong changed his side in response and brought in Araquanid as a bulky hard-hitter with its Water-type attacks. Yuki’s Porygon2 showed up in this battle and survived with 1 HP, and finally hit Arcanine with a critical hit Muddy Water. It looks like a poor turn until Araquanid used Bug Bite to steal Tapu Fini’s berry. He started to come back and knocking out Kartana allowed him to come back with Araquanid and Mudsdale. A clutch double-Protect helped turn it around.

The final round started with a Nature Madness miss from Tapu Koko on Hong’s side, but it hung in thanks to its Assault Vest. Hong’s Porygon2 then survived long enough to use Trick Room which helped his Mudsdale take over with two important KOs. The speed control only showed up in the last match, but it proved to be the difference.

The first match was won by Sam Pandelis from Australia, who sacrificed his Ninetales to set up Aurora Veil. A Swords Dance and Z-Move from Garchomp removed Ryoka’s Alolan Marowak, which allowed a boosted Xurkitree to eventually sweep to victory. The Aurora Veil was key to keeping Sam’s Pokémon alive.

The second match Ryoka adjusted his strategy, and come the midgame pulled off two crucial Brick Break attacks to bring down Aurora Veil along with Ninetales. Nature Power from Whimsicott then was able to pick off the Xurkitree and pave the way to victory. It came close; Garchomp pulled off a Z-Move against Tapu Fini to knock it out. A Tail Wind helped Marowak hurt the Garchomp with a Shadow Bone attack, and then predict a Protect on Garchomp to take out Mandibuzz.

At 1-1 it came down to the deciding third match. Sam opened with Garchomp and Ninetales, while Ryota had Whimsicott and Alolan Marowak. Sam started stronger, by predicting that Whimsicott would use its Z-Move through Nature Power on Garchomp while Tapu Fini was switched in, and responded by switching in his Mandibuzz. It rendered it useless as Dark-types negate all moves which benefit from Prankster! He meanwhile got Aurora Veil set up. While Ryota set up a Tailwind the following turn, Icy Wind helped give Sam some temporary speed control.

However, Ryota soon started to turn it around. He wore down Sam’s duo of Mandibuzz (who unfortunately picked the wrong slow to use Foul Play and hit the switched-in Tapu Koko rather than Alolan Marowak) and Ninetales. Ryota was able to then set up a second Tailwind and bring down Whimsicott’s counter in Mandibuzz, and then crucially made the prediction of the round – Garchomp using Protect and Xurkitree attacking with a Tail Glow boost. A double Moonblast was able to bring it down from full HP.

Afterwards it was a simple sweep against the remaining Ninetales and Garchomp, the latter which had no hope against the speed-boosted Fairy types.