The third Pokémon Sun and Moon Global mission has now begun! Players have two weeks (until February 14, 2017, at 00:00 UTC) to hit the goal of one million trades through the Global Trade System (GTS). 2,000 or 4,000 Festival Coins (depending on if you have a Global Link account) are at stake. You could also win a Friend Ball.

If everyone teams up to make 1 million trades at the GTS, you’ll receive 2,000 Festival Coins.

If you’ve signed up for a PGL account before the global mission ends and the global goal reaches 1 million trades at the GTS, you’ll receive 4,000 Festival Coins. But if 2 million trades are registered then the reward will also include a Friend Ball!

You don’t need to be a Pokémon Global Link member to participate in global missions, but as a bonus, players who have registered their Game Sync ID at the PGL will earn double the Festival Coins, and any PGL member who reports five or more trades will earn five Rare Candies!

Are you going to help everyone reach that goal? Do you think it’ll be the case of third time lucky with Global Missions? And perhaps most importantly, are you going to recreate the Magnemite Coil and trade Magnemite for Magnemite? 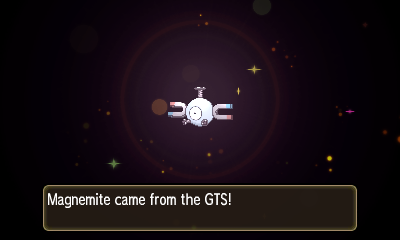