A new Pokémon was revealed at the 2016 World Pokémon Championships – say hello to Crabrawler in the trailer below! 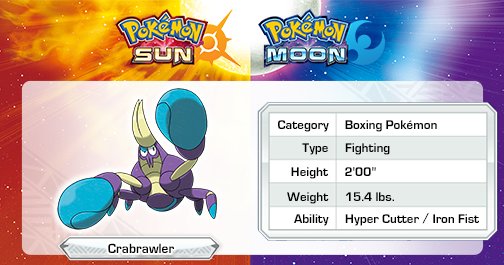 From the official webpage, we learn that Crabrawler, a pure Fighting Type, hates to lose. It fights to gain higher social standing and a higher position in its environment. It’s sometimes found clinging to tall people or to the walls of buildings!

Crabrawler’s favorite food is Berries. It punches the trunks of trees to give the branches a good shake and knock any ripe Berries to the ground. When Crabrawler gather around a tree, they fight it out to gain the privilege of eating the ripe Berries.

We’re also informed that “Crabrawler’s pincers are sometimes torn off during its bouts—and they are said to be delicious.” Hmm… 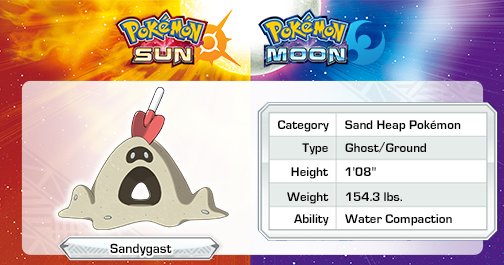 We get the English name for the Ghost/Ground types revealed in CoroCoro earlier this month. Sandygast emerges when the grudges of Pokémon and other creatures soak into the sand after they fall in battle – spooky!

And that’s not all:

If you heedlessly grab a Sandygast’s shovel, you’ll fall under the Pokémon’s control. A Sandygast uses its power to manipulate children into gathering sand to increase the size of its body. If a Sandygast loses its shovel, it may put up a tree branch, a flag, or another item in its place. These Sandygast are wanderers in search of their own shovels.

The tunnel-like mouth of a Sandygast can suck the vitality from people and Pokémon. Apparently it’s a test of courage in the Alola region to put your hand in a Sandygast’s mouth.

Sandygast has the new Water Compaction Ability, Its Defense stat will go up by two stages if it’s hit with a Water-type move. 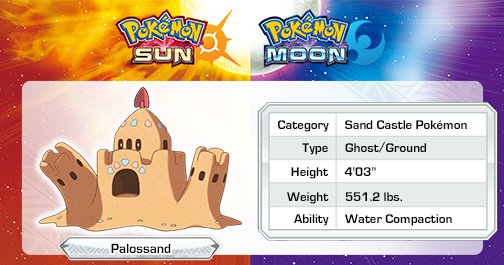 Palossand is the evolution of Sandygast. It has the same unique Ability in Water Compaction. This stronger form controls human adults, making them build a sand castle that provides camouflage and also raises its defensive abilities. Unlike Sandygast, if Palossand loses some of the sand from its body, it can restore itself on its own.

When moving about in search of prey, the shovel on top of Palossand’s head revolves. It’s said that the shovel could be serving as some kind of radar.

Palossand loves the vitality of Pokémon and drags small Pokémon into its body so it can steal their life force. You may want to stay away from the beaches of Alola in Sun and Moon… 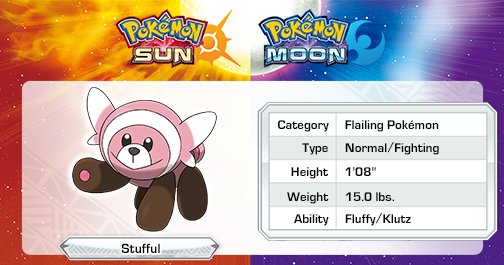 Stufful is far less creepy, and is regarded as a fairly cute and popular Pokémon. It does hate being hugged (unlike its evolution Bewear which loves giving hugs!), and flails its arms if you try to cuddle it. That may be dangerous to do as it’s apparently still very strong, but it sure looks cute.

What do you think of this newest batch of information? Let us know in the comments!