With E3’s Pokémon segment having just concluded, we have been treated to a lot of exciting news. Included in this news was the introduction of three new Pokémon: Yungoos, Pikipek and Grubbin.

The first of the three new Pokémon we were introduced to, Yungoos continues the trend of small Normal-typed Pokémon introduced early during the game. 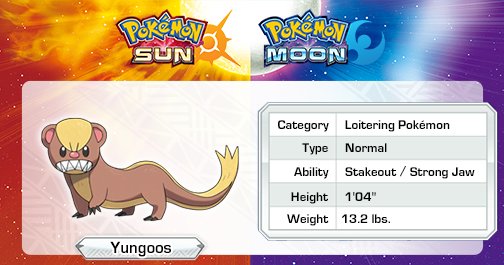 Yungoos is described as the Loitering Pokémon and possesses the ability Strong Jaw as well as the brand new ability Stakeout. Strong Jaw is an ability that increases the power of biting moves like Crunch or Thunder Fang whilst Stakeout allows Yungoos to do double damage to Pokémon switching in or out in the midst of battle.

Supposedly Yungoose is not native to the Alola region but was introduced to help control the explosive population of another Pokémon. This helps provides further support for the possible theme of Conservation in Sun and Moon as does its likely basis on the real life mongoose some species of which, such as the Giant-Striped Mongoose, being endangered.

Yungoos is described as being all about food. It’s always looking for its next meal, has a terrible temper when hungry and has a powerful bite allowing it to eat just about anything.

Another trend we see continuing is the presence of a Normal/Flying bird Pokémon during the early routes. This time we are treated to Pikipek which has quite a unique design when compared to the other early birds. 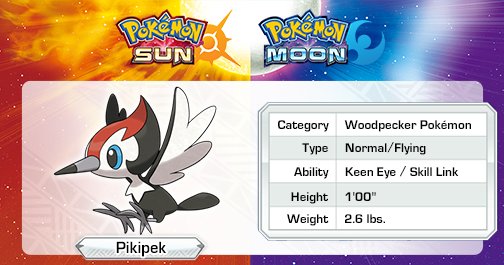 Pikipek is quite small and can possess the abilities Keen Eye and Skill Link. Keen Eye prevents other Pokémon from being able to lower Pikipek’s Accuracy stat whilst Skill Link ensures multi-hit moves like Fury Attack will always hit the maximum number of times. Considering this Pokémon’s real life counterpart is obviously the woodpecker, both abilities make a lot of sense.

Much like the high-speed pecking of their real world versions, Pikipek can strike a staggering sixteen times per second with powerful pecks that can dig deep holes into wood or even shatter stone. They have also been known to shoot seeds at distant foes, suggesting they can probably learn the multi-hit Bullet Seed. They are characterised as being attracted to shining objects.

Pikipek also continues the trend of being based on an endangered species, having an appearance and traits much like the Ivory-Billed Woodpecker found in North and Central America. This species is considered  critically endangered.

Last but not least is Grubbin, who, like the previous two Pokémon, continues a trend of a certain sort of Pokémon being common in the early routes of a region. In this case Grubbin fills the role of the early Bug type. 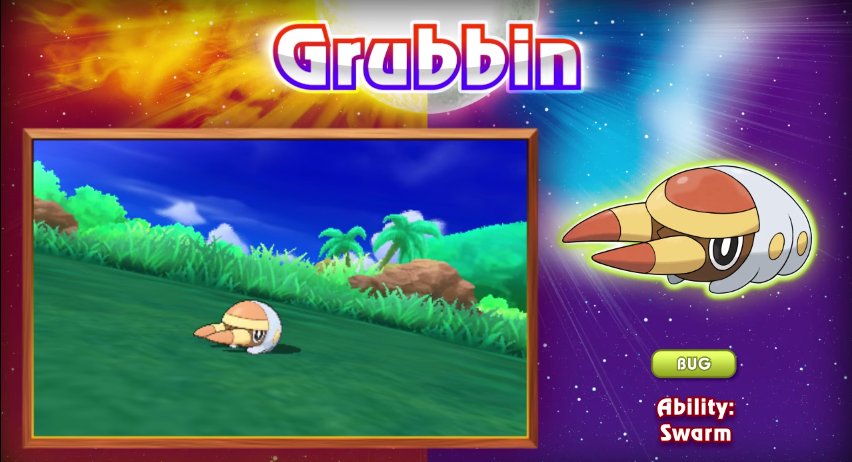 Grubbin is a purely Bug-typed Pokémon with the ability Swarm. This ability strengthens Bug moves when the possessor is low on Hit Points.

Interestingly, Grubbin is described as having a love for electricity and is often found near power plants and substations. This suggests that it may evolve to gain the Electric type in the future.

Grubbin’s powerful bite and relationship with electricity suggest it might be related to the Oriental Hornet. This insect, found in Asia and Africa, turns sunlight into an electrical charge and possesses a similar colour scheme to Grubbin.

It is hard to deduce a connection to the possible theme of conservation with Grubbin as there is little data available about the wild populations of the animal. However it could be tied in due to its relationship with solar energy and human experimentation.

Three wonderful new Pokémon have been revealed for Pokémon Sun and Moon and there’s probably many more on the way. Fans the world over wait with bated breath to see what else these new games have to bring.

Images from the offical Pokémon Sun and Moon website.