With the new Pokémon Scarlet and Violet games being scheduled for release in a little less than a month from now, new and veteran Pokémon players alike are excited to experience the new features, location, and Pokémon of the Paldea region, which are likely to change the dynamic of future Pokémon games.

For many players, Pokémon is a fun gaming experience that players enjoy in various ways, such as by completing the Pokédex, nicknaming all their Pokémon, Shiny hunting, playing through the story, and competitive battling. However, despite enjoying the many fun ways to play Pokémon games when embarking on an adventure, returning players may consider their overall Pokémon playthrough to be too easy or possibly even downright repetitive. Within the upcoming generation IX, your very own Pokémon legend is about to unfold in the Paldea region! A world of dreams and adventures with Pokémon awaits, but before you go, let’s consider five possible ways to improve your Pokémon playthrough in Pokémon Scarlet and Violet.

Play the game in “Set” mode rather than in “Shift” mode 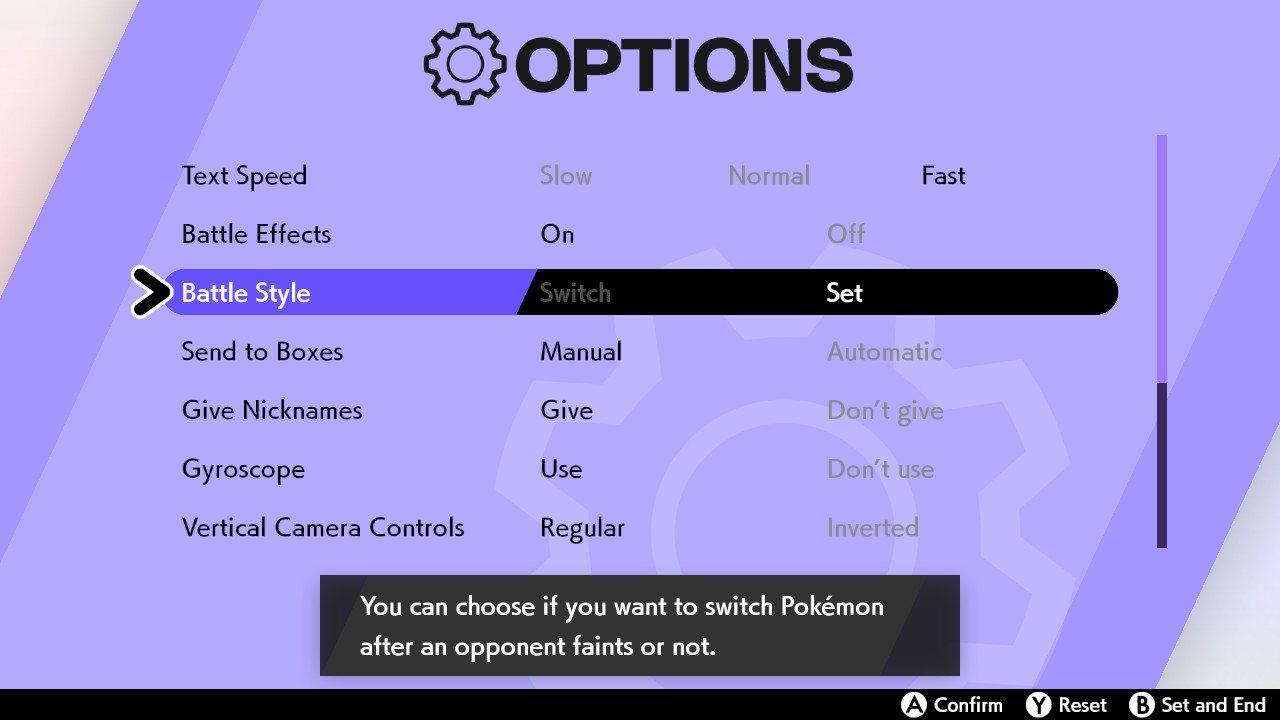 Within Set mode, the game removes the option to switch your Pokémon before your opponent sends out another Pokémon after you knock out his or her previous Pokémon. Playing Pokémon Scarlet and Violet completely within Set mode could grant additional benefits to improve gameplay, such as providing a greater challenge, improving your battling abilities should you ever challenge the game’s battle facilities or play Pokémon competitively, and providing each Pokémon in your party with individual attention when battling. To explain how Set mode offers a greater challenge, unlike Shift mode, it requires players to keep their Pokémon in battle until they switch them themselves during battle. This necessitates players to utilize more strategy to defeat their opponents. For example, if you are using Sprigatito and your opponent switches into a Fire-type Pokémon with a clear type advantage, you will be unable to switch your Sprigatito before your opponent does.

Instead, you must switch your Pokémon after your opponent switches, putting your newly switched-in Pokémon at risk of attack. Thus, Set mode requires players to be mindful of their decisions when battling, which could gradually increase your battling skills, and could be especially useful when competing in the battle facilities to grind for Battle Points (BP) or transitioning to competitive play where the gameplay is similar. Additionally, to further spice up the game in Set mode, battle without using items until after the battle. For example, instead of using a Full Restore or Max Revive to save your Pokémon from fainting or prevent you from losing the battle when its health is low, wait until after the battle to restore your Pokémon. Instead, during the battle, have your Pokémon hold items that they could use on their own, such as berries, as doing so would offer a more challenging yet fun experience when playing Pokémon.

Capture all possible Pokémon in your current location before proceeding 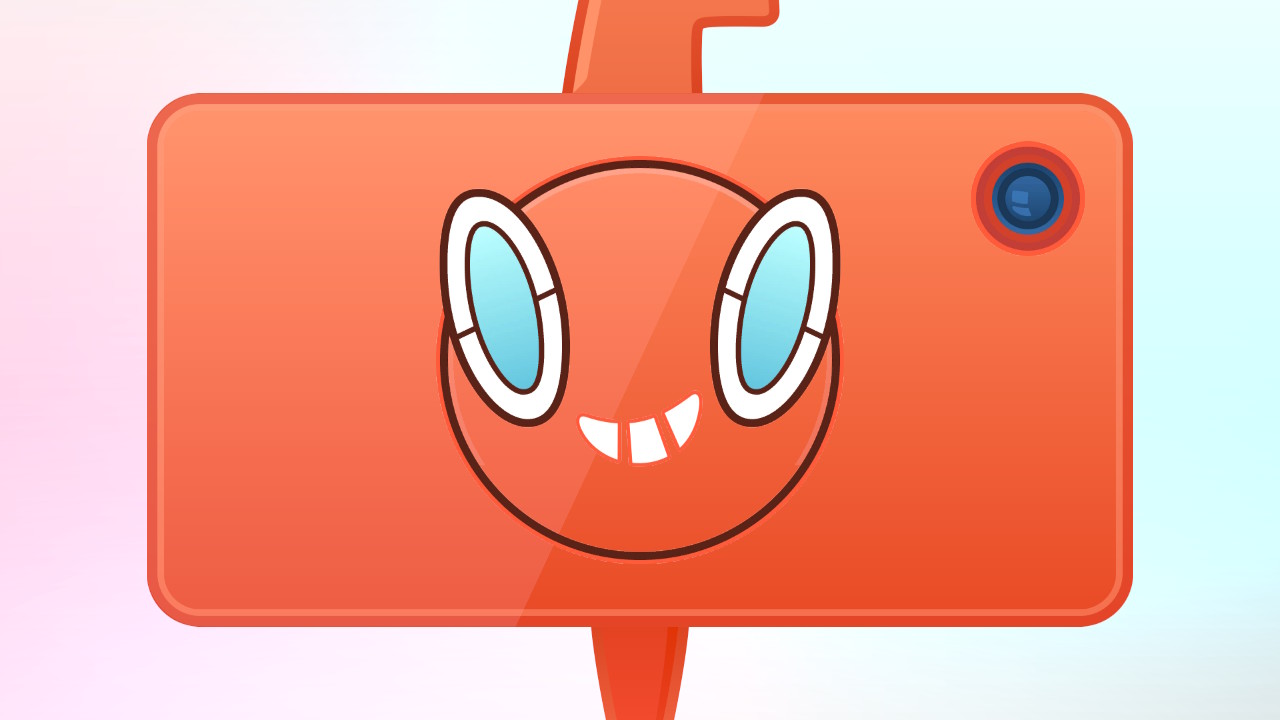 Catching every Pokémon within a specific location before proceeding to the next location offers many gameplay benefits, such as more playtime before completing the game’s story, bringing you closer to completing the Pokédex, providing players with an extra challenge, and providing the player with more Pokémon for potential breeding. The more Pokémon players have in their boxes, the more likely they will have a variety of different breeding partners for their current Pokémon and more potential to breed Pokémon with unique Egg Moves, which are moves that certain Pokémon can only or mostly learn through breeding. For example, if you are currently exploring an early route, before proceeding to the next route or town, catch every Pokémon that can be found within that location before proceeding. If necessary, use a guide that contains a list of every Pokémon that could be found within that location. Catching every possible Pokémon within your current location before proceeding to the next location also results in the player getting more acquainted with the different locations of the Paldea region and the Pokémon that reside in them. Additionally, if Pokémon Scarlet and Violet have quests similar to Pokémon Legends: Arceus, capturing more Pokémon could result in completing certain quests easier. For instance, in Pokémon Legends: Arceus, some quests require the player to allow certain NPCs to see, borrow, or have a certain Pokémon to complete the quest. If similar quests exist in Pokémon Scarlet and Violet, having more Pokémon in your boxes would therefore enhance your playthrough by making it easier. 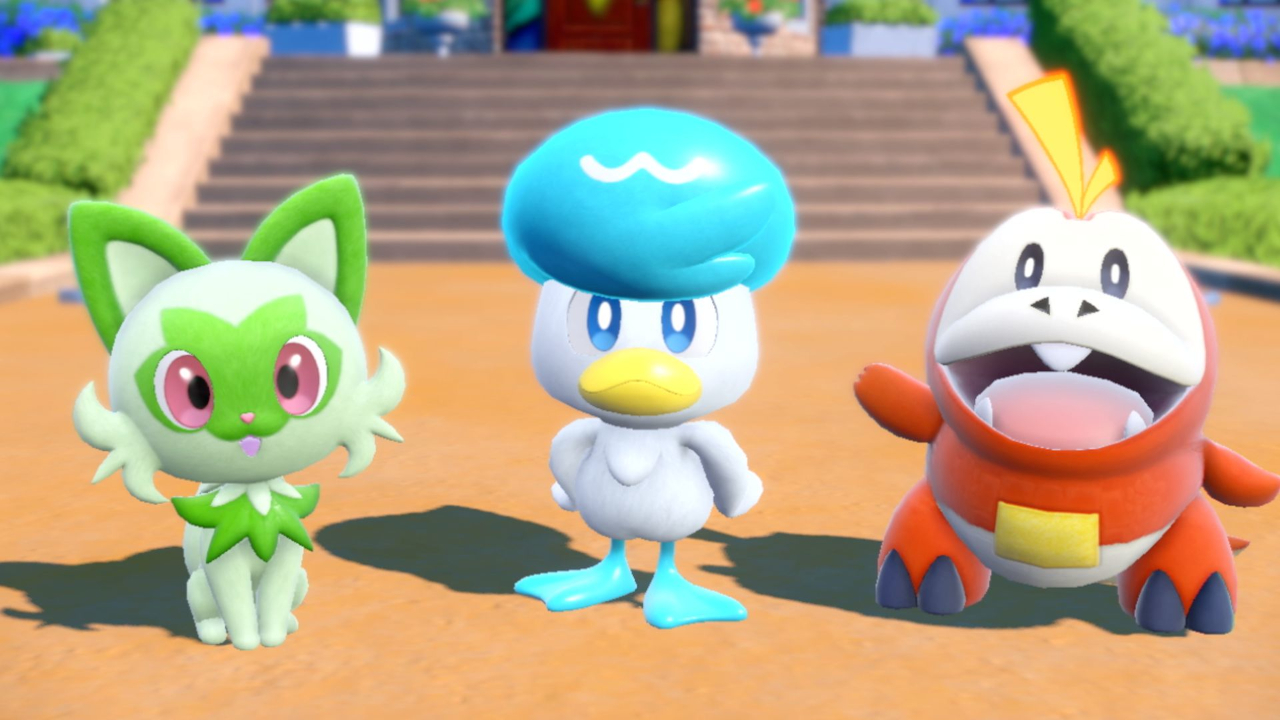 Although many casual players may not consider the option, breeding your Starter Pokémon early in your adventure actually provides players with many different benefits for their Pokémon playthrough, such as acquiring one with better stats, potentially useful Egg Moves, and having more trade fodder, which could be used to acquire the other Starters and/or other random Pokémon through Surprise Trade.

Female Starter Pokémon are necessary here because the Egg will hatch into the first-stage evolution of the female parent Pokémon’s evolutionary chain. When breeding your Starter Pokémon without Ditto, the possibility exists that if a parent Pokémon of any gender knows any specific Egg Moves that the baby can learn, the baby will inherit the moves upon hatching. Having a Starter Pokémon with Egg Moves early in your adventure enhances your playthrough by having your Starter know potentially powerful and/or useful moves early on. To fully maximize this possibility, you can transfer a Pokémon from a previous game with a powerful Egg Move to Pokémon Scarlet and Violet that shares the same Egg Group as your Starter. For example, if you chose a female Sprigatito and its Egg Group is “Grass,” select a Pokémon from your previous game from the same Egg Group, such as, for instance, Victreebel, with good IVs and a powerful Egg Move, such as Leaf Storm. Whenever you reach the Pokémon Nursery in Pokémon Scarlet and Violet, breed your Sprigatito with the Victreebel you chose. Doing this would hatch a Starter Pokémon with an extremely powerful Egg Move that it can use early in the game instead of when it reaches a high level. Breeding your Starter Pokémon without Ditto also results in the offspring inheriting either its male or female parent’s Poké Ball, granting the player the chance to have it in a Poké Ball different from the standard Poké Ball for aesthetic purposes.

Additionally, having multiple instances of your Starter Pokémon in your boxes could also improve the quality of your playthrough. For instance, because Starter Pokémon are often in high demand, especially during the early portions of a playthrough, you could trade your multiple Starter Pokémon for the other Starters you did not choose and other valuable Pokémon, as well as trade randomly with the Surprise Trade feature, which could result in you receiving more Pokémon and possibly valuable and helpful items. Doing this allows you to finish the game with a potentially stronger Starter Pokémon in any possible Poké Ball of your choice with powerful Egg Moves that can help you overwhelm the competition, which definitely enhances your Pokémon playthrough.

Use more than one Pokémon team throughout your adventure 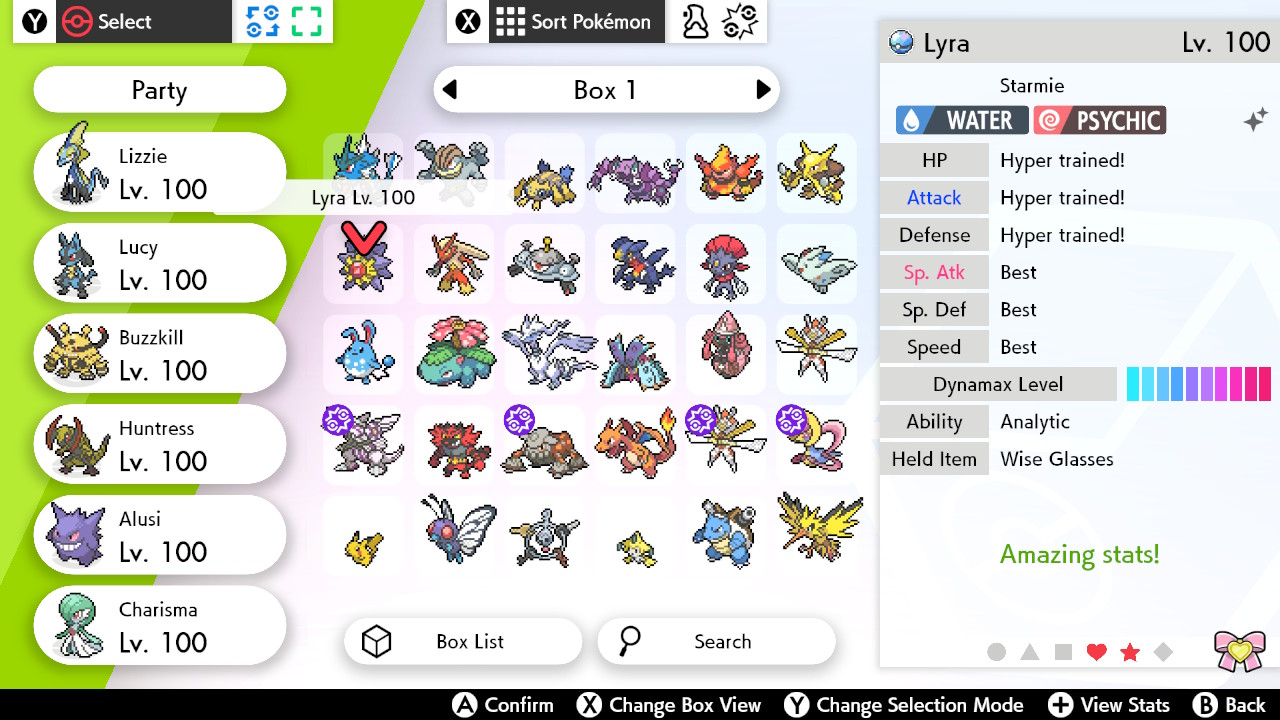 After defeating the second gym, box your secondary team, recall your primary team to your party, level up your primary team until they catch up with the secondary team’s levels, and repeat this process until you challenge the Elite Four. At this point, this would result in you challenging the Elite Four with your primary team. After defeating the Elite Four and Champion, challenge the Elite Four again with your secondary team. As a result, both your primary and secondary Pokémon teams would be champions, allowing you to maximize your playthrough experience with even more of your favorite Pokémon. Additionally, the possibility exists that you can use more than a primary and secondary team during your playthrough, which could allow you to train as many of the newer Pokémon as possible. Moreover, Pokémon Scarlet and Violet will allow players to challenge Gym Leaders in any order, but based upon what we know thus far, will not include level scaling. Thus, to challenge the Gym Leaders in any order in a satisfying way, players can challenge high level Gym Leaders with different high level teams gained from battling throughout the open world, and challenge the lower level Gym Leaders with lower level teams. Using this method to take on the Gym Leaders could provide an actual challenge to players that wish to battle the Gym Leaders in any order and make it possible overall. That way, you could use your all-time favorites and still develop bonds with the generation’s many new Pokémon, enhancing your playthrough. 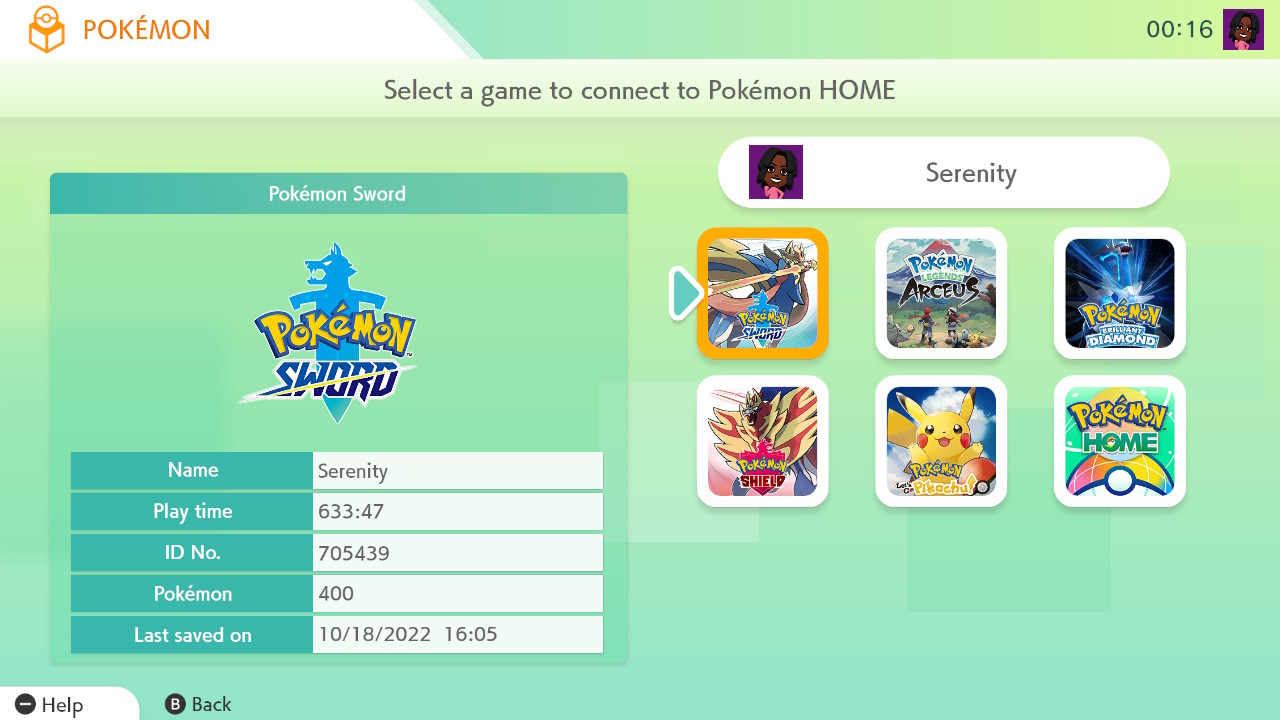 Transferring young, freshly hatched Pokémon from your previous game to your current Pokémon Scarlet and Violet game offers many positive benefits, such as being able to use and bond with your favorite Pokémon, potentially stronger Pokémon, and making the game somewhat less of a grind, which can add a different dynamic to your playthrough. To begin your journey with almost any Pokémon of your choosing, in your previous game, breed any Pokémon of your choice by placing it in the Pokémon Nursery with a compatible Pokémon, hatch the eggs, deposit the freshly hatched Pokémon in Pokémon HOME, and transfer the new Pokémon to your new Pokémon Scarlet and Violet save game. For example, if you wish to begin your Pokémon journey with one of the new Starter Pokémon in Pokémon Scarlet and Violet and five of your favorites from previous generations, transfer five of your freshly hatched Pokémon to Scarlet and Violet, and add them to your party after reaching the first Pokémon Center.

Doing so would allow you to essentially begin your journey with six “Starters” of your own choosing. Additionally, transferring Pokémon from your previous game allows you to use potentially stronger Pokémon, such as by breeding for more powerful IVs and Effort Value (EV) training your Pokémon. For instance, before transferring your Pokémon, breed your Pokémon to have good IVs, maximize their best stats with EV vitamins such as Protein, Carbos, Calcium, Zinc, HP Up, and Iron, and if necessary, use Nature Mints to change their Nature to one that maximizes their best stat. Thus, when you transfer your Pokémon to Pokémon Scarlet and Violet, this allows you to begin your playthrough with Pokémon that can battle at their full potential at the very beginning. This can make battles against potentially tough opponents such as late-game gym leaders, the Elite Four and Champion, and opponents in battle facilities easier than normal and more fun. Another benefit from transferring your Pokémon from your old game to Pokémon Scarlet and Violet would result in your Pokémon gaining a 50% experience boost after defeating an opponent for having a different Trainer ID number, which could make leveling up your Pokémon much less of a grind during your playthrough.

In brief, those were five different ways to enhance your playthrough for the upcoming Pokémon Scarlet and Violet titles. These tips should add a different dynamic to your Pokémon playthrough while you travel the Paldea region and make your adventure more fun and challenging. What do you enjoy doing when partaking in your Pokémon adventure?