The Appearance of Unova: The Perfect Unity of Sprites

The more realistic something seems, the less one can suspend their disbelief with it. As Pokémon games improve their graphics, more detailed 3D models and realistic backgrounds visually clash with the less polished areas. From instances of background elements feeling out of place when compared to the anime-inspired looks of the characters, to characters claiming they hold something in their blockish hand only to have it be completely empty, to claiming that actions are occurring but the screen cuts away or fades to black each and every time to avoid animating these actions—all these examples weaken the execution of modern Pokémon titles and do not properly make use of what 3D graphics are capable of producing. Not to mention the weakened character execution that comes from ineffective use of 3D, such as all of Alola’s residents speaking with one hand on their hip and waving the other around vaguely, the inappropriate blank stares of the protagonist while every other character is capable of expressing themselves through changes in facial textures, or Hau and Hop’s cross-generational connection via hopping around excitedly whenever literally anything happens.

Sprites, on the other hand, can “get away” with more precisely because they show less. Buildings in newer games need to be of proper scale and amount to make a city really feel like a city—a necessity now that the series is pushing towards more realistic proportions in its characters. But surely not every single building can be accessible, so the result is locations that look huge but feel incredibly small thanks to the amount of places that can actually be entered. An older city like Gold, Silver, and Crystal’s Goldenrod can get away with oddly-shaped houses with no space between them and most having no doors because the game already looks very unrealistic to begin with—players’ suspension of disbelief is kept consistent, and as such they do not see anything wrong with this scenario. It is the same reason why classic 2D animated films can utilize drastic color palettes and singing animals while 3D remakes focused on being “hyperrealistic” cannot without feeling as though something is inherently wrong. 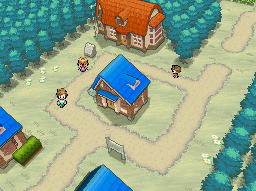 Black and White are in that perfect balance—understandable, as the fifth generation was the final one to utilize sprites—where by being sprite-based they can take shortcuts, but the sprites are detailed and polished enough that the locations still feel distinct, full, and almost as if they could truly exist in reality despite their fantasticalness. This allows places such as Nuvema Town to have a measly total of only four buildings without seeming totally awkward, and for Castelia City to still feel massive despite the player not being able to enter every single building or visit every individual floor of the ones they can enter. People rushing past is a shorthand for busyness and crowdedness—a shorthand players understand and that enhances the worldbuilding under the confines of a 2D game on the Nintendo DS hardware.

This sprite work also allows characters to feel dynamic without fully animating them. Although, it must be noted, that each main character does have a special animation all their own—including an impatient foot-tapping for Cheren and Bianca pulling her hat down to cover her face in disappointment. Wind blows through Alder’s hair, Ghetsis raises his left arm, and N boasts a head shake, raising of both arms, and raising one arm to call for his dragon. This is all already a beautiful additional effort and detail in the gorgeous sprite work of the games. But when it comes to player discussion, it is all down to imagination. 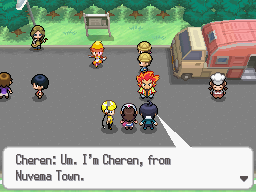 There are no facial expressions or animations, generic or otherwise, for characters to use when conversing with each other. For instance, Cheren’s first interaction with Alder can be interpreted different ways—after Alder assures Cheren that he is the Champion and is definitely not “goofing off,” Cheren replies with a simple “Um. I’m Cheren, from Nuvema Town.” Is that a sassy “um?” Or is Cheren perhaps trying to be more considerate—less “judgmental,” as Alder just described him—and choose his words more wisely, padding out his thoughts with filler? Each and every bit of dialog in Black and White can be interpreted freely by the player’s imagination, and this gives players both a talking point as well as additional investment in the story. To start with the latter—players become more invested because they are forced to imagine the “little details” of these scenarios. For the former, these differences that will naturally occur—as each person is different and will therefore have a different mental image—allow fans to discuss their variety of interpretations. If everyone saw the same thing, there will only be so much to talk about—but allowing this kind of interpretation, on top of the leagues of literary interpretation already provided by the narrative at large, makes Black and White truly dynamic. Consider how even when a novel describes the physical appearance of a character, each reader has a slightly different mental image of what they look like, and relish in sharing fan art of their interpretations with each other.

One of the most commonly discussed elements of the sprites in Black and White, however, are simply how they look. Black and White were the first games in the main series to utilize full back sprites, and were also the first games to utilize a “dynamic” camera during battle. Just as the camera in the overworld takes dynamic angles in certain spots, giving players swooping views of major landmarks, the camera during battle pans and zooms as Pokémon unleash their attacks. This is really the most dynamic a camera can be on a 2D plane with 2D sprites—the effort needed to include this is astounding and really brings battles to life, in addition to the sprites of the Pokémon themselves being full of character. But a big focus was brought to how “bad” the sprites looked when zoomed in or out from. Sometimes characters have odd stretching resulting in humorous or simply unappealing in-betweens. But really, it is a small price to pay—not to mention in-betweens usually look rather odd anyway, even in the most professional of animated movies. The Pokémon series visuals had been improving naturally from generation to generation, but the camera angles were not. Battles were bland and scenes were stale. That is, until Black and White breathed new life into the camera just as it breathed new life into the Pokémon sprites.

And the long-term result is that Black and White are extremely future-proof. Booting up a DS cartridge on a Nintendo 3DS automatically stretches the screens to fit the 3DS’s aspect ratio, and it is no exaggeration to say that it is shocking and flat-out ugly. When I forget to press the correct buttons to maintain the original aspect ratio, I go out of my way to restart the game to ensure I get it in that original screen size. But that is not so for Pokémon Black and White. I did not even realize I had been playing with the screen sized up because it looked just as good as it did on the Nintendo DS. Because the sprites are designed to be sized up and down for use with the overworld camera or battle camera, the entire game can be resized as needed on future consoles, something other DS games unfortunately have to contend with.

Black and White truly pushed sprites to their limit, resulting in a gorgeous game that holds up even ten years later. The dynamic camera is exactly what the series needed to feel visually exciting. And as if that was not enough, even the storytelling benefits from its 2D execution, offering additional room for analysis and interpretation. Pokémon sprite work culminated at this point, one final love letter to the visual style that had serviced the series so well up until the change to 3D on the Nintendo 3DS.