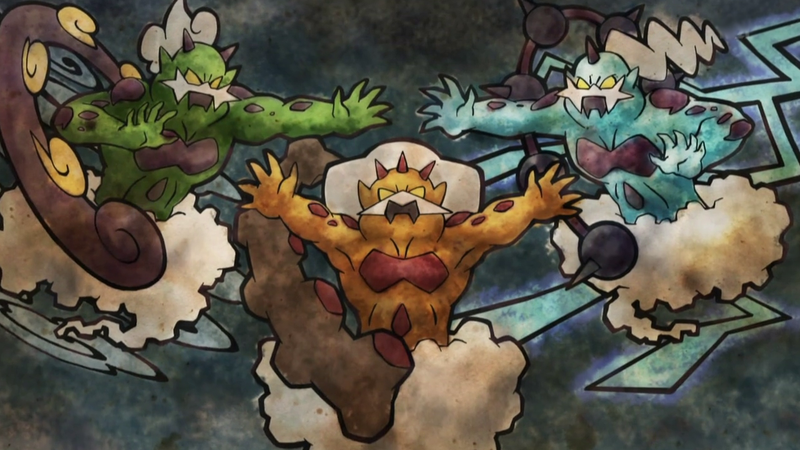 The Legends of Unova: The Perfect Unity of Discovery

Black and White introduce nine new legendary Pokémon and Unova contains many optional dungeon areas that house them. Although the fan-spouted narrative is “there are too many legendaries so they’re not rare or special,” this could not be further from the truth. Instead of simply reusing the Kanto legendary birds like every other generation—yes, the second generation does not, but not to worry, they “fixed” that in the remakes—Unova has its own host of original legends that contribute to its worldbuilding and further reward players for exploring optional areas.

The first group of legendaries is loosely based on the characters of Alexandre Dumas’s The Three Musketeers. This group includes an Athos-like leader, Cobalion, a strong Porthos-esque member in Terrakion, and an elegant Aramis stand-in with Virizion. In Black and White, their narrative relevance is so strong players must actually seek out Cobalion first—hinted at by NPC dialog that mentions it specifically. When nearing Cobalion in Mistralton Cave’s Guidance Chamber—a three-floor dungeon which requires the combined use of Surf, Strength, and Flash—an old man imparts some history onto you:

“In the distant past, when Pokémon and people lived in different worlds, a war between people started an intense fire in a forest where many Pokémon lived. The Pokémon were surrounded by smoke and flames. They were in big trouble. And then, the legends Cobalion, Terrakion, and Virizion appeared! Terrakion used its amazing strength to destroy rocks blocking the escape route. Virizion used its quick movements to protect Pokémon from looming flames. And Cobalion led the frightened Pokémon out of the burning woods. The people who started the war were routed by the power of the legends. Because of Cobalion, Terrakion, and Virizion, the war was ended.

“When people fight, there’s no peace for Pokémon, either. The three legends learned that the deeds of humans could lead to dire consequences for their world. They cut themselves off from people and disappeared. No one saw much of them after that, and the three faded into myth … The legendary three do not trust people. If people approach, they bare their fangs and attack. It can’t be helped, because they only know the old world… They still don’t know the world has become a place where people and Pokémon try to understand and help each other.”

While it is inevitable for a Pokémon game to push the ideal that people and Pokémon live together happily, this is a very rare instance of the series showing the harm that can befall Pokémon at the hands of people, even when people are not directly involved with them. This is far more than just another evil team disrupting the peace—these were people whose actions started a war amongst themselves that inadvertently harmed innocent Pokémon, and the legendary Cobalion, Terrakion, and Virizion rightfully hate humans because of it. There are, in fact, instances where the further separation of people and Pokémon would have proved life-saving. 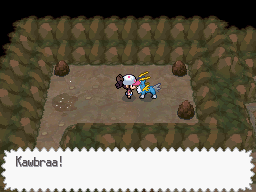 Still, the player, inherently good and pure by design, is given the opportunity to face off against Cobalion. If you can capture it, the old man from before approaches you once again. “It seems that thanks to you, Cobalion has sensed a change in the world. It’s a world where people and Pokémon help each other and live together.” Time, one of Black and White’s central themes, causes not only an individual’s perspective to change, but an entire group’s—or the way of the world itself. Things are different in Unova now than they were before, and if you can convince Cobalion that people and Pokémon can live together, perhaps you can convince N of this, too.

The old man also informs you that, because of the close bond between these three legends, Terrakion and Virizion will likely be willing to face you as well, and “the obstacles that separated Terrakion and Virizion from people are probably gone now. Whether you want to search for those two is up to you, but they are definitely waiting for you…” Players who noticed the immovable rocks in Pinwheel Forest before may now return to find them gone, leading the way to Virizion’s Rumination Field. Depending on when you tackle this “side quest,” you may never even see the boulders that block the way to Terrakion’s Trial Chamber in Victory Road. Any of these Pokémon can be caught before the credits roll or saved as a post-game treat, and depending on your aptitude for exploration, you may already have a sense of where the remaining two lie.

This all builds up to the gameplay prowess of this trio—in addition to actually holding lore relevance, these legendaries also provide a surge in Unova’s already phenomenal sense of discovery and adventure. Although multiverse shenanigans are practically a necessity to give players an easier way to complete their Pokédex and for competitive players to use legendaries on their teams in more recent games, there is a notable difference in their obtainment. The satisfaction felt after playing a quick mini-game and hoping that you entered a wormhole with a legendary that agrees with the Synchronize Pokémon you brought—or contains a legendary at all—is not even close to what is felt after actively exploring an optional dungeon and being greeted with a legendary battle at the end. Modern legendary encounter methods are a necessity, but there is no exploration to reward, no sense of adventure to instill, and the multiverse traveling means the legendaries have no worldbuilding relevance, either. 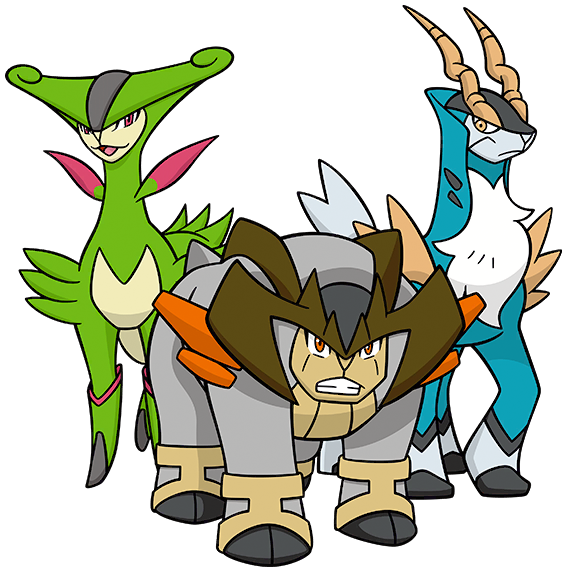 After obtaining the final badge, Route 7 is beset by a frightful storm. An old woman invites you into her home and says this is the result of a rascally Pokémon. It is known to loose uncontrollable winds, heavy rains, and disastrous thunderstorms wherever it goes, destroying the local crops—and even houses—in the process. After catching a glimpse of you, either Tornadus in Black or Thundurus in White will begin “roaming” across the Unova region. “Roaming legendaries” are found randomly throughout the region in the tall grass, and once you encounter it, it flees from battle and moves to another route. Players must devise a strategy to capture these fleeting Pokémon, either through “trapping” moves or Abilities, or slowly damaging them one battle at a time.

In Unova, these Pokémon’s presence are accompanied by severe storms—heavy rain and thunder far more intense than the normal overworld weather conditions. The electronic bulletin boards throughout the region’s gates will also make note of where these storms are occurring to help guide players. The Pokémon also move in a pattern, starting at the southern end of Unova in the mornings and making their way up north as the day passes. Players may try to capture this legendary immediately or leave it for later—but players who can obtain both, through trading with another game or by event distribution, can access one final legendary in this group.

After you have completed the main story portion of the game, the eastern half of Unova opens up to you. Route 14 in particular is blessed with flowing rivers and crashing waterfalls. Through careful exploration, players can find the Abundant Shrine hidden away here. The people in this place are thankful to the Abundance Pokémon, Landorus, for blessing them with bountiful crops after putting a stop to Tornadus and Thundurus’s antics. With both troublesome legendaries in your party, Landorus himself will appear at the shrine.

Filled with hidden mushroom items and featuring unique dirt fields, the Abundant Shrine lives up to its name and lore. Its Pokémon inhabitants are appropriate as well, being based on Japanese myths such as Bronzong, based on the bronze bells that were thought to bring good harvests, and Stantler, based on the shishiodoshi, or the Japanese equivalent of a scarecrow that scares animals away from their gardens. And, of course, Landorus, based on the Japanese fertility and agriculture god, Inari, would naturally have kitsune messengers in his domain, represented by the wild Vulpix and rare Ninetales encounters. 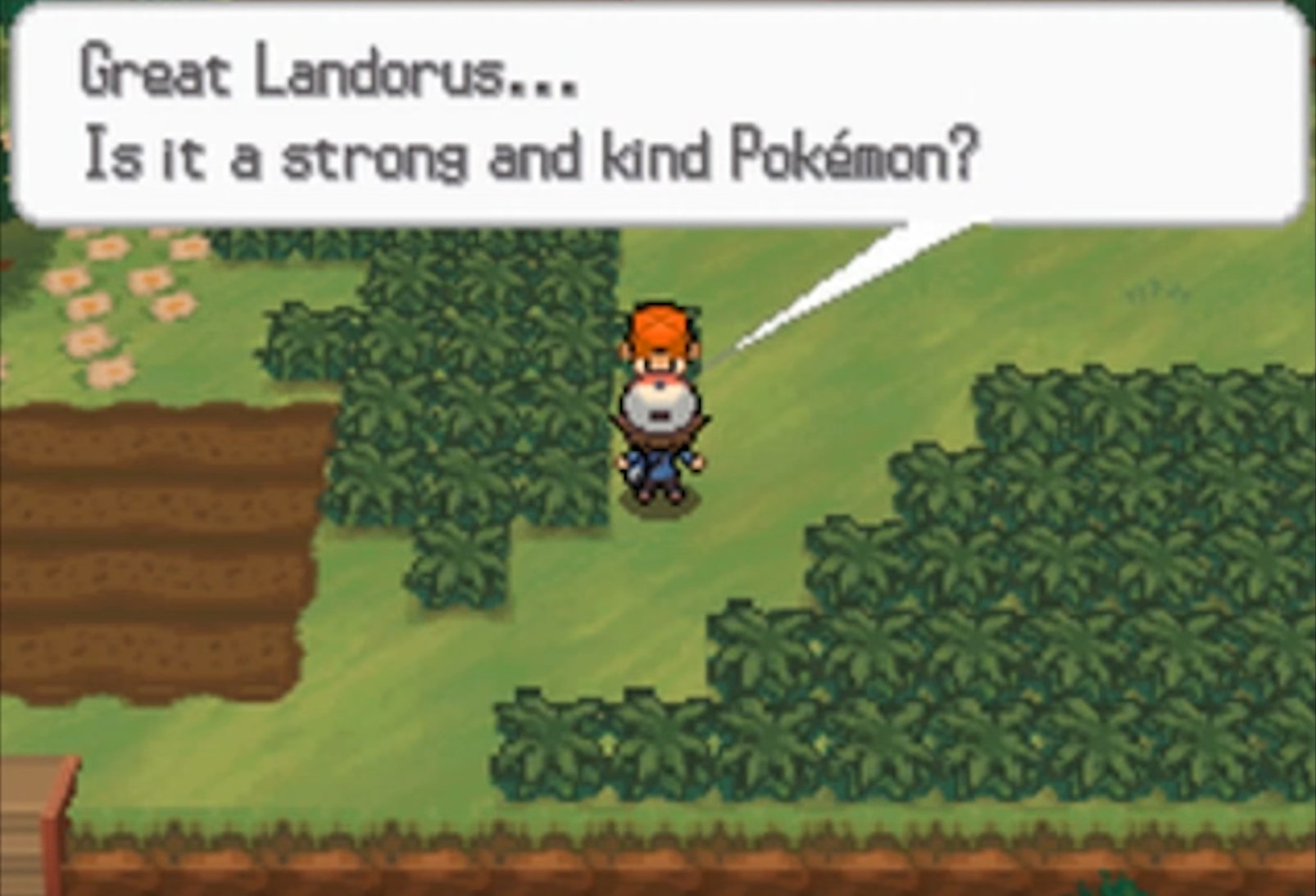 Tornadus and Thundurus are also based on Japanese deities—the mischievous brothers, the wind god Fuujin and thunder god Raijin, respectively. Unlike the stationary deer trio, who distanced themselves from humans after humans severely wronged them, the pranksters Tornadus and Thundurus force themselves into humans’ lives to inconvenience them. Like the old woman on Route 7 said, people want nothing to do with these two! It may truly be better if humans were separated from them. But thanks to Landorus’s interference, people could live peacefully and in abundance—better than ever before. As a result, people built a shrine to thank him, and, despite the passage of time, the shrine still stands strong. Although not nearly as populated as it was in the past, “it still feels the same as it did then,” according to the Town Map.

While Tornadus and Thundurus give players a roaming legendary to seek, Landorus continues the emphasis on exploration and discovery, his abode hidden away in a post-game area that is just as rich with lore as it is hidden collectibles. This destructive duo and commanding leader again align with Black and White’s ideas pertaining to the separation of people and Pokémon—this time focusing on how Pokémon can ruin the lives of people—while subtly implementing the sub-theme of tradition, based on the games’ emphasis on time. Despite the passage of time, the Abundant Shrine remains unchanged, and the people within it still thank Landorus for his bounty despite not having appeared in quite some time—and curse the rambunctious roamers. Unlike with the musketeers, who have been affected by the changes that come with time—like those seen across the region in Black—these genie-esque gods and the lore surrounding them has remained fairly unchanged—like the locations found in White.

More than just conveniently aligning with some of the games’ underlying themes, the legends of Unova significantly add to its lore and elevate its top-notch level design by providing even further reason to explore. It is no surprise that the primary legendary Pokémon of any given game—the “mascot” legendaries—would be fleshed out and narratively relevant. But Black and White apply relevance—both in terms of lore and in terms of gameplay—even to entirely optional legendaries that players may never cross paths with. You never know what lurks behind any corner until you see for yourself—and it may just be the stuff of legend.