My two most impactful memories of Black and White “discourse” come from my undergrad days. The first was from when I was still majoring in Game Development, and on a date with a fellow student. The subject of discussion inevitably shifted to our favorite games. He already seemed skeptical when I told him I loved Pokémon, but still he followed up with which one specifically was my favorite. Black and White, the newest ones, was my answer. They had been my favorite since their launch—perhaps even earlier, as I was one of the rare few excited for the titles even during Japan’s pre-release period (remember when Pokémon games didn’t launch simultaneously worldwide?) among a sea of vitriol on online discussion boards.

This, however, really set him off. He went on a tirade of how recent Pokémon games are all awful, and the series peaked with the originals—a living, breathing “genwunner,” of which the online phenomenon itself was peaking around this time. When it seemed he was finally done explaining to me about why all the new Pokémon designs are awful and the gameplay is stale, I timidly spoke up: “I think the story is really good…”

“The story? About ‘Pokémon liberation?’ With the character who uses Pokémon to battle? It’s a joke! The real bad guy is so obvious, how does N not realize it?”

I tried to explain that N had been brainwashed, to which he replied that was unrealistic. “But novels include brainwashing all the time,” I told him, trying to stand my ground as best I could.

“Like in 1984? Are you really comparing Pokémon to George Orwell?” On the way back to our dorms he continued to explain how ultimately it didn’t matter because Nintendo was on the road to bankruptcy within the next two years, and indie games were the only games worth playing because AAA developers were all devoid of passion, and if I was a “real gamer” I would understand this and change my shameful ways.

While it was very easy to block him on social media and disregard most of his opinion after that, young, impressionable me was unfortunately affected by one thing he had said—that no matter how good Pokémon narratives were, they could never be too good. They were just Pokémon games, right? They can never be deep or meaningful, right?

Fast forward about three years later, and Nintendo hasn’t yet crumbled—and Pokémon is holding strong in its sixth generation. I was the president of the school’s Pokémon club at the time, and through hard work and cooperation with the rest of the council was able to consistently double the club’s already high turnout. We additionally revamped the Gym system to be more competitor-friendly—yes, we had “Gym Leaders” with badges you could earn, and we had an Elite Four and a Championship tournament, too—and applied other major changes to provide an overall higher club budget. The club was thriving and members were happy no matter which games they played, be it the new Omega Ruby and Alpha Sapphire or an older title. During the club fair that year, the vice president and I had set up our stand and were happily recruiting potential new members.

Until the second unpleasant encounter occurred. A young man, likely a freshman, came up to the booth. Without so much as a greeting, he asked us which Pokémon games were our favorites. The VP looked to me, letting me speak first.

“Those games suck,” he said bluntly, walking away before I could finish a single sentence. I never saw him again—not once did this young man even stop by the Pokémon club.

Yes, this can’t really be considered “discourse,” but this was years after Black and White were released, and the online domination of genwunners had finally mostly died down. Admittedly, Black and White had plagued pre-release periods, with the vast majority of online discussion groups reacting negatively towards the titles, but so much time had passed since then—surely people were softening up to the games by now? Unfortunately, that didn’t seem to be the case—online, under the veil of anonymity, people were harsher towards the games than they had been to my face. 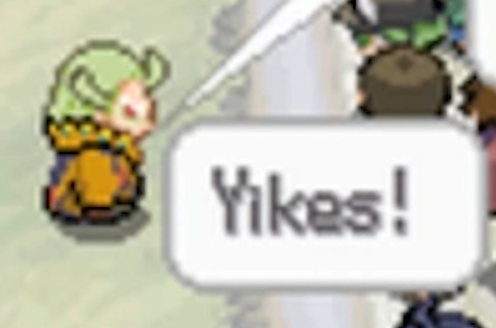 Now, Black and White released in Japan one entire decade ago. The games are growing a tiny bit more in favor due to age and the inevitable nostalgia that comes along with it, but the games are still massively disliked among the playerbase at large. Recent—as in, late 2019 to early 2020—YouTube videos are made with their “hot takes” on why Black and White are “actually really bad games,” yet their arguments are the same few points that have been beaten into the ground and back since the games’ initial release—”Unova is a circle,” “the Pokémon designs are bad,” “the bad guys don’t make sense.” People who defend Sword and Shield‘s unpolished graphics with declarations of “We don’t play Pokémon for the graphics” berate Black and White‘s sprites for “looking ugly.” People who love Latios and Latias deem Tornadus, Thundurus, and Landorus “awful designs whose silhouettes are too similar.” People who demand more challenge in Pokémon games make comments on Reddit praising the second generation’s postgame “despite the poor level design and lack of difficulty because there are badges,” but Black and White‘s postgame “doesn’t count because it’s too hard.” People who defended Dexit with “Don’t you want to use the new Pokémon in the new Pokémon game?” have “I hate that there are only new Pokémon in Black and White‘s main game” in their post history. It’s as if people hold Black and White to a completely different set of standards than they do every other Pokémon game.

There are, of course, the Sword and Shield “dissenters” who have taken a bit of a shine to Black and White now as hindsight turns out to be 20/20 (what a rather appropriate year for the games to celebrate such a milestone anniversary!). And there are, of course, those who have loved the games since the start. But in the end, most who look fondly upon Black and White do so with limited understanding of exactly why they’re so good. I don’t say this as an insult towards these people because it’s truly by no means their fault. It’s not simply a matter of age affecting the memory, but mainly the misinformation spread across nearly a decade by those dead-set on tarnishing its name. Another recent video—this one surprisingly in favor of the games—goes over the entire fifth generation’s music. A comment that stood out to me praised N and his musical themes. This is something I can get behind! But the commenter goes on to list “An Unwavering Heart”—or “Emotion” or “Unwavering Emotion,” as it’s frequently called on YouTube—as N’s farewell music. In reality, “Farewell” (“Sayounara” in Japanese) is N’s farewell theme, and is only played that one time in the entire game. But the more recent games, X and Y, brought attention to “An Unwavering Heart” in Coumarine City. Combine this with most players not replaying Pokémon games multiple times, and it’s understandable that this kind of misinformation gets spread—and it certainly doesn’t help that most Pokémon music YouTube channels show a picture of N on their “An Unwavering Heart” videos. This is why I say that even fans of generation five don’t always understand why the games are good or why they really like them—unintentional misinformation spread across ten years mixed in with intentional misinformation spread by a dedicated group of haters will do that to you.

Even I, the (self-proclaimed) Biggest Gen. 5 Fan of All Time, have fallen victim to this. Back when the games were fresh off the presses, any attempt at “intelligent discussion” on discussion boards involved the rare fan conceding to a false point in hopes that the “hater” would listen to what they had to say. This led to a massive dissolving of the strengths of the games and a massive misremembrance on the part of even the biggest fans. So while I could easily point out the hypocrisies of arguments like Alder’s battle theme music being “unfitting because it sounds like a post-game battle theme” or Hop being “one of the best characters in the series because no other Trainer’s team changes to reflect a narrative development the way his does,” I couldn’t fend off arguments such as Kukui being the best series professor “by default because no other professor interacts with the player during their adventure”—I myself had forgotten just how plot-relevant and narratively-involved Juniper was in Black and White!

Even as someone who went into this project with the “gen. 5 best gen.” mindset, I feared due to my growing more critical with Pokémon over the years that I would come out finding flaw after flaw in the games. But what really happened is that I was floored with how much better Black and White were than I had remembered. There were so many carefully-crafted components I had completely forgotten about, having fallen victim myself to the intentional devaluing of details in the vain attempt to convince others that there was more to the games than a trash bag and ice cream Pokémon. Due to many external factors, this project took years for me to complete, but I held on, through thick and thin, because I know this discussion is more important now than ever before. On its tenth birthday, I want to present exactly what makes Black and White so fantastic, without leaving out any details in fear of sounding “too lenient” with the games.

Forget what those extremist gatekeeper gamers say—just because a game can target the child demographic doesn’t mean it can’t have a story filled with complexity and meaning with relatable, striking, and nuanced characters. Far from “gen. 5 best gen.,” Black and White are among the greatest games ever conceived. If fans who defend newer titles through thick and thin truly believe their overt positivity to be out of love for the series rather than fear of critical thought, then I implore them to give this discourse a read with an open mind—they may find themselves reevaluating the games they once saw as irredeemable. Fans who already love the fifth generation should check it out, too—they may find even more to love about Unova just as I had.

Matters of fancy-schmancy symbolism and game design aside, Black and White are games about people connecting despite their differences. Black and White may seem drastically different from other Pokémon games at first due to their strict linearity and use of completely-new Pokémon, but they’re absolutely worth a fair examination for what benefits they brought to the series as a whole. At the end of the day, they’re another installment in the Pokémon franchise that we all know and love, and it’s beyond beneficial to take another look at the games without the clouded judgment that once persisted a decade ago—and still persists to some degree today. We need to cast it off in order to really learn to appreciate what not only these games but the entire series has to offer.