Sygna Suit Blue and Blastoise, and Sygna Suit Leaf and Venusaur are coming for the Pokémon Masters EX anniversary! The banner for Blue will come August 27th at 11:00 p.m. PDT, and the banner for Leaf will come three hours later, at 2:00 a.m. PDT. But, how exactly good are these two Sygna Suit Pairs?

Sygna Suit Blue and Blastoise comes as a 5-star Water-type support character, with a weakness to Electric. 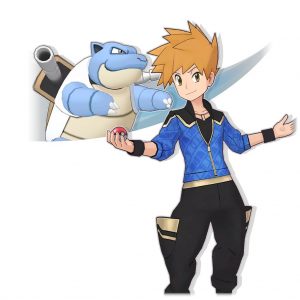 Sync Move: Triumphant Hydro Cannon: Mega-evolves into Mega Blastoise until the end of battle. The more the user’s Defense has been raised, the greater the power of this move.

Sygna Suit Blue with Blastoise’s stats make them the bulkiest sync pair in the game. His ideal play-style is to be the primary target of opposing attacks, buffing up the team in the process. He supports the team using X Defense All and To the Top! His passives help along with supporting the team too: Force Field has a good chance of raising the Sp.Def of all allies when he uses a move (synergistic with X Defense All), and when he’s taking hits, his Team Shout 9 passive raises the Attack or Sp. Atk of all allied sync pairs, making him ideal for the primary target of opposing attacks. Finally, Safety Net lets your allied sync pairs endure a fatal hit when he uses a sync move for the first time.

You’d want to focus on getting Water Pulse: Move Gauge Refresh 3, and X Defense All: MP Refresh 3, for standard battle momentum on gaining back move gauges while attacking. To the Top! : MP Refresh 3 can give you more MP for that move after using it, having Quick Cure removes flinching, and trapped conditions from the user once during battle, and Natural Remedy removes any and all status conditions from the user when the user is inflicted by any status condition. Wise Entry 2 is handy for a quick buff to Sp.Def when he enters battle, and you can try him out in a Rain Dance team with him having Refreshing Rain 1, that restores the Pokémon’s HP whenever it takes an action when the weather is rainy.

Try having Synga Suit Blue with teammates that have Potion to help him recover. Skyla with Swanna with her ideal sync grid makes her pretty much the best Potion user in the game, or you can use the Main Character with Pikachu, or even Synga Suit Leaf with Venusaur. Having sync pairs like Sabrina with Alakazam or Phoebe with Dusclops are handy for raising critical hit too – something that Synga Suit Blue isn’t quite ideal on raising. Winona with Pelipper is a must if you’re planning on having Blue within a Rain Dance team.

Sygna Suit Leaf and Venusaur comes as a 5-star Grass-type tech character, with a weakness to Psychic. 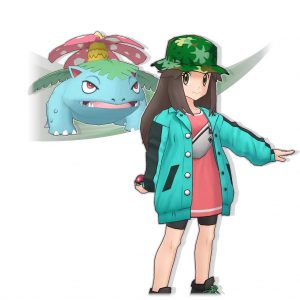 Sync Move: Tenacious Frenzy Plant: Mega-evolves into Mega Venusaur until the end of battle. Its power increases if the target is poisoned or badly poisoned.

Sygna Suit Leaf with Venusaur is a fairly strong tech sync pair who can badly poison the opposing sync pairs, thanks to the Venomous 4 passive with Razor Leaf. Razor Leaf can hit all the opposing sync pairs on the field, allowing her to badly poison all of them at once. This also synergies with Sundering 9, as each opposing sync pairs hit will also have their defense or special defense lowered. She also has Potion, which is a handy staple for any team. She’s also good for reducing the sync move countdown with Mega Healing! functioning similar to Sygna Suit Elesa’s Breathtaking!, but giving each allied pair a regen effect. When she uses a sync move for the first time, Adrenaline 2 reduces the sync move countdown as well.

Three of Sygna Suit’s Leaf’s most powerful panels are Toxic Power 5 that increases her damage against opponents who are poisoned or badly poisoned, Potent Toxin 2, that raises damage the target takes from being poisoned or badly poisoned, and HP Advantage 4, in which the more HP the user has remaining, the more it powers up moves. Together, they are very powerful to take advantage of! Razor Leaf: Move Gauge Refresh 3 is standard for move refreshes, which is handy when you’re using Razor Leaf to poison the opposing sync pairs, especially in drawn-out 3v9 battles. Mega Healing!: MP Refresh 3 can have a chance to regain more MP after using the move(which has 1 MP). Potion: Master Healer 2 can help Leaf increase the amount of HP regained from her Potion, and Potion: MP Refresh 3 has a chance to regain more Potion MP. She also has panels to help her function within a Sun Team, with Speeding Sun 2 and Healing Sun 1.

Having Sygna Suit Elesa with Rotom and Sygna Suit Cynthia with Kommo-o is a great way to lower sync move countdown greatly. Sygna Suit Cynthia in particular benefits with this, because every time she uses her sync move, she raises her Attack, Defense, Sp. Atk, Sp. Def, and Speed. The usefulness of sync move countdown reducing also applies for every powerful sync pair who has a Pokémon that can Mega-evolve, like Red and Charizard. Koga with Crobat and Plumeria with Salazzle with a developed grid appreciates having the opposing team being poisoned, because their moves greatly power up thanks to their Toxic Power 2 and Toxic Power 3 grid panels. You can also have Janine with Ariados, who also benefits against poisoned foes because of her Venom Drench, lowering the opposing sync pair’s stats. If you want to use her in a Sunny Day team, pair her up with Silver with Ho-Oh or Blaine with Ponyta for them to set up Sunny Day, or you can have Lyra with Meganium when her sync grid comes out, to take advantage of Solarize.

Both synga suit pairs look pretty strong, but if you want to chose between one or the other, you’d probably want to focus on getting Sygna Suit Leaf. That isn’t to say Sygna Suit Blue isn’t good, but while Blue and Blastoise are bulky, their tools aren’t as good as Leaf and Venusaur. To get the most out of both of them, you’d also have to consider having them reach 3/5, or in other words, having 3 copies of them to gain full access to their sync grids. Still, both are good in their respective rights, and their banners last for a whole month, so you’ll have plenty of time to try and get them both!

Edited by bobandbill and Ranko.

An experienced competitive player who have been playing in the competitive scene ever since Generation III. Dragon here specializes in competitive articles.
Read comments