StarGazr was kind enough to spare some time to have a chat with me about the remake. 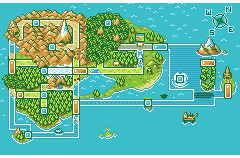 How long have you been developing Quartz DX, and what inspired you and your team to start the project?

Ahh, I’d say QDX has been in development for about a year? I started doing sprites on December 2017, but it was just a solo project I did in my spare time. People started joining in around March 2018-ish. I thought it’d be a nice “thank you” to Baro for inspiring me to make my own art when I was a kid. He did his best when he made it, so I’ll do my best to polish it up. Others on the team joined for different reasons. Devs from other hacks wanted a more relaxing “easy” project, friends joined for nostalgia… a lot of people have been brought together by my dumb project and I’m glad I could make that happen.

What’s your favourite Quartz Pokémon and why?

Right now I have a lot of favourites, but my four biggest ones are Furning, Descomune, Gritespec, and ironically enough Babos. Furning stuck in my head for the longest time. I saw it in this REALLY old YouTube video about Quartz and thought it was the coolest thing ever, so you have that one to thank for this project lol. Descomune was always a huge favorite for me because of the cute concept and was the first sprite I ever did for the project. Grite has quickly become the game’s mascot because of how well-liked it is by everyone on the team. Even Baro himself claimed it was one of his favourites. Everyone loves a cute little ghost! As for Babos… it’s a weird one to like, but it’s such a strange design and I’ve never seen another hack with a ‘mon quite like it. According to interviews, Baro said Babos was his least favourite but it’s so iconic I can’t help but adore it.

How about least favourite?

My least favourites are ones like Fishix and Coalchar. As many neat ideas as Baro had, he also had a few really uninspired ‘mons. A good chunk of these weren’t obtainable in Quartz and didn’t appear in Marble either. It’s pretty understandable though, since it was just him coming up with all the designs.

Aside from sprites, what has been the biggest challenge when developing the game?

Right now really the hardest part is finding out what features we can and can’t add. Ruby doesn’t have nearly as many tools as FireRed and Emerald do which limits things a ton to begin with, but we also suddenly lost our most skilled programmer very early into the project. As a result, we had to scrap a couple things because they simply weren’t possible to implement without him.

Have you got any standout memories from playing the original? If so, what was it?

I’d say my fondest memory was seeing designs like Energiz and Babos for the first time. Even Baro’s ugliest ‘mons have this weird charm to them that hooked me in as a kid.

If you guys are successful with QDX, have you got plans to remake and finish Marble next?

Currently, I personally dont have plans to remake Marble. My team have an idea of what Baro wanted, but I feel that we don’t know/have enough to make a finished Marble without putting a ton of our ideas in his plot. With QDX my goal was always to polish what was there without completely changing or clouding Baro’s ideas, and I feel that isn’t really possible with such an unfinished hack. Plus Marble never really caught my eye as much. 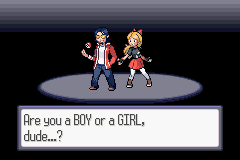 Be sure to keep an eye out for Pokémon Quartz DX!