Update: A new version of the image has appeared on the official Pokémon Sword and Shield website. 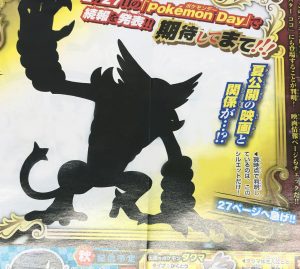 It appears that CoroCoro is at it again, as a silhouette of the upcoming Mythical Pokémon has been leaked.

The silhouetted Pokémon, which is set to be revealed on Pokémon Day on February 27th, appears to have a somewhat slim build. By comparison though, its arms are rather large, almost muscular, and its hands feature claws. It is currently not known what its name, typing, or Abilities are, however further details will be revealed on Pokémon Day. We’ll keep you updated when more information comes.

What are your thoughts on this mysterious Pokémon?

Thanks to PokéBeach for providing the original source.

HeroLinik is a near-lifelong Pokemon fan ever since he got his hands on a copy of Pokemon Ruby for Christmas in 2002. You’ll often find him cogitating his next competitive Pokemon team, thinking up ideas for his next YouTube video or just chilling in general. As well as being a moderator on PokeCommunity, he is also a moderator on r/Pokemon's Discord server, the largest Pokemon community on Discord.
Read comments