At long last, details on the spiritual successor to Pokémon Bank, Pokémon Home, have been announced. There is a lot to unpack, and it is important to approach the information critically in order to make the best-informed decision possible in regards to how you want to use it. In this article, I will go over the different features of Home (more specifically, those I deem to be of significant enough value to bear any effect on the price of the premium plan—as much as I love stickers, the “room” function of Home does not matter much in the grand scheme of the application). I will look at their pros and cons, as well as uncertainties that may be of importance in the future. 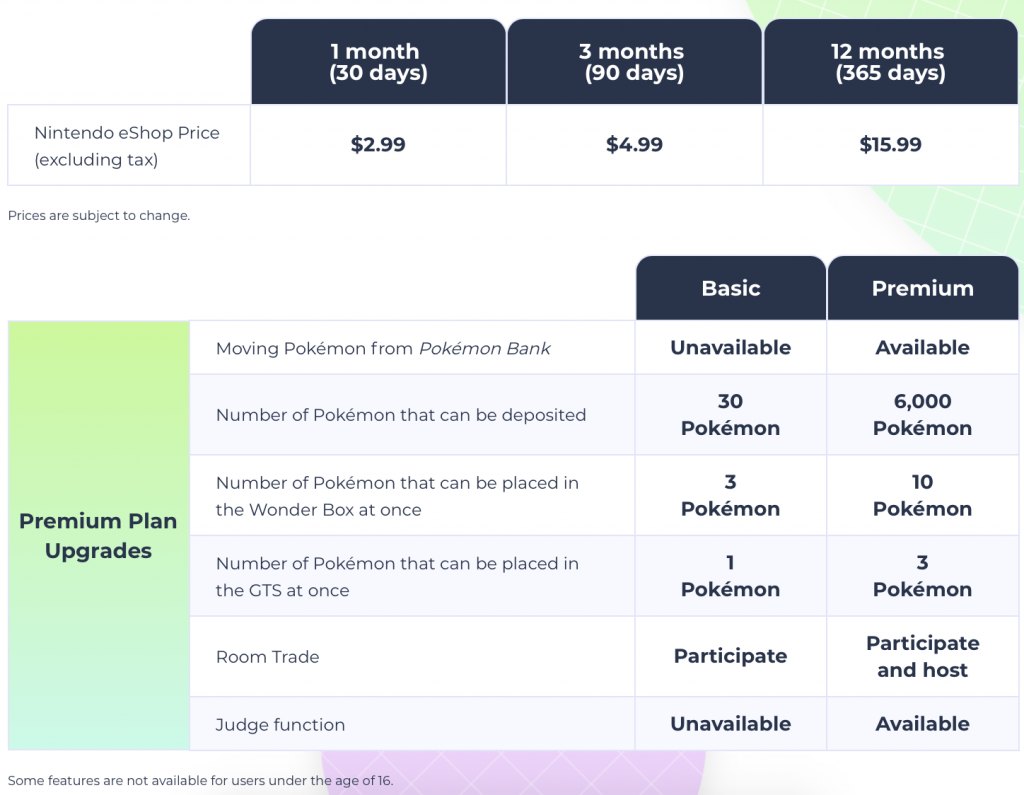 The Good: Trading between Switch games is essentially free.

All the features you need to trade between your Switch Pokémon games are included in the free plan.

The Bad: You have to pay to transfer from Pokémon Bank.

All things considered, this isn’t the worst thing that could happen. It has always been a tad costly to transfer Pokémon if you consider system requirements. But still, you could always enlist help from a friend who had another console for you to borrow, and Bank was stated to be the application that would allow players to keep their Pokémon relevant through future games, to the point where they could share their Pokémon with even their grandkids in the future. Now, players will need to pay for a year of Bank and at least a month of Home (for a total of nearly $8) to transfer, and tack on an extra $3 each subsequent time they want to transfer in the same year (some people do enjoy replaying older games, after all). A free month of Bank is being offered during Home‘s release to alleviate some of the costs, but for latecomers and people who replay older favorites and want to bring their Pokémon into the Switch, they have to pay up. Is it better than requiring multiple Switches? Yes, but that doesn’t mean it can’t be better. Speaking of cost…

The Good: Giving players the choice to pay for only a month or few months at a time is very consumer-friendly for those who want to take advantage of Home‘s features only when they’re actively playing.

If you’re like me, you only play Pokémon games in bursts, then set the game aside as real-life responsibilities, and even other games, force away your attention. Being able to choose to pay for only a month at a time is a huge convenience that allows players to save their earnings and pay only when they know they will be using what Home has to offer.

The Bad: It costs more than triple the amount of Bank to store your Pokémon.

How many total Pokémon are there now? Way more than 30. If you want to store your Pokémon as you could in Bank, you will have no choice but to get the yearly plan and renew it as time passes. Anyone who has a sizable shiny collection, or a “living Pokédex” (a copy of each individual Pokémon), or even a bunch of tradable IV-bred Pokémon, has to shell out more than triple the cost of keeping them in Bank (Home‘s $15.99 compared to Bank‘s $5). Regardless of how one feels about the cost of Home in regards to its other features, the 30 Pokémon limit for the free plan is horrendously unideal and practically unjustifiable. The incredibly advantageous ability to pick and choose the months you want the premium services is completely nullified if you have more than a single box of Pokémon you want to store.

The Good: Using your phone means you don’t have to bring your Switch with you everywhere, and is a natural technological progression.

While the Switch may be a handheld in numerous regards, it is still pricey enough that I can absolutely sympathize with those who may be wary of carrying it outside of the house. But everyone carries their cell phone, so the move to trading through cell makes complete sense considering the communicative element of the Pokémon main series. Just as you could bring a binder of cards to a video game tournament to do some trades in-between games while leaving your decks at home, now you can trade digital Pokémon in-between trading card games without hauling around your entire Switch. Or if on the way to work, where you wouldn’t bring your Switch anyways, you meet someone on the bus who plays—just pull out your phones and you can trade. The possibilities are endless!

The Bad: It doesn’t excuse or improve the clunky nature of trading in Pokémon Sword & Shield.

Trading in Sword & Shield is awkward. The codes are unintuitive and it seems absurd that the phenomenal PSS was left to rot in the 6th generation of games. While Home offers a great way to trade, while playing Sword & Shield, you want the trading in there to be, well, not awkward or clunky. Just because a related external application does it well doesn’t mean Sword & Shield is off the hook.

The Good: It’s back!

The Bad: Being a part of Home makes it clunky to use.

Why was the GTS removed from the main game to begin with? Just as with trading above, while you are playing Sword & Shield, you want to be able to access these basic features in the game itself. I remember when playing on the 3DS if there was a Pokémon I forgot to withdraw from Bank, the process to obtain them was painful. Save, exit the game, wait for the system to load, open Bank, wait for Bank to load, ignore Brigette (no, I do not need 6,000 BP), find the Pokémon and move it to the in-game box, save, exit Bank, wait for the system to load, boot up the game, mash through the opening cinematic and menus, withdraw my Pokémon, and get back to my business. While this was annoying, it was at the very least understandable due to the Pokémon being in Bank itself. But imagine having to do this every time you want to use the GTS! Home should offer a supplemental GTS feature, not the only GTS feature.

The Good: IV checking is an essential feature, just as being able to see your Pokémon’s stats, Ability, nature, etc….

You should always be able to see your Pokémon’s IVs.

The Bad: Why is it a premium feature?

You should always be able to see your Pokémon’s IVs! Especially if you will be trading them!

The Uncertain: Will this feature be removed from future games to entice purchases of the Home premium plan, just as GTS was?

Some have been quick to defend the GTS’s exclusion from Sword & Shield due to its inclusion in Home despite the clunkiness that will result from this implementation. Could this possibly be the case for the IV checker in future games? Excluding it from the main games to entice players to shell out for a Home premium plan? IV checking is possible in Sword & Shield, and it has to be: there were planned competitive events for the games before the release of Home. But once Home is released, future games won’t have its absence to fall back on. Game Freak did not consider the awkwardness of separating the GTS from the main games, so who is to say they won’t do the same for the IV checker? And if it comes to pass, imagine just how hellish it would be to breed for IVs when you can only check them in Home.

The Good: This is exactly how Home should be treating its supplemental features: in conjunction with their inclusion in the main games.

Spoilers: there is no “bad” or even “uncertain” for the Wonder Box. You can Surprise Trade just like normal in Sword & Shield, but Home gives you more. While in the games themselves, players can Surprise Trade, while in Home they can mass trade through the upgraded Wonder Box. This is exactly how the GTS should have been handled, and I hope it is how the judge feature continues to be: included in both the main games and Home, with Home offering an extra convenience to justify its cost. The execution of the Mystery Box in conjunction with Surprise Trades in Sword & Shield is the pinnacle of Home integration with the main series.

If only the rest of Home, and Sword & Shield as an extension, had been handled this way, I would have happily considered Home to be a perfect spiritual successor to Bank. But Home has its flaws, and the games it needs to even function have its flaws, too, which compounds them. The cost of storing Pokémon in Home is far too high. Trading seems to be great in Home but is clunky in Sword & Shield. And the overall treatment of the GTS and what it could possibly mean for future features that have now found a home in Home makes me view Home as I do the majority of recent mainline Pokémon titles: great ideas with most having questionable execution that could absolutely use more polishing. If we could see the GTS return to the main series with the next installment, and perhaps even see the premium fee be split into two—one for storage, one for all the other features—then Home would absolutely be a home-run.

Edited by bobandbill, HeroLinik, and Sheep.