We all know not every Pokémon made it into the Galar region of Pokémon Sword and Shield. Even fewer got their own special Galarian form or evolution, such as Weezing, Ponyta, and Corsola. The next best thing, of course, is to come up with our own Galar forms and evolutions! Like our previous Make-a-Mega and Alolan Mix-Up articles, we’re showcasing ideas by members of the PokéCommunity for existing Pokémon that’d fit right into Galar. This includes forms and Pokédex entries, adjusted stat distributions, new Types and Abilities, and even art! Gigantamax forms are possible too.

For the first edition, we present a series of takes on the Mushroom-based Pokémon from Hoenn, Shroomish and Breloom. Their visas may not have been approved, but what about these different takes on them?

Pokédex Entries:
[Sword] It strikes its claws against each other to start fires. It will generously feed anyone it meets, but complaining if you don’t like its food is very dangerous for you.
[Shield] Breloom cuts up fresh ingredients every day and cooks large meals for the whole forest to attend. More satisfied guests give it higher rank among others of its kind.

Its signature Ability is Gourment Treatment, which does the following: All effects of Berries consumed by self and allies are doubled, if applicable. While this won’t affect Berries such as the Lum or Pecha Berry, it will allow e.g. Oran or Sitrus Berries to heal twice as much, and let type-resistant Berries such as Occa or Rindo minimise super-effective damage to a quarter. Natural Gift’s power would also be doubled, if it had made it into Galar. This is pretty much the same as Appletun’s Ripen Ability – only NikolaP came up with the Ability prior to Pokémon Sword and Shield‘s release.

With teachable moves (via TMs and TRs), most Fighting-type moves are removed, except for widely learned ones like Brick Break, while Fire-type moves like Flamethrower, Fire Blast, Will-O-Wisp and Overheat are added. Stone Edge is removed; it has too much of a Fighting-type vibe to it (Rock Slide stays). Appropriate slashing moves like X-Scissor and Night Slash are added. And no cook is complete without the ability to spray enemies with hot cooking water – that is, Scald!

As it evolves from regular Shroomish, it keeps all of its Egg moves, so it can learn Drain Punch or Focus Punch, but only through breeding.

Pokédex Entries:
[Sword] Gigantamax energy filled its hat and took it off its head. The liquid within is maintained boiling hot and ready to fire.
[Shield] It rains great balls of fire on anything that moves. Being bald apparently irritates it and worsens its already nasty temper.

Camouflage patterns all over, fire streaming from the nostrils, loaded hat at the ready – for Gigantamax Cook Breloom, having a hair-trigger temper is not a metaphor.

The hat is now basically a rocket launcher cooking its ammunition in the bottom. The horns on the hat have become two-pronged stands that support the hat on the tail, where the spikes now burn like a stove. The leftovers of the hat on the head look either like a hairnet or a wide-brimmed World War I style helmet.

Breloom’s G-Max Move is G-Max Fireball, a transformation of its Fire-type moves. It has a Smack Down effect – that is, it knocks Flying, Levitating, etc. Pokémon down from the sky like an anti-air missile.

This mushroom chef is based on the tinder fungus. This fungus has been used for starting fires since ancient times: when dried, it catches sparks very well and smolders, so it can be put among twigs and such to ignite them. The way Cook Breloom generates fire with its claws is inspired by the way an actual tinder is used: struck against a piece of flint to produce sparks.

There is also the obvious cooking theme. Front neck frills have been extended, granting it an apron with a tasteful Shroomish-spots pattern. Its hands now have a single claw rather than two, which act as cooking knives, and its feet now have hooves. Both of these resemble the tinder fungus.

No chef is complete without a chef’s hat, of course. This isn’t just for show though; it becomes the basis for Gigantamax Cook Breloom. Here the hat becomes a rocket launcher for an over-the-top soldier motif. This form was also inspired by the stereotype of vain, short-tempered chefs: it is constantly angry, has flaming mustachios and is at war with food critics. Literally.

Finally, Gigantamax Breloom’s tail and hat looks like a gun in profile – the spot on the tail is meant to evoke a screw on the handle of a gun.

Development tidbit: In early stages, this Breloom wasn’t supposed to be a chef at all, but a Victorian maid with one of those old fashioned bonnets (think A Handmaid’s Tale) made of tinder fungus like its claws. Once it became a chef, it still had a broad, flat tail like a frying pan for a while, meant to catapult fireballs in battle. The Gigantamax form’s hat was a cauldron of hot oil worthy of a besieged castle before evolving into a comically large firearm.

[Sword] Its toxins have hallucinogenic effects. They are so powerful they even affect the Shroomish that produces them, leaving it largely unaware of its surroundings.
[Shield] It stands out with bright colours and glowing spots. This helps other Pokémon avoid it, as it is always disoriented and expels poisonous spores whenever it bumps into something.

[Sword] Hallucinations led it to enlightenment, so it emits them to others in an attempt to share wisdom. This mostly just leaves those around it horribly confused.
[Shield] It is very friendly and dislikes fighting, preferring to dissolve aggression with mood-altering spores. The sound of its bells is a sign of peace.

Getting angry while cooking? Hippie Breloom thinks you should just chill out instead. Boasting another unique type combination in Poison/Psychic, this line evolves from a red, confused Galarian (Hippie) Shroomish into a Special Attacker. It’s also more defensive than regular or Chef Breloom.

Their signature Ability is Seeing Spots, with the following effect: The Pokémon mesmerises opposing Pokémon upon entering battle, lowering their Special Attack stat. It the long-expected special version of Intimidate, and grants it further survivability as a result.

Outside of the level-up moveset, Hippie Breloom has access to other defensive moves such as Reflect and Light Screen, fitting the helpful personality of this species of Breloom. It also can make use of offensive moves however, such as Energy Ball, Dazzling Gleam, and standard Poison and Psychic-type fare like Sludge Bomb and Psychic. From Egg Moves, it can gain access to Toxic Spikes.

Lastly, it sports a special unique move in its level-up moveset, Psychedelic Wave. This move is a Psychic version of Lava Plume, with a base 80 Power, 100% accuracy, and a 30% chance to induce confusion on the target. Its description goes: The user emits strange, surreal thoughts at all Pokémon in battle. It may cause them confusion.

Basis for the Hippie Shroomish line

These Galarian forms were inspired by the fly agaric fungus, the single most iconic poisonous mushroom in the world. Three key attributes are here: one, its iconic red colouring with white spots; two, it is poisonous; and three, it contains hallucinogenic compounds. All three aspects are used for Shroomish, down to its typing (Poison/Psychic), and hippie motif upon evolution (drawn from, well, what hippies did with crazy mushrooms).

Hippie Shroomish sticks to a two-colour scheme, akin to the mushroom it is based upon, in normal circumstances. Its spots however glow blue in a random order when using a Psychic-type attack. It has swirly eyes to convey its unstable, confused look, and its eyebrows raised rather than furrowed in Hoenn Shroomish. It has rounder and denser frills, and more spots, even on the underside. It has a wavy frilly pattern on its feet, and a sole white spot on the top of its head. It expels spores from underneath its dress-like hood.

When it evolves, Hippie Breloom retains red and white as its main colours, but also sports purple and blue features (e.g. claws and leg frills). It has jingle bells on the top of its tail, and flowered sleeves along its characteristic stretchy arms. Its hat has frills, as do its ‘pants’ which cover its legs. Its expression is an absent-minded smile, with its bright blue eyes half closed. Meanwhile, its spots are arranged to appear like flowers, a typical symbol of hippies. Like Hippie Shroomish, when attacking with Psychic-type attacks, its spots glow a different colour (white spots glow blue, and red spots glow purple). 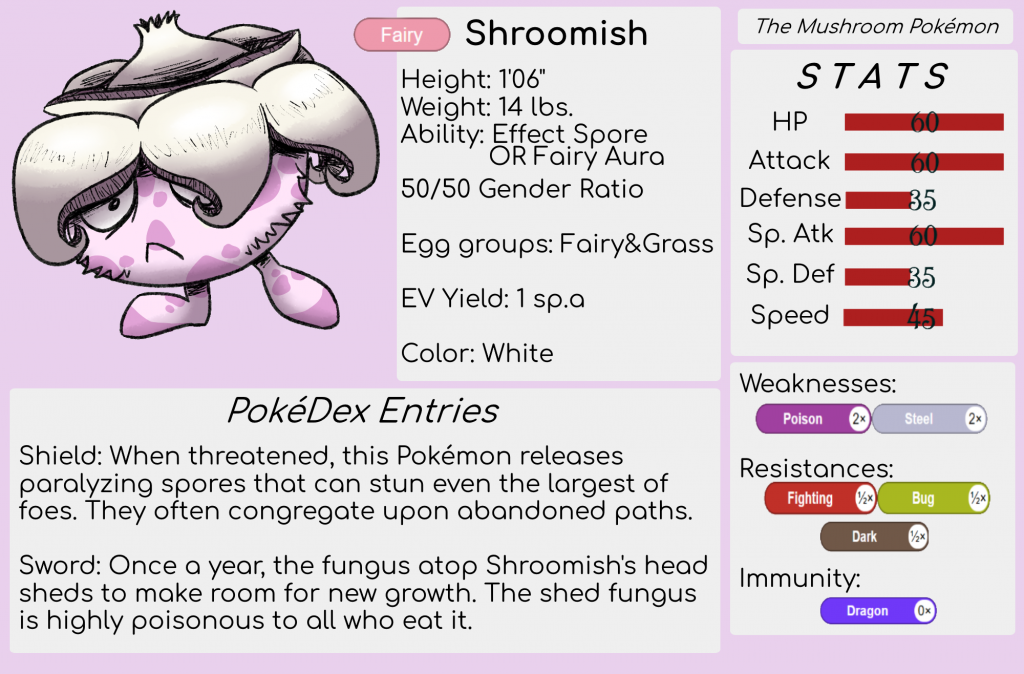 A Fairy-type mushroom gives Morelull some competition! Unlike other Shroomish it has a very distinct mushroom shape to it. They form packs, much like regular/Hoenn Shroomish and Breloom. This Shroomish is based off of the Collared Earthstar (Geastrum triplex), which has a distinct frilled shaped to it. It is also inedible, hence the Pokédex description for the fungus shed by Raptor Shroomish.

It has more offensive stats than typical Shroomish, at the expense of lower defenses. That leads to its evolution… 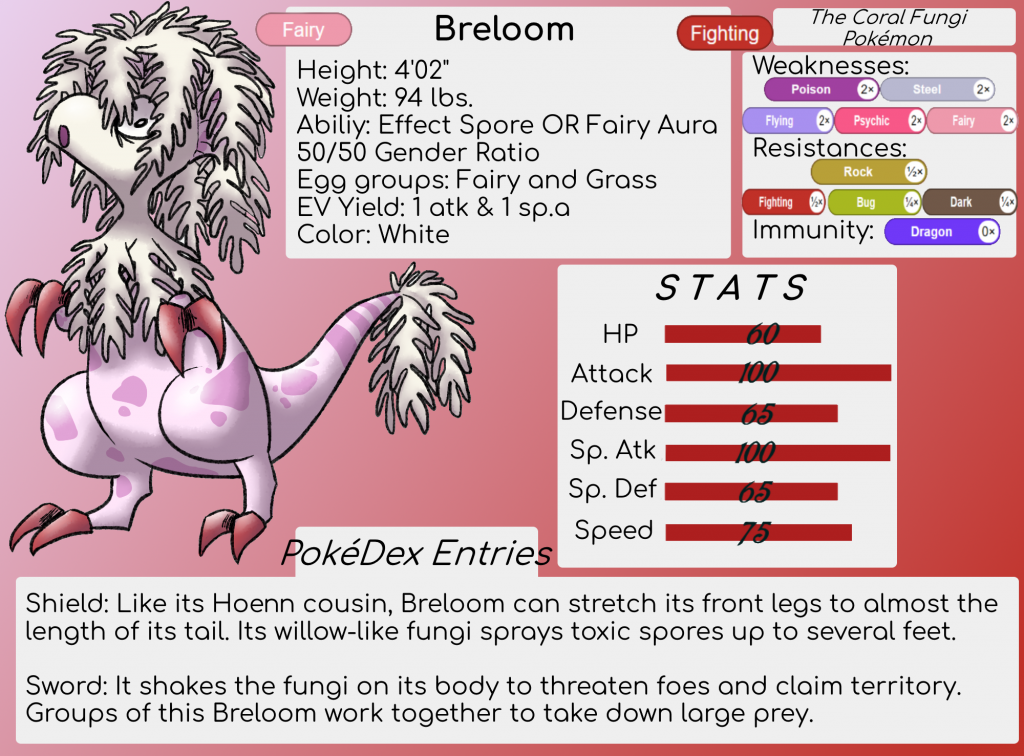 This more dinosaur-themed Breloom continues the mixed attacker theme, with a tad more speed than Hoenn Breloom, but fairly poor defenses behind it. It also gains the Fighting typing, matched by notably sharp claws on its arms and feet – hence the Raptor naming. The fungus this Breloom is based upon is the Coral Tooth (Hericium), which is a white and fleshy mushroom that grows on dead or dying wood.

The spots on Breloom are much more dino-like, and add a sickly feel to the Pokémon; perhaps based on the fact the mushroom tends to grow on dead or dying wood. Now that’s a darker concept to consider! 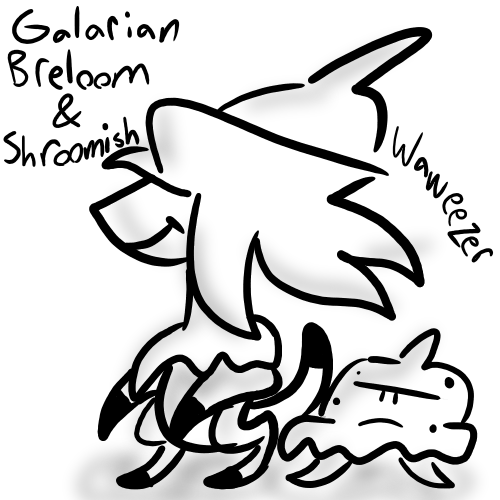 As with Raptor Shroomish, this design is based on the Collared Earthstar (Geastrum triplex) mushroom. However, here the fungi has remained as part of the Breloom design as well, with its distinct shape covering its eyes and giving it the appearance of hair. It also sports a long spike, as if wearing a hat, and a long neck.

Which is your favourite Galarian design? Keep an eye out for the next set of Pokémon we’ll design on the PokéCommunity forums!

Co-written by bobandbill and NikolaP, with designs and descriptions provided by Cici Sama, NikolaP, and Waweezer.
Edited by Aldo, Avara, Sheep and Siddhar.
Cover image by Sheep, mushroom vector from freepik.