There are only a few days left in the Pokémon Masters Legendary Event featuring Giovanni and Mewtwo. It won’t be too bad if you’re unable to power-up Mewtwo all the way—the event items won’t expire from your inventory, so you’ll get to keep whatever you don’t use and have a head start when the event returns sometime in the future. But most people still want to complete all the levels for the first-clear rewards, including the co-op Super Hard mission.

Super Hard on co-op gives an entire single scout—300 gems—upon first clear. It really isn’t worth trying any more after that, since it only gives Blends, Tonics, and Ades after that (and at a 99% chance, so if you’re really unlucky you may not get them!). It’s that first clear that you’re after. The problem is getting that first clear at all.

If you haven’t been scouting—saving your gems for your favorite Trainer, perhaps—then there’s no need to fear. You can still complete all the content the game has to offer, including the Super Hard event stage. 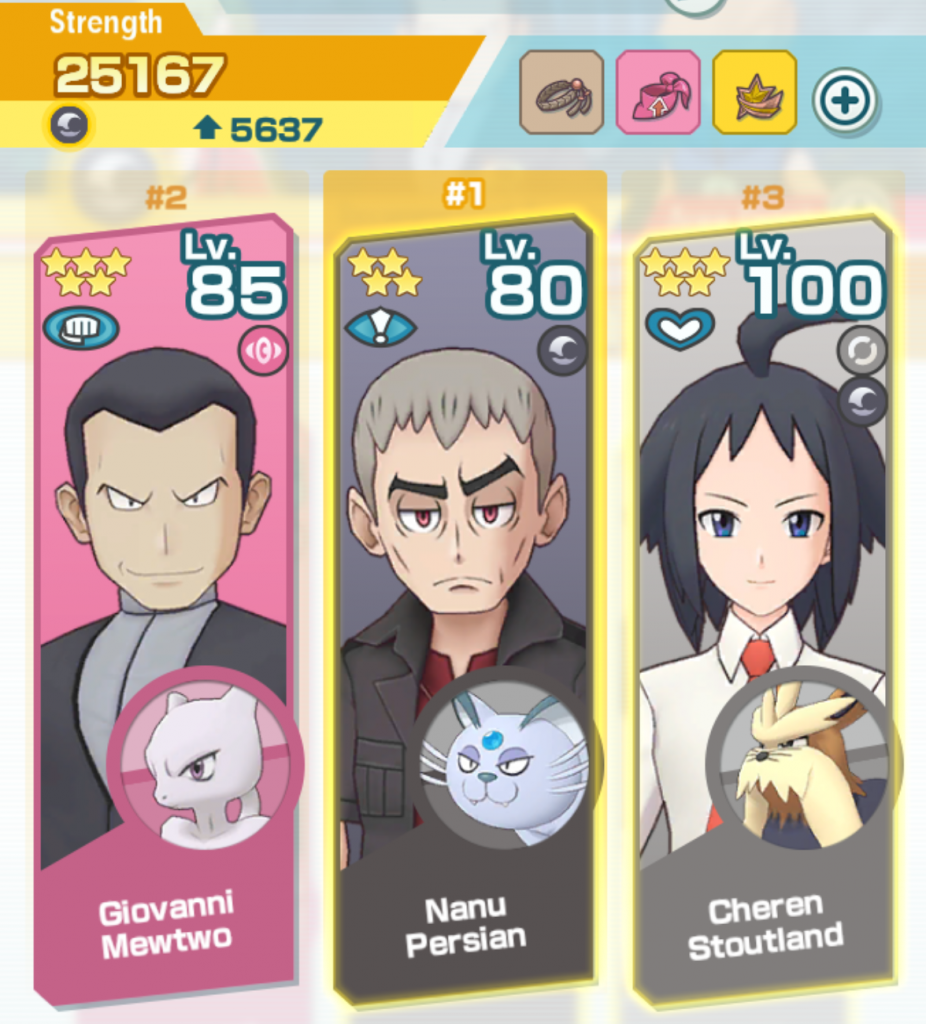 You’ll want to have completed enough of the story and event to have Cheren, Nanu, and Giovanni himself. When I cleared Super Hard, I had done approximately 70 runs of various difficulties in the event, so he was capped at Lv. 85 and had a few of the custom power-ups—I definitely recommend those over the extra copies of him for the first time you clean out the rewards shop. The extra stats add up greatly while the powered-up sync move that comes from getting dupes is more of a bonus for once you’ve completed building him. He had the attacks Psychic and Nowhere to Hide, but not Shadow Ball or his passive—again, these are with the materials obtained from approximately 70 runs, mostly on Hard with a little Very Hard and just the daily Normal. The daily bonuses really help with obtaining Giovanni and powering him up. Cheren and Nanu were maxed at Lv.100 and Lv.80 respectively, and had all of their attacks and passives. I haven’t used any of the 5-star power-ups from previous events yet, so if you used yours on other units, no need to fear. 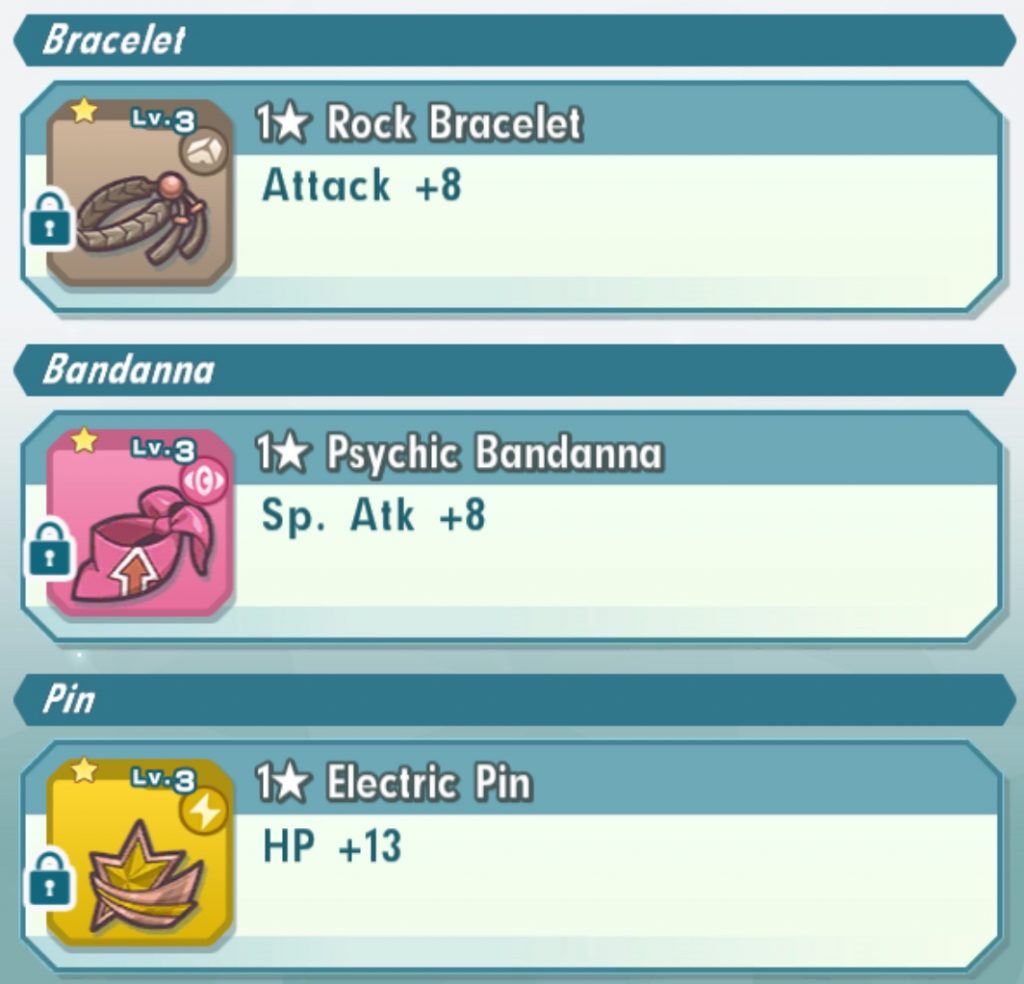 This is the gear I recommend. This is all obtained and upgraded by clearing Very Hard story chapters in co-op. There was a set of missions for clearing each one twice not long ago, and I also used my free units to clear them. You don’t get a Dark Physical boosting gear from these, so the bracelet is just one I invested in for Brock and is there for the minimal boost. In reality it can be replaced by anything with a +8 increase. For the special gear, I’ve upgraded both Electric and Psychic because Hau and Calem are great investments and benefit from the gear greatly. In this case, you’ll want to use Giovanni over Calem because at Super Hard difficulty Thunder Wave will not affect the enemy Mewtwo, but the Psychic Bandanna still works all the same. You can also obtain the Psychic Bandanna from the Marshall EX challenge if you’d like to try it out. There isn’t an HP pin from the story co-op levels that boosts anyone we’re using, so again we opt for the one that already has investment just to get anything extra.

The strategy is straightforward but does take some luck to go just right. You want to start with Nanu and Alolan Persian and use both of your Just Warming Up skills right away. It may seem like you’re wasting one of the guaranteed crits, but depending on your teammates, you may be targetted first, and Persian is too frail to live more than two attacks even if an allied Brycen used Haze. Your chance to evade attacks will be crucial even if you aren’t being targeted, because Lunatone and Solrock know some spread moves—moves that hit all opponents—such as Blizzard and Earthquake. You definitely want as much chance as possible to dodge them.

Your first order of business is to spam Bite on Lunatone (right). You and your teammates should focus on him until he is KO’d. If you can sneak in an X Speed to dish out more Bites, feel free to go for it if it seems safe. If you and your team manage to get in a unity attack, either before or after Lunatone is KO’d, stay in with Nanu so you can get the super-effective bonus while also keeping your evasion boosts.

Once Lunatone is down, your teammates should begin focusing on Solrock (left). She has very high defense and there is currently no free Dark special attacker, so your task will be a bit different. Use Screech on Mewtwo up to 3 times. Sync moves do not revert stat debuffs, so you will be preparing Mewtwo to be taken out later. If you manage to get all your Screeches in and the Solrock is still around, you can Screech it as well to help support your team.

Eventually Mewtwo will get to his first Sync Move. It does not matter if he has been Hazed or Snatched, the sync move WILL KO whoever you have out. Now is when you let Persian tank it.

You will send out Mewtwo. Use Nowhere to Hide twice, again for the evasion boosts. Here is where things get a little tricky. If Solrock is still around, do NOT attack it. The biggest luck portion of this fight comes down to if you can dodge Explosion, which is possible but not guaranteed even with your evasion boosts. If you select Psychic (you should only ever use Psychic and not Confusion with Mewtwo, as Confusion is very weak) and get KO’d, you will not get your bars refunded. This goes for any time you get KO’d—be careful to not select attacks when you know you are in danger of taking a lethal hit. If you are fast enough to get in both Nowhere to Hides and you can select Psychic before Solrock selects Explosion, you can do so only if you think it would be enough to get the KO. Otherwise you’ll want to either wait or target Mewtwo.

If you dodge the Explosion, or the Solrock was defeated before she could use it, fire off some Psychics at Mewtwo to make the most of your boosted evasion before you are KO’d.

You keep Cheren for last because Crunch is stronger than Persian’s Bite and Apply Yourself is a fantastic support move for both you and your allies. The extra bars could be the difference between getting KO’d or unleashing an attack, and if your allies have saved their heavy hitters such as Karen or Grimsley for the end, it can make an enormous difference.

My recommended strategy, since you can’t see your allies’ bars, is to use Apply Yourself when you have 2 or more bars to go to use Crunch. If you have just under a bar left, it’s best to wait it out. If you’re lucky, with the constant super-effective hits, you might be able to get in another unity attack for one last major source of damage. Remember that unity attacks reset the inputs, and you are refunded your bars. For instance, if the turn order was Dark Pulse, Mewtwo’s sync move, and Crunch, but the Dark Pulse activated the unity attack, while the animation is happening and switches to show Mewtwo getting hit, you can input your Crunch and have it occur before the enemy AI re-inputs their move. This is the case in all battles, and I recommend you do it whenever possible. The enemy Mewtwo is incredibly bulky and a unity attack may not be enough to take him down even when his health is low—don’t take any chances and be sure to get that extra attack in!

Ultimately, as a player who does not scout for sync pairs, your job is to support your allies. They will almost always be stronger than you due to the circumstances, so you want to make things as easy as possible for them. This includes considering when you use your sync moves. Always target the proper rock, Lunatone or Solrock depending on who is remaining (although ideally Lunatone will be gone before you can get your sync move fired off). They both have Potions so if you target Mewtwo before they are KO’d, your damage will be for nothing as the Potion will heal him back up completely.

Sync moves also temporarily draw aggro—they make the opponents target you even if they have already inputted a command! They can change targets unlike the player. Use sync moves strategically to protect your stronger teammates—although if everything goes well, your Persian will only be KO’d by the first sync move and you won’t need to redirect aggro anyways. The best course of action would be to save your sync move so either your Mewtwo or Stoutland tanks a dangerous hit in place of a stronger ally such as Houndoom or Liepard.

I used quick connect, so my allies were random every time. This is another place where the luck factor comes in. This fight is extremely difficult even with a fully decked-out team of strong scouted 5-star sync pairs. This section is mostly for people who do have these sync pairs and want some extra tips on how to use them, or if you do have some of these sync pairs and want some ideas for integrating them into your strategy.

Smart play from Brycen is required. Will’s Our Power is Limitless is great, but does not remove the enemy’s buffs, leaving them too strong. Similarly, Grimsley should be saved for the end. Snatch removes the enemy’s buffs, but he can only use it twice and the very first buff applies to all opponents. Haze must be used to weaken Lunatone and Solrock, or else they will KO all their targets, leaving you to tank the first sync move with a more crucial team member and perhaps even lose to Explosion afterwards. Earthquake especially is a calamity if the Solrock is left buffed.

For Brycen, I do not recommend starting with Stone-Cold Endurance. Just wait for Giovanni to buff, then Haze and switch out to someone stronger who can help take out Lunatone. Also note that endurance does NOT protect against sync moves! It is better to let someone else take the Sync Move, then move in with Stone-Cold Endurance to tank the Explosion. Then you can Haze if there is no Liepard to Snatch Giovanni’s buff.

Grimsley wants to be kept until the end because once Mewtwo is the only remaining enemy on the field, it is safe to Snatch his buff and Grimsley’s own buffs on top of it make him a force to be reckoned with. Grimsley’s sync move is also powered-up against enemies with no buffs, so it is great to save for close to the end.

Depending on your other teammates, Karen is also a good choice to save for last. In the end though, it is crucial to be smart about when you Haze, when you Endure, when you Snatch, and who you send out first to deal with the rocks before tanking the first sync move. 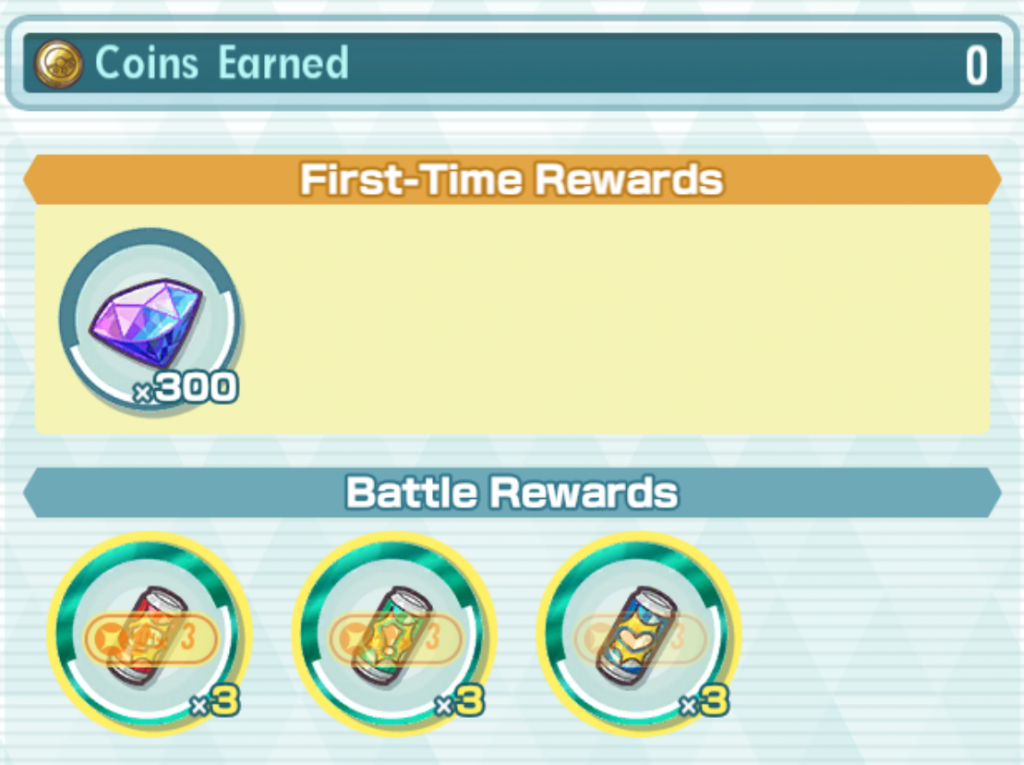 It’s going to take a lot of tries, patience, and even luck to clear Super Hard in Lurking Shadow, but once you do, you’re done! There is just a first-time clear bonus of 300 gems, and the drops are just power-up drinks and not any of the vouchers or power-up materials used for Giovanni and Mewtwo… but it’s incredibly rewarding to finally achieve victory! We hope this guide gives you some ideas and helps you out in clearing this challenging stage!

Edited by bobandbill, Dragon, and Janna.