When Galarian Weezing was revealed, it caused quite the stir amongst the Pokémon community. Partly because it was another regional variant of one of the original Kanto Pokémon, partly because it is extremely suave for a Weezing but mostly because of its unique Ability, Neutralising Gas. So, after all the excitement, with Sword and Shield now available, was the hype justified?

Neutralising Gas renders all other Abilities on the field ineffective and there is no denying that this is potentially incredibly useful. This renders Magic Bounce incapable of deflecting Hazards, Taunts and status afflictions (among other things), leaves slower Taunt users vulnerable, makes Wishiwashi fodder for anything in existence and, perhaps most exciting, in a Doubles environment, cancels out your own Pokémon’s harmful abilities like Truant. Slaking, Regigigas or Archeops paired with a Neutralising Gas Galarian Weezing could certainly be a lot more viable.

On paper, all this sounds amazing. However, upon closer inspection, some holes start to appear. The first of these complications is simply the Galar Pokédex. On account of the absence of many Pokémon in Generation VIII, Regigigas, Slaking and Archeops are not available for use. So the appeal of Weezing in Doubles quickly takes a hit. Unfortunately, the problem doesn’t stop there. There’s also not a great number of Pokémon with abilities such as Magic Bounce, Prankster or Magic Guard present either, especially before all Hidden Abilities are released. Furthermore, several of the Pokémon that Galarian Weezing would be harmful to with this ability are capable of doing serious damage to Weezing in retaliation.

That isn’t to say that Neutralising Gas would have no impact on other Pokémon, or potentially throw off an opponent relying on abilities like those previously mentioned. Not having access to Abilities is almost always a hindrance, and does greatly reduce the impact many Pokémon can have on a battle. Most Pokémon, however, have use beyond just what their Ability allows and can at least function in battle. It’s only Pokémon who are dependent on their ability to be viable like Wishiwashi or Sigilyph that are outright countered.

The second major flaw in Neutralising Gas is that it leaves Weezing itself vulnerable. Earthquake is still just as widespread as it was in the past and without Levitate, Weezing becomes easy picking for a very large percentage of the Galar Pokédex. Simply put, you’re much better of sticking with the old standard, Levitate, than using Neutralising Gas. Neutralising Gas isn’t a bad Ability by any means, it’s just wasted on Galarian Weezing who, largely, lacks the tools and environment to capitalise on it.

This does not mean that Galarian Weezing has no use at all though. By returning to the use of Levitate, you gain access to something very rare; a Poison type that isn’t afraid of Ground moves. In fact, thanks to Levitate, Galarian Weezing is left with just two weaknesses but five resistances and two immunities. With its base 120 Defence stat, this means it could potentially be a useful defensive pivot. 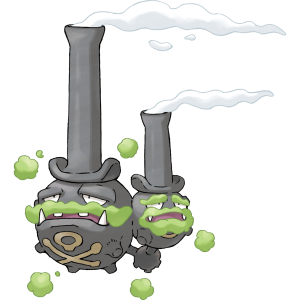 Galarian Weezing also retains its access to all of Weezing’s great utility moves such as Toxic, Toxic Spikes, Haze, Taunt and Destiny Bond with excellent additions to that movepool in Aromatherapy, Misty Terrain and Defog. This means that Galarian Weezing not only has the ability to weaken your opponent by inflicting status conditions, removing stat buffs and the like, but that it can also protect your team from similar tactics.

This means that Galarian Weezing not only has the ability to spread nasty status conditions, prevent the use of status moves or take an enemy down with it when it faints but also to protect the rest of your own team from those same status conditions and reliably remove Entry Hazards.

Finally, Galarian Weezing may only have fairly average offensive stats, but it does have a fantastic offensive movepool and they’re far from being terrible. With access to powerful STAB moves such as Sludge Bomb and Strange Steam as well as excellent coverage options like Flamethrower or Dark Pulse, Weezing may not be able to sweep, but it can potentially take a sizeable chunk out of a Pokémon coming in to check it before switching out or even faint a frail enough foe.

In summary, the hype around Galarian Weezing’s Neutralising Gas was probably unfounded for the most part. The ability is not bad at all, but it doesn’t suit the Pokémon it was given to and it was never going to be meta-defining. That being said, Galarian Weezing is more than its Ability and it does possess an array of very potent tools in a solid stat spread, exemplary support movepool and typing and wide coverage. It’s too early to say for sure exactly how Galarian Weezing will do in these new developing metas, but with the right team by its side, it’s safe to say that it does have potential and in some ways is superior to the original.