With each set’s imminent release, The Pokémon Company reviews the Expanded Format, which contains all cards released since the Black and White set, and on some occasions ban cards from the format if they deem the card unhealthy.

Earlier today, however, the pokemon.com announcement of the bans was very quietly edited to include two more cards – Lusamine (Sun & Moon—Crimson Invasion, 96/111 and 110/111; Sun & Moon—Ultra Prism, 153/156) and Delinquent (XY—BREAKpoint, 98/122, 98a/122, and 98b/122). These cards are both banned from Expanded, effective less than a day after their ban’s announcement. This is the first time such a ban has occurred on such short notice. 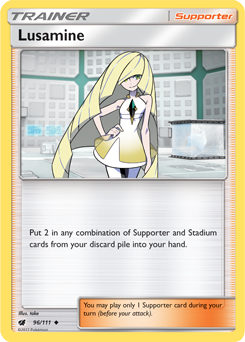 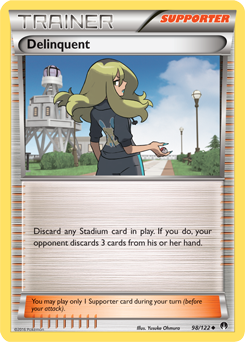 This is likely in response to the sudden popularity of a deck people are referring to as Exodia. Exodia is a well-known set of cards in Yu-gi-oh that are incredibly powerful if you can get them in your hand all in the right order. The deck Pokémon players are calling Exodia (and another variant starring Seismitoad-EX lovingly referred to as Extoadia) relies on incredible draw power to get exactly the cards you need (specifically Red Card, Peeking Red Card, and Delinquent, in that order), which essentially prevents your opponent from playing the game by forcing them to discard their entire hand. Delinquent in particular was essential to this combo, as it forced your opponent to discard 3 cards. Lusamine, on the other hand, was used for many things in a lot of decks, including things like getting back Delinquents and other Lusamine from the Discard Pile to continue to oppress your opponent.

These four cards will join the seven cards already banned from the format starting on February 15.

A former competitive player in both the TCG and VGC, ddrox13 is a writer for the Daily when he is not busy losing his temper at hax, topdecks, homework, Fire Emblem's RNG, or useless ADCs in League of Legends. He is currently known on the Pokécommunity Forums and Battle Server as Decidueye, and is happy to answer your questions about anything Pokémon-related.