Pokémon Duel has released today in English on the iOS App and Google Play stores. In this guide we’ll cover the basics on what Pokémon Duel is all about and how to play!

What is Pokémon Duel? 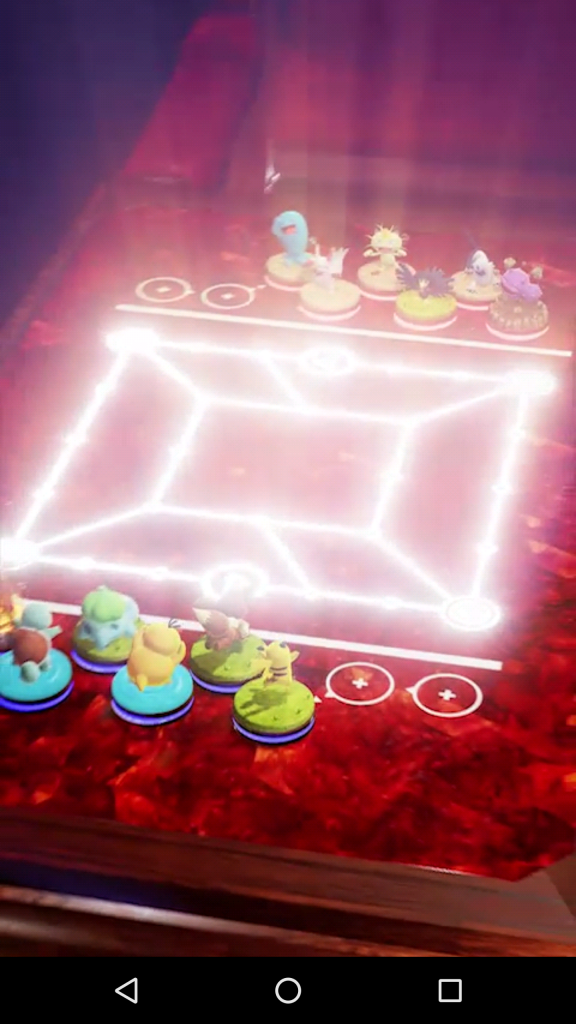 Pokémon Duel is a free-to-play mobile strategy game, loosely based on an earlier Pokémon Trading Figurine game. The game requires a constant Internet connection. By using a party of Pokémon figurines, you fight on a game board against friends or the AI. The aim is to reach the opponent’s goal before they reach yours. You can play aggressively (rushing for the goal) or defensively (block your opponent’s routes first).

Each Pokémon figurine has different strengths and a number of steps they can take on the game board. Battles between Pokémon figurines are determined by Attacks on each Pokémon’s Data Disk. This acts like a roulette wheel. Spin to see which Attack will be used by both your Pokémon and the opponent’s. Strong Pokémon have better Attacks on their Data Disks.

Lastly, there are plates you can use at the start of your turn. These allow you to give power-ups to your Pokémon, or cast special effects such as swapping the positions of Pokémon in play.

A character called Rosé via television broadcast introduces you to Carmonte Island for the PFG (Pokémon Figure Game) World Championships. The prize, incredibly, is a skyscraper. You then converse with Luca, who acts as the tutorial character. Upon landing on the Island you obtain a battle set and mask, and then can customize your character. You then have a tutorial battle.

Following that, you can access the single-player campaign at any time by tapping the bottom right button from the “Leagues” screen and choosing “Quests”. There is actually some semblance of a story too, involving some participants in the tournament such as Luca and, of course, someone trying to thwart the event for personal gain.

The single-player is set up in stages, in each of which you battle against an AI. There are 3 sub-quests on each stage, which range from “Win within 50 turns” to “Win with Taillow in your party”. These subquests reward a few Gems when completed (more on those later). Beating these stages also gives you a 50/50 roulette (coloured red and blue), which gives you a prize (e.g. a Pokémon figurine, or coins). You can redo the stage for another chance at the roulette.

Each stage played costs ‘energy’ to play. This energy is depleted when you go into a match, and is recharged by one point every two minutes. This means that you cannot play non-stop without paying for more energy, or waiting it out. Keep in mind that as you go further in the story, the mission cost increases dramatically.

There is also a training area, which does not require energy and similarly gives you rewards for completing sidequests.

The aim in Pokémon Duel is to get your Pokémon figurines to the goal on the opponent’s side before they get to yours.

A roulette decides who gets the first go. Each player starts with six Pokémon figurines, lined up on the ‘bench’ ready to be positioned on the board. Tap a figurine to see its status and the number of spaces it can move. For the first turn, the Move Points (MP) is reduced by one for all Pokémon. Moving a figure counts as a turn. You can also position Pokémon on your own goal to protect it.

Pokémon can only enter the field from their own Entry points. If the entry point is occupied by your own or an opponent’s Pokémon, you cannot enter from it!

Positioning a figure in a space next to an opponent will initiate a battle. Battles involve a roulette wheel called a Battle Disk. Both yours and the opponent’s Pokémon’s Battle Disk is spun. The higher value Attack will win the battle. However, same-valued Attacks result in a draw and no knock-outs. There also exist coloured Attacks:

Typing has no impact on battles in this game. Because this is confusing, here is a handy guide to what happens in each move matchup case:

Knocked out Pokémon move to a separate Pokémon Centre space off the board, and cannot be used while there. Once three Pokémon are sent to the Pokémon Centre, the first one goes back to the bench, but have to wait an extra turn before they can be used again.

You are unable to use more than three of the same species of Pokémon in your team.

If you surround an opponent’s figure on all sides with your own, you can automatically beat them without even battling. Therefore, be sure to move your figurines around carefully! Note that this requires all adjacent spaces to be filled with your Pokémon, not just two.

Plates grant you special powers, e.g. Meadow Power boosts the damage of Grass-type Pokémon by 20, and lasts until you knock out an opponent. However, Plates are limited in number, so use them wisely!

Status conditions exist in Pokémon Duel which can affect yours and your opponent’s pieces. They are inflicted by Purple attacks, or special conditions of White attacks. Some plates can heal these conditions, and a knocked out Pokémon will be healed as well when brought back from the Pokémon Centre.

Some Pokémon figures can be set up to evolve during combat. This gives them a power boost. To set this up, you must first obtain one figure of each member of the evolution chain.

After a battle, you gain (or lose) points for your Rating. You can also win Key Fragments (3 for a win, 1 for a loss) and Gems, which are used for building your Pokémon team. League matches can give you Time Boosters as well.

You can collect stronger Pokémon figurines, and also raise the level of Pokémon and enhance their Data Disks through fusion. This can both increase the power of your attacks, and reduce the amount of times you could miss. There exist EX versions of Pokémon which have greater power.

Pokémon figures, plates and Gems from the Training Centre can be won by battling instructors with pre-determined teams.

Time Boosters are another way to get new items. These are able to be opened after waiting long enough once you select ‘Unlock’. Rarer Time Boosters (indicated by their colour) take longer to be opened. These can be won from online battles. You can hold up to three at a time, or four if you purchase an additional slot.

10 Key Fragments allows you to open a Locked Booster. You can only open one a day. Winning an online battle gives you 3 Key Fragments, while a loss gives you 1. You cannot gain more than 10 a day.

You can fuse Pokémon with Rare Metal items won from unlocked Boosters. Selecting Fusion from the bottom menu allows you to select different figures to fuse with the Rare Metal items.

There are three kinds of Rare Metals:

Each of these have rareness ratings like the Pokemon figurines, and you can only fuse green Rare Metals with equal or higher rating to the figurine. For example, if you want to give that EX Raikou a stronger attack, you need EX-rank green Rare Metals.

You can fuse figures together too for experience, but you won’t keep the side figures used for fusion. This costs coins to fuse.

You can battle people online via the League Match button on the Home screen. You fight players with similar skill level. Winning such duels unlocks Time Boosters – sets that include Pokémon figures and other items. You also win Key Fragments from such battles regardless of the outcome.

You can have random match-ups, or create a room and accept challenges via that. Room matches can be set up to have a three-digit password.

You can also buy Gems with real money. Booster Packs cost 50 Gems per figure, and for every two figures bought at one time you get one plate as a bonus. Packs contain 50 “material” per figure. This can be traded in for specific figures later. You can also buy plates with Gems.

Let us know what else you’d like to see in the Pokémon Duel guide.

Thanks to colours for images, and colours and ddrox13 for information.