Today the Pokémon Sun and Moon Special Demo was released. A few players have taken it upon themselves to get at the code of the demo in order to learn more information about the full games. Essentially they’re ‘mining the data’ to find out about, say, new Pokémon or Alolan Forms not yet officially announced.

Naturally this is something a lot of players are interested in, so below we’ll summarize what information has been found. We stress that PokéCommunity Daily has had no part in the datamining. We also wish to remind readers that spoilers are within. If you do not wish to know information not officially announced by Nintendo/The Pokémon Company/The Pokémon Company International, we advise you leave the article now!

More information will be updated as it comes.

To start with, we have to commend Game Freak. Base stats are not able to be datamined as such information is replaced with that of Pikachu! Well done – it’s nice to see that some info will be hidden until the game releases. Bonus points for replacing all stats with that of Pikachu too.

UPDATE: Perhaps not. Claims are floating around that the information may not have been fully masked.

Update, 6:03AM GMT+0: The above information has been called into question by Kaphotics, one of the people responsible for the datamining. He has claimed that there are less than 80 new Pokémon in the game, saying that Jangmo-o is placed towards the end of the Pokédex as the pseudolegendary and is #782 in the Pokédex.

There are two more Alolan Form versions of evolution lines (at least?) we don’t yet know about. These belong to Kanto Pokémon.

One of these is for Dugtrio. Source. The other is confirmed to be the Golem line.

As per this source, we see two bizarre galaxy-themed Pokémon with the one on the left appearing alongside Lillie! They look a little like this:

You can find some models below. Still updating with more! 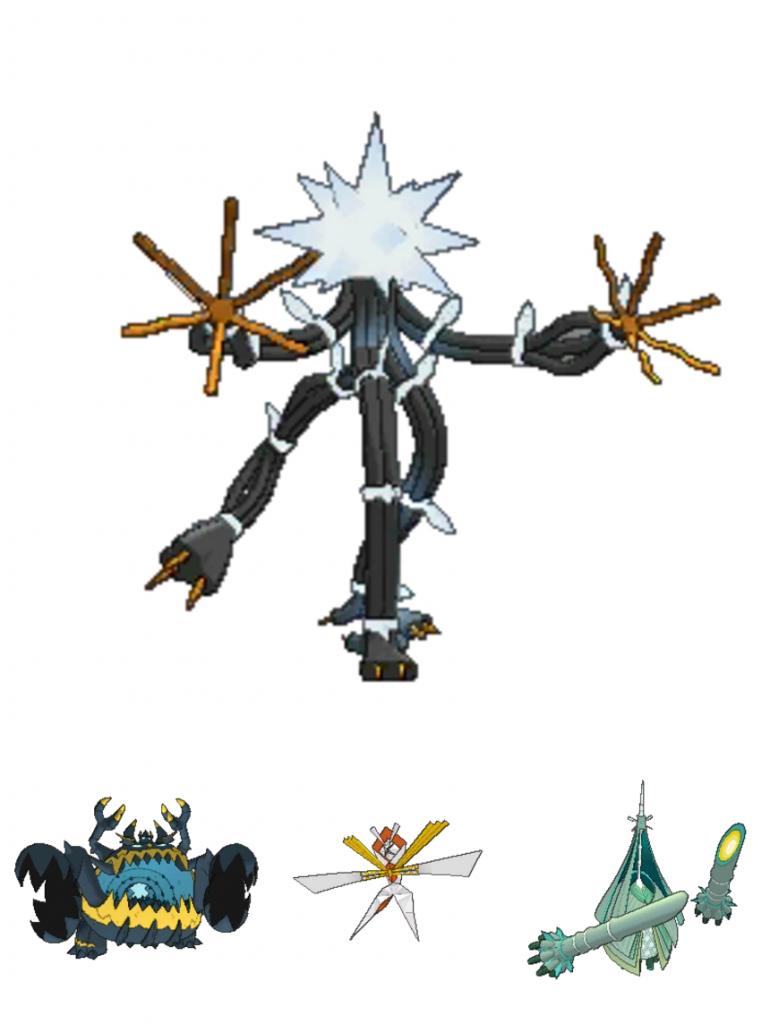 A current list of new Pokédex numbers (following Volcanion at #721) is below. Some descriptions are based on guesswork, and the numbers are yet to be fully verified.

The regional dex is currently believed to be represented by the following image.

The breakdown is as follows:

Ultra Beasts can be captured. Ergo, they are essentially Pokémon.

More datamined info has been discovered.

The new information discovered is as follows:
– There are 98 new moves introduced in the game. 28 of them are Z-Moves;18 Z-Moves are for each type and 11 special Z-Moves for specific Pokémon, such as Pikachu and Snorlax.
– HMs don’t seem to be in the game at all. Moving around the overworld will likely now require the use of PokéRide. Certain HMs are now demoted to being simply TMs. The complete list of TMs is found below:

-There are 920 total items programmed into the game. However, not all of them are likely to be obtainable. This is similar to how the Apricorn Poké Balls were programmed into Black and White, but remained unobtainable. Regardless, this means that there are approximately 145 new items.

– Primal Reversion and Hoopa Unbound are still programmed into the games.
– Confirmation of no new fossils, which is likely due to the fact that Alola is a volcanic region and therefore is not old enough to have unique fossils.
– The Strange Souvenir item is still present in the data.

The last video of the series has been released now.

YouTube user KazoWAR has released a video with all battle intros, using the Professor’s model as a fill-in. Some story-related spoilers are within from reading into the animations and logos used! KazoWAR also states the following:

Some of these are glitched or use the wrong camera angles/animations since the are meant for wild battle or are using the wrong model.